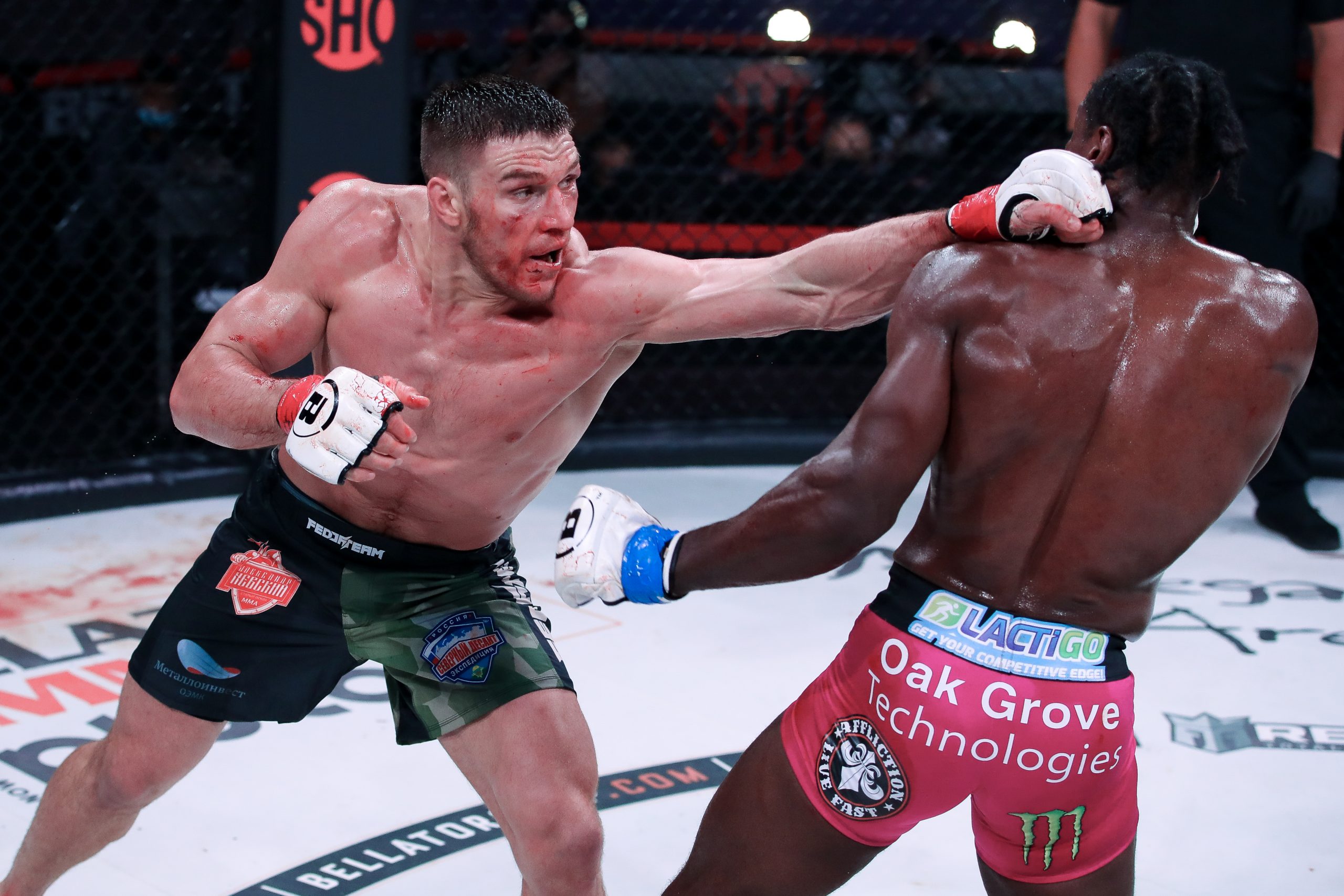 Bellator 268 goes down on Saturday, Oct. 16, at the Footprint Center in Phoenix, Ariz. After a successful year thus far, Bellator has compiled one of their best fight cards of the year.

The main event will be the second title defense for light heavyweight champion Vadim Nemkov. This will also serve as the second fight of the light heavyweight grand prix semifinals. Anthony “Rumble” Johnson was supposed to be the title contender, but an injury forced him out. With the opportunity of a lifetime present, Julius Anglickas has stepped in to fight Nemkov. Although Nemkov has only defended once, beating Phil Davis showed the potential to reign terror over the division.

In the co-main event, the first semifinal of the light heavyweight grand prix will take place. Ryan Bader and Corey Anderson will go toe-to-toe to see who will fight the winner of the main event in the $1 million final. Anderson is 2-0 in Bellator and looks to continue his dominance with a win over the former Bellator double champ.

The preliminary card airs live on YouTube starting at 7 p.m. ET. The four-fight main card follows at 10 p.m. ET on Showtime. Let’s take a look at the preview and predictions for Bellator 268.

Although MMA fans wanted the aforementioned Johnson to fight for the title, Anglickas is an interesting short-notice opponent. Anglickas signed with Bellator in 2019 with a record of 7-1. Since then, Anglickas has won all three of his Bellator fights by decision. On the contrary, Nemkov signed with Bellator in 2018, holding a record of 8-2. Nemkov won four fights with Bellator before knocking out Ryan Bader for the title. After winning the title, Nemkov proved he deserved to be champion by defending his title in a rematch with Phil Davis last April. Both fighters have a bright future with Bellator, but only one can come out victorious at Bellator 268.

Luckily, the main event will be a five-round fight, giving both fighters the chance to execute their full game plans. The main difference is the experience. Nemkov has continued to fight the best of the best during his title run. Meanwhile, Anglickas has shown massive potential, but lacks experience against the division’s top-ranked fighters.

If Anglickas wants to win this fight, he needs to bring Nemkov to the ground. Although Nemkov is well-rounded, Anglickas will have an advantage in the wrestling department. Although, Nemkov has an advantage in striking and may expose Anglickas early on. Overall, Nemkov should be able to retain the belt with a dominant decision win over Anglickas.

The co-main event is the other semifinal in the light heavyweight grand prix with two former UFC standouts Ryan Bader and Corey Anderson squaring off; which man gets their hand raised?

Anderson left the UFC with the hopes of taking over the Bellator light heavyweight division. After winning his first two fights with the promotion, Anderson is now one win away from a title shot. Before focusing on the champion, Anderson will have to beat the former Bellator two-division champion Bader.

At 38 years old, Bader has accomplished plenty between the UFC and Bellator. The light heavyweight grand prix gives Bader the opportunity to avenge his loss to Nemkov, who is the only fighter in Bellator to beat him. After beating Lyota Machida in the opening round, Anderson is the only fighter trying to stop Bader from getting back to a title shot.

Bader vs. Anderson is interesting because of their grappling skills, possibly, cancelling each other out. Both fighters tend to rely on grappling to find success. If the grappling cancels out, we could find ourselves with a slugfest to determine the first tournament finalist. Bader should have the advantage in striking, because of his heavyweight power and agility. Nevertheless, Anderson is younger and improved in his last two fights. Anderson should be able to outwork Bader and potentially get a finish on the ground.

Benson Henderson hasn’t seen the type of success in Bellator that he had in both the WEC and the UFC; does he find a way to pull out a victory over former champion Brent Primus?

Henderson and Primus have the potential to steal the show at Bellator 268. At 37 years old, Henderson has continued to fight some of the best fighters in the world. Although his Bellator tenure started mostly as planned, he lost his last two fights. The first in a rematch with Michael Chandler, and the second to Jason Jackson. Meanwhile, Primus had nearly dominated everyone in his path before losing to Islam Mamedov in July. Both fighters are looking to get back in the win column with the perfect opportunity at Bellator 268.

Primus has improved his striking, but still relies on his grappling to find success. Henderson has a lot of experience and should be able to stay out of trouble on the ground. The issue for Henderson is that he has a lot more miles on his chassis, going into his 39th professional outing. Primus, on the other hand, is a year-and-a-half younger, and only has 12 pro fights under his belt. Although Primus has recently looked better, Henderson should get the win due to his experience advantage.

The sleeper fight on Bellator 268 is the featured preliminary fight between Karl Albrektsson and Dovletdzhan Yagshimuradov.

Albrektsson first fought for Bellator in 2019 when he lost to Phil Davis. After getting another win outside of the promotion, Bellator brought Albrektsson back to take on Viktor Nemkov, Vadim’s brother. Albrektsson got a unanimous decision win that put MMA fans on notice. Meanwhile, Bellator brought in Yagshimuradov as a wild card in the light heavyweight division. Although he lost to Corey Anderson, Yagshimuradov showed he has the potential to become a Bellator champion.

Both fighters tend to get a little wild and finish fights quickly. Albrektsson is faster, but Yagshimuradov has a technical advantage that could pay off. Yagshimuradov and Albrektsson both have a chance to take over the division, but need a big win to earn their respect. With a win over Yagshimuradov, Albrektsson will officially be on the map. On the contrary, Yagshimuradov could put himself in the title discussion with a dominating win over Albrektsson. Stylistically, this fight may not be a must-see, but both fighters are talented and could become a Bellator world champion one day.