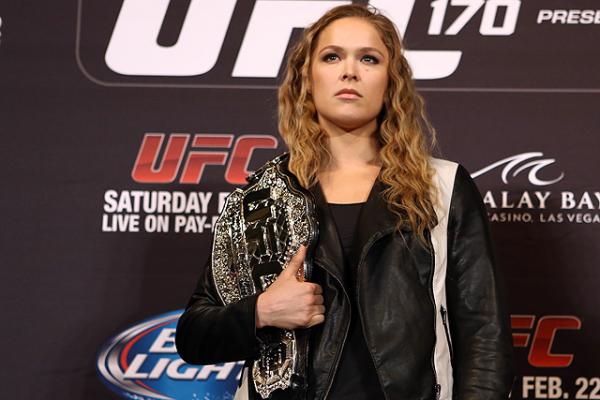 Just when you thought UFC women’s bantamweight champion Ronda Rousey had it all. Fame. Fortune. Roles in films like Entourage, Furious 7 and The Expendables 3. Gracing the pages of ESPN Magazine and the Sports Illustrated swimsuit issue. Experiencing a ride to stardom like few athletes have and being considered a role model for females everywhere. Just when you thought Rousey received enough accolades, there was this:

Congrats @RondaRousey on making the cover of #SportsIllustrated and named SI’s most dominant athlete! On stands 5/13 pic.twitter.com/FAdh5amOxd

The title of world’s most dominant athlete, according to Sports Illustrated. Considering the quality of athletes that populate all the major team and individual sports, the fact SI chose Rousey is incredibly significant. Not just because she’s a woman, a former Olympic athlete and a mixed martial artist who’s only been competing in the sport for five years. This represents another major step toward UFC’s journey into the mainstream, following in the footsteps of its deals with Fox and Reebok.

However, like most awards like this that are given out, it has already generated criticisms from certain corners of the MMA media and elsewhere:

Happy for Rousey/UFC, but Serena Williams is much more dominant if we take the idea of strength of schedule/competitive output seriously.

@julesk_fighter Its not about cutting down women. That headline cuts down a lot of men who are more skilled than any of her opponents by far

First off, lists and accolades like SI picking its most dominant athlete are nothing more than clickbait designed to generate discussion and page views. In that sense, SI hit it out of the park. This topic has dominated the MMA landscape today and would probably get a lot more play in the mainstream sports landscape if “DeflateGate” wasn’t going on.

However, attempting to diminish this important achievement for Rousey, the UFC and women athletes in general is misguided. Again, Rousey has only been competing in MMA for five years. She won the women’s bantamweight title in the first round of her fifth professional fight. She has finished all of her opponents in the UFC in the first round, save for her second fight with Miesha Tate. She made opponents with the same number of fights or greater look downright amateur. She owns two of the fastest finishes in UFC history.

Where exactly is the lack of domination here?

The main argument is that the UFC’s women’s bantamweight division is weak. I disagree. True, Rousey has basically cleaned out the division. She faces Bethe Correia in August, and pretty much everyone who isn’t part of Correia’s camp or family expects another first-round victory for Rousey. Her next challenger is expected to be picked among a pool that includes Jessica Eye, Holly Holm and Cristiane “Cyborg” Justino. Cyborg would present Rousey’s toughest challenge, but that fight is at least another several months to a year from happening, if it happens at all.

Conversely, two of the UFC’s men’s divisions suffer from a bigger dearth of challengers: flyweight and heavyweight.

UFC flyweight champion Demetrious Johnson just submitted Kyoji Horiguchi with one second left in their title fight at UFC 186 last month. Right now, the top three contenders for his belt are John Dodson, Joseph Benavidez and Ian McCall. Johnson has already defeated all three, including Benavidez twice (and in emphatic fashion in their second meeting). After that, the list of contenders includes Jussier “Formiga” da Silva, John Moraga and John Lineker. Johnson has already defeated Moraga, and Lineker continuously has trouble making weight at 125 pounds. Johnson may have very well cleaned out his division.

UFC heavyweight champion Cain Velasquez faces interim champion Fabricio Werdum this summer (assuming Velasquez stays healthy). If Velasquez emerges triumphant, his list of challengers would include Travis Browne, Junior dos Santos and Stipe Miocic. Velasquez has already battered dos Santos as part of their trilogy, and while Miocic was incredibly impressive in his demolition of Mark Hunt in UFC’s recent Fight Pass card in Australia, it remains to be seen if he can hang with a champion like Velasquez who, when healthy, is as close to unbeatable as there is in the sport.

But if the choice of Rousey as the world’s most dominant athlete is going to be criticized for the quality of her opponents, that’s a very myopic view to take. Rousey cannot help who her challengers are. She also cannot help that in five short years, she has already established herself as the clear-cut best female fighter on the planet, and one of the best overall fighters, period.

If any discussion of Rousey’s dominance comes with the caveat that she faces weak competition, the same argument should apply to fighters like Johnson and Velasquez. They are head and shoulders above their respective divisions, but don’t seem to be held to the same standard.