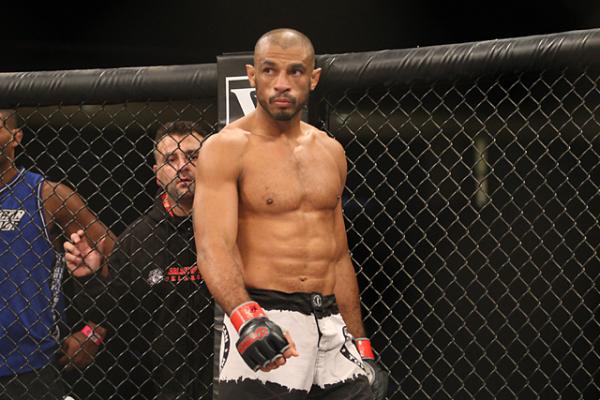 Among non-residents, Wisconsin is most known for the following things: The Green Bay Packers, cheese, beer and cold temperatures, approximately in that order. Yes, this is the time of year in my home state when the temperatures can fluctuate tremendously over the course of just a week. A couple of weekends ago, we actually saw high temperatures hit 80 degrees, which is unseasonably and pleasantly warm for this time of year. Last weekend, though, the mercury dropped considerably, and we saw highs in the upper 40s.

Fortunately, last weekend also brought MMA fans a slew of events to keep them busy in whatever temperature they might have found themselves. Alongside the Bellator and UFC Fight Night offerings was a unique card emanating from Tulsa, Okla., that had hardcore MMA fans buzzing from the day it was announced. It wasn’t that the event would be showcasing one of the MMA’s biggest stars in a featured appearance, nor did the promotion putting it on have any significant championships on the line. Instead, BattleGrounds MMA announced it was bringing back the one-night, eight-man tournament on a card that hearkened back to the sport’s earliest days. Unfortunately, it also likely reminded fans why the tournament format was abandoned soon after MMA became more organized.

Since the first UFC event was intended in no small manner to be a showcase for the then-obscure art of Brazilian Jiu-Jitsu, the tournament format was almost a necessity. To have Royce Gracie enter an enclosed cage against a larger man and defeat him using his family’s signature style would be one thing, but to have him then repeat his success two more times that night would prove beyond a shadow of a doubt that grapplers can compete—and win—against fighters with more traditional striking-based offenses. This is exactly what happened that night in November 1993, and people took notice.

The UFC proceeded with the tournament format for the next few years, first in an open-weight setting and then later in the form of two smaller, weight-based tournaments comprising the fight card. No doubt, the classic UFC setup helped make a number of fighters into counterculture stars. In the single-night tournament, one’s ability to find the mental fortitude to fight multiple times in an evening is just as important as his ability to throw punches and land takedowns, so the men who emerged victorious (and even a few who didn’t) wound up being viewed as legitimately some of the toughest on the planet.

Eventually, though, the UFC opted for more traditional cards featuring a slew of fighters who would compete just once during an event. The company first experimented with this alternative format at UFC 9 before abandoning the tournament structure altogether before the 20th Century came to a close. It was during this time that the UFC struggled to get the sort of positive mainstream attention it would begin to receive a few years later. As a result, many of the sport’s best and most notable fighters competed during this time in Japan’s Pride Fighting Championships. While most of that promotion’s events followed the sort of single match format we see today, Pride FC did stage a handful of tournaments in an effort to showcase the skills of its impressive roster. Mark Coleman would briefly revitalize his career by winning the Pride Grand Prix 2000, a 16-man draw that required Coleman to compete three times on May 1, 2000 to emerge the champion (though, to be fair, his semifinal fight never really started as his opponent’s corner threw in the towel two seconds into the bout). Pride FC would hold a number of other tournaments throughout the course of its existence, making stars of Wanderlei Silva, Fedor Emelianenko, Mauricio “Shogun” Rua and others in the process, though the promotion’s tournaments post-2000 were typically held over the course of two or three evenings and required its participants to fight at most twice in a night.

Aside from these brief departures from the modern matchmaking format, most MMA organizations today simply stick with having a card of a dozen or so fights between guys who will only be competing that one time, and the BattleGrounds MMA event showed why. While many fans (myself included) probably began the event thinking the tournament would be non-stop action, the fighters who advanced past the quarterfinals began to make more conservative offensive choices after all four finished their opening-round opponents inside the distance. By the time the finals rolled around several hours (and no doubt several fluctuations in adrenaline) after Roan Carneiro and Brock Larson first stepped foot in the cage, both were pretty much looking to survive rather than to savage.

This is certainly not meant to disrespect the effort of the two tournament finalists. Just the opposite: When a person must fight three times in one night to capture a tournament title, it’s only reasonable that his gas tank would be mostly depleted by the third fight. This is probably the main reason why a one-night tournament is no longer a viable option in professional MMA. That is, the quality of the contest is severely degraded as the night goes on, simply by virtue of the human body’s physical limits.

Then there’s the matter of money. Sure, having a one-night tournament means filling out a fight card with fewer fighters that the promotion must pay to appear, but this formula really only works for promotions that are making business decisions on a card-to-card basis rather than looking at a longer-term plan. Why would the UFC or Bellator stage a single-night tournament when it could instead make three times as much money by stretching one out over the course of a number of cards? Why would a promotion looking to cash in on the popularity of one of its fighters trot that man out for three fights in one night when it could instead promote three cards with that fighter in the headlining spot?

Here’s the bottom line: A one-night tournament is fine as a gimmick event. Hell, I happily threw down my $20 plus taxes and fees to watch BattleGrounds MMA last Friday and, to be honest, I’d consider doing so again if another promotion decided to do something similar. That said, though, it’s not a viable way to grow a promotion long-term. There’s a reason most MMA promotions have abandoned the single-night tournament format. Just as MMA has evolved from a spectacle into a sport, so too have its promotions evolved to showcase their top fighters fresh from training camp, rather than trying to make stars out of survivors. Tournaments are fun on paper, but in 2014 they just don’t make sense.