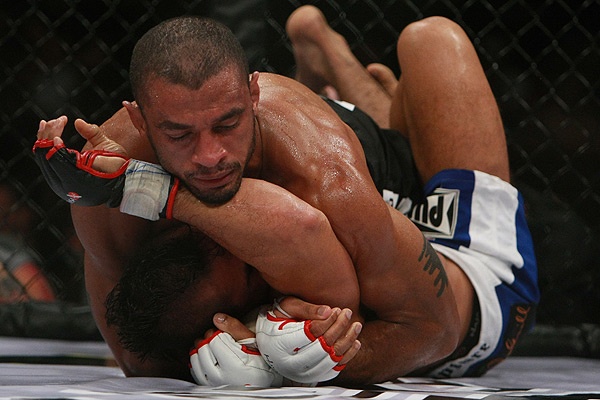 Folks that traveled from outside of Tulsa, Okla., to attend Friday’s BattleGrounds MMA one-night, eight-man welterweight tournament had the chance to enjoy the state’s heartland that sits between its few large city hubs. On the journey to Tulsa, those folks are likely to see dozens of hawks soaring in the endless blue sky up above. On the ground, the tall, spacious grasslands rhythmically blow in the breeze, changing from golden hues to a darker brown that represent the coming autumn. Over empty hills and small valley dips, the city line of Tulsa will eventually appear. The first things folks are likely to notice are the smoking spires and twisting pipes of the oil and natural gas industry that sit outside of downtown Tulsa.

The venue is odd right off the bat as the regional promotion’s choice to host its event. Just how big of a turnout could an upstart promotion honestly expect? The UFC, the largest recognizable brand in MMA, is able to pull off venues such as this. Bellator, arguably the No. 2 MMA organization doesn’t even try for the largest of arenas. You’re going to find them working at casinos and at smaller arenas, such as the 7,000-seat Santa Ana Star Center outside of Albuquerque, N.M. Given even Bellator’s much lower bar, how many people could a regional promotion really expect this event to draw? Why would the company want to grab the largest available space for itself on a Friday night?

It turned out like most anybody would expect: it was a bit ambitious of the promotion.

The time was after 5:30 p.m. in the evening, and media and VIP guests were showing up. The cage was still being constructed on the arena floor, and all the many parts working to put this machine together were humming along. Apparently BattleGrounds was behind schedule, though. There was confusion as to when the doors would be open to the public and when the event was to start. Those details weren’t exactly clear to those on the inside, let alone those on the outside. As one grizzled photographer for Sherdog foretold, “It’s going to be a long night.”

The cage was finally fully constructed a bit before the public began streaming into the arena around 8 p.m. local time. Several amateur and pro bouts were scheduled to take place before the four quarterfinal bouts of the welterweight tournament began. Each tournament fighter was to have at least a 30-minute rest and medical evaluation period before their next fight. This ran the event past midnight, an even later time for those tuning in on the East Coast.

After it was all said and done, the heavy police security were directing all in attendance to find their way to the exits. A long line formed behind commentator Chael Sonnen, who kindly stayed behind to take pictures with fans. There was no time left for a presser or interviews. Sonnen was ready to get back to his hotel for the night and call his wife. “She’s a lucky lady,” he joked with his trademark charm.

This was the BattleGrounds promotion’s fifth event, and the unique tournament aspect had drawn a good amount of media attention. However, it was obvious the promotion was ill-equipped to put on such a large-scale event. The company’s humble beginnings from starting out in Enid, Okla., meant this undertaking was quite the jump. It was a beautiful call to attention for the Oklahoma-based group in terms of publicity, but the ability to pull it off and stay afloat once it’s all said and done is yet to be seen. The revenue from the $20 pay-per-view price tag will be the best indicator of whether the event will provide a good return.

In terms of attendance at the arena, my quick Instagram from the ground floor had people talking. Unfortunately for BattleGrounds MMA, the common response was, “Yikes!” It appeared a good amount of the people seated in the arena were there to cheer on local fighters they knew directly, as opposed to being the run-of-the-mill fight fans who buy tickets to enjoy the show. Only the bottom few rows past the floor were filled, leaving most of the upper level seating empty. Obviously, the BOK Center was far too big of a venue to host this regional event.

Aside from the home-state heroes on the card, the tournament proved to be as fun as it was advertised to be.

Oklahoma native Trey Houston submitted journeyman Jesse Taylor in the first quarterfinal match-up. The upset eliminated the fighter who many considered to be one of the favorites to take the whole thing.

Roan Carneiro breezed his way to the finals with a submission win over his first opponent, Randall Wallace, and a beautiful knockout of Houston in the semifinals.

UFC vets Brock Larson and Cody McKenzie squared off in a quarterfinal match, and Larson submitted the obviously out of shape McKenzie. Larson’s next match came against Joe Ray, who had scored a solid TKO win over Luigi Fioravanti in the quarterfinals. Larson and Ray went the distance, with Larson grinding Ray out with top control.

Fighting a 15-minute war was the least desirable outcome for any of the fighters on their way to the finals. Unfortunately for Larson, his was the last semifinal before the finals. This gave Carneiro a good amount of rest leading into their match-up. The wear of Larson’s first two fights was evident heading into his match with Carneiro, who looked relatively unscathed.

Both men were tentative to push the action and open themselves to any kind of mistake. The fact that they had to win two other fights on the same night and that the $50,000 was within their reach was palpable. The most significant portion of the fight came when it hit the floor with Carneiro on top, pounding away on a turtled Larson. Larson barely made it through, with the fight close to being stopped. Larson’s exhaustion was evident, as was the damage he had endured. In the end, Carneiro earned the nod and looked particularly fresh and injury-free considering the work he put in for the night. Larson was more visibly tired and his entire face was swollen from the hard punches he received from Carneiro. Larson was obviously disappointed. Meanwhile, Carneiro was the successor in one of MMA’s most honored formats, the one-night tournament.

Carneiro was awarded $50,000 in cash—minus the $15,000 the Oklahoma Athletic Commission fined him for being late to his physical exams—and a shiny new belt for the tournament win. It should prove to be a good jolt to his career and a great addition to his resume.

But it was well past midnight, and fans were already making their way out of the arena rather than celebrating the win with Carneiro.

For BattleGrounds, the tournament proved to be a success in many ways. It harkened back the days of yore when men fought in grueling conditions and were more the legend for it. Fans who bought the pay-per-view were treated to the old adage that you never know what’s going to happen in MMA. They watched some of the favorite names bumped off in the quarterfinal matches. Reviews of the broadcast duo of Sonnen and Jim Ross were positive as well.

Where BattleGrounds was most successful was in adding plenty of recognizable names to the tournament, as well as a can’t-miss broadcast duo of Sonnen and former WWE commentator Ross. However, the promotion’s flaws in being able to produce such an event were evident.

The BOK Center was a terrible choice of venue. One can’t imagine that the few hundred in attendance would offer any sort of significant return. Perhaps the pay-per-view revenue will close that gap, though. The event turned plenty of heads, but it’s possible that the promotion could end up sinking itself by trying to produce something bigger than it can afford. One lucky winner walked away with a good chunk of change for his hard work, but there were a larger number of others that went away equally disappointed. You’ve got to give it to BattleGrounds for the promotion’s vision and the successes that it had on Friday, but you’ve also got to wonder if the positives outweigh the negatives.