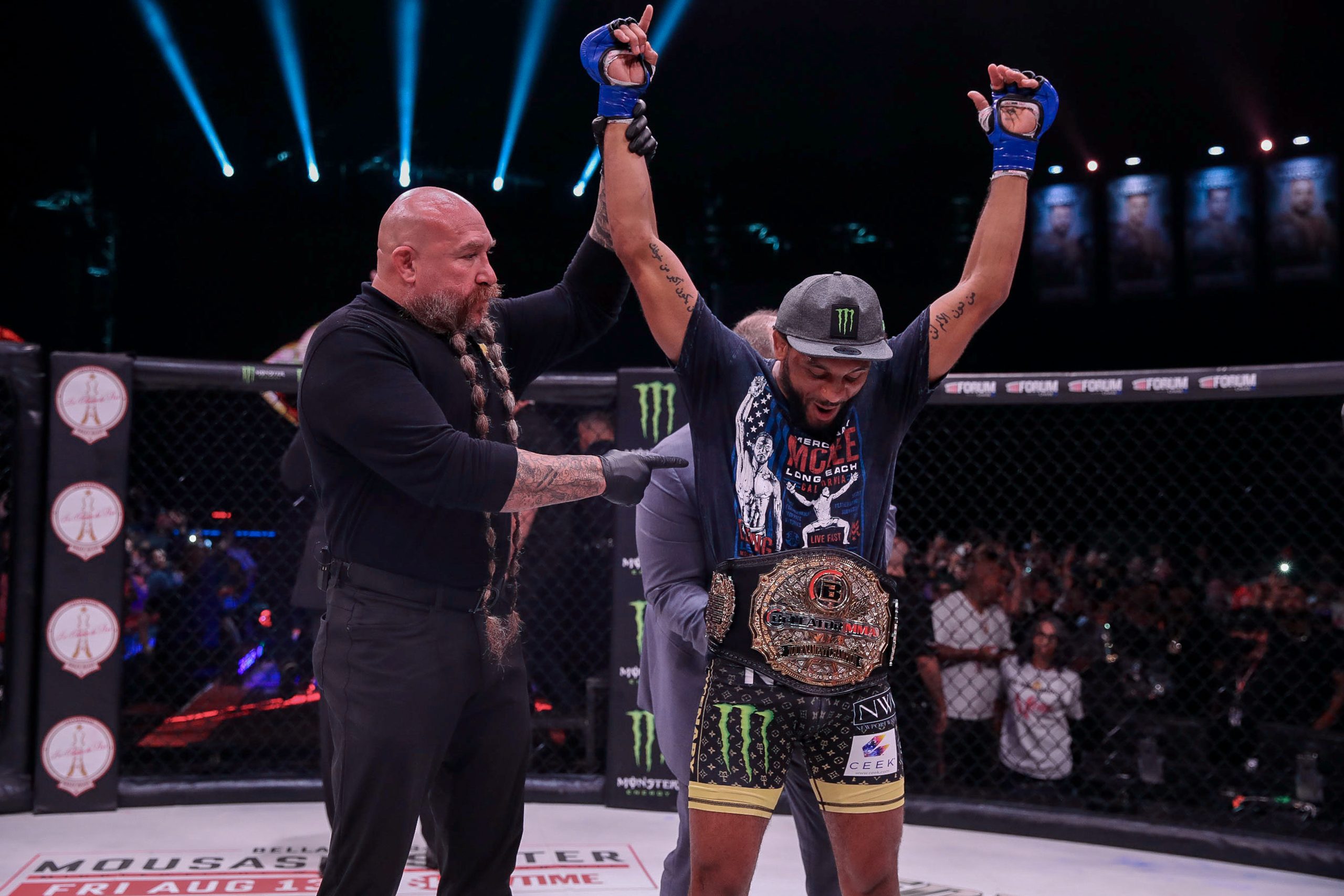 Bellator returns after a one-month layoff with their fourth event of 2022, when Bellator 277: McKee vs. Pitbull 2 takes place, live from the SAP Center in San Jose, Calif.

Things have been going uphill for Bellator ever since A.J. McKee Jr. beat Patricio “Pitbull” Freire to win the one-million-dollar featherweight grand prix in Jul. 2021. On Apr. 15, McKee looks to win the rematch and solidify his dominance over the most successful fighter in Bellator history.

Although McKee vs. Pitbull 2 will be the main focus, Bellator added various intriguing fights, including the light heavyweight championship in the co-main event. Vadim Nemkov goes for his third title defense against Corey Anderson.

Since leaving the UFC for Bellator, Anderson has dominated his way to a title shot. Everything has gone smoothly for ‘Overtime,’ but Nemkov has slowly become one of the best fighters on the entire roster.
Other fights to watch are Aaron Pico vs. Adli Edwards, Tim Johnson vs. Linton Vassell, Tyrell Fortune vs. Rakim Cleveland, and Kyle Crutchmer vs. Michael Lombardo.

The preliminary card airs live on Bellator’s YouTube channel starting at 7 p.m. ET, with the main card following on Showtime at 10 p.m. ET. Check out the full Bellator 277 preview and predictions below.

The main event is a rematch for the featherweight world championship; can former champion Patricio Pitbull reclaim his belt?

Nine months after their first fight, McKee and Pitbull meet for a rematch to offer the former champion a shot at redemption. Last time out, McKee choked Pitbull out in under two minutes. The result seemed clear who the better fighter was, but Pitbull’s illustrious Bellator career has earned him an immediate rematch.

No disrespect to Pitbull, but a lot needs to change for him to win the belt back. McKee put the pressure on Pitbull immediately, landed a massive head kick that dropped him, and then choked him out with a standing guillotine. We’re not talking about a sketchy decision here.

With that said, Pitbull is one of the best fighters on the roster and has a path to victory. The key will be keeping McKee on his backfoot. The featherweight champion is fast, powerful, and explosive. If Pitbull finds himself moving backward early, it could be another short night for McKee. AND STILLLLL.

Corey Anderson is undefeated since joining Bellator; does he put a capstone on his run by defeating Vadim Nemkov for the light heavyweight title?

When Anderson left the UFC, he had two goals in mind; become a world champion and make good money. According to Anderson, he got the money he wanted. The only thing left to do is win a world championship.
Standing in Anderson’s way is the Russian champion. Nemkov is 7-0 in Bellator, defending the title twice since taking it from Ryan Bader. The champion has the tools needed to continue his win streak, but can he stop Anderson’s wrestling?

The short answer is no. Anderson’s grappling is levels above Nemkov and should be able to dominate on the ground. Nemkov has solid takedown defense and striking, but Anderson is relentless with the grappling. There is a chance Anderson gets knocked out, but the American should get his hand raised.

Tim Johnson has lost two fights in a row; can he stop that skid from becoming a three-fight losing streak by defeating Linton Vassell?

Things have not been going well for Johnson recently. Although he still maintains that unorthodox heavyweight striking that has created success in the past, his declining athleticism has begun to cause struggles.

After fighting two top-tier opponents – Valentin Moldavsky and Fedor Emelianenko – Johnson takes on Vassell, who has looked phenomenal in his last three fights. Vassell’s issue is inactivity, but staying inactive and healthy could be the key at 38 years old.

Both fighters are not in their respective primes, but their recent success is the difference. Although Johnson has faced tougher competition, Vassell’s ability to pull out the win in close decisions should pay dividends in this fight. It may not be the most interesting bout on the card, but Vassell should squeak out a close decision win.

The sleeper matchup at Bellator 277 is Kyle Crutchmer vs. Michael Lombardo. Both fighters are on winning streaks, training out of big time gyms, and need another win to start climbing the rankings. With both fighters looking to stay signed to Bellator, this fight could showcase the future of the welterweight division.

After losing his first pro MMA fight, Crutchmer looks for his third win in a row. Training out of American Kickboxing Academy, the 28-year-old used to wrestle at Oklahoma State University before transitioning to MMA. On the contrary, Lombardo trains out of American Top Team and won his last four fights.

Both fighters tend to come out firing and rarely slow down. Don’t underestimate the potential of Crutchmer vs. Lombardo.