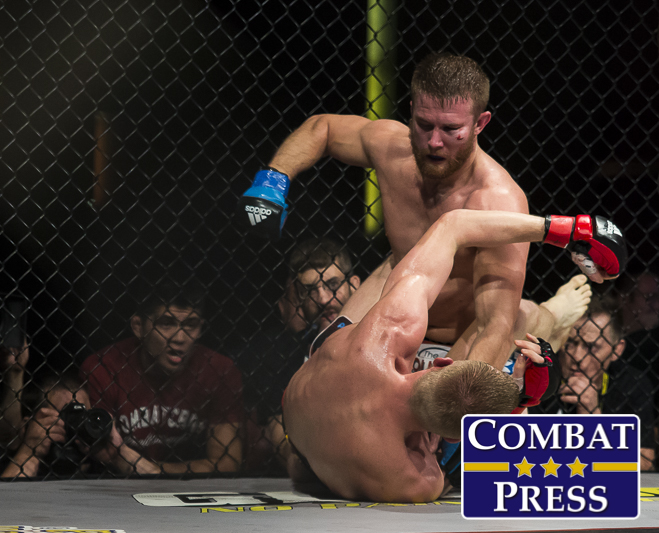 Let’s examine the featherweight division, a weight class that is loaded with good, young talent and is rapidly becoming one of the best, most entertaining divisions in the UFC.

One of the dark horses this year, Wisconsin’s Gilpin is a featherweight who should probably deserves more love than he gets from hardcore MMA fans. The 26-year-old Madison resident is a talented, motivated fighter who seemed to be close to a UFC contract this year, but was ultimately not selected to join the roster.

Gilpin is a strong, stocky fighter known for his ground game. He has strong wrestling skills that he mixes well with his submission grappling. Half of his wins have come by way of submission. He does have some knockout wins, but he doesn’t exactly have one-punch power. Since losing to current UFC roster member Dan Moret in 2016, Gilpin has rattled off seven wins in a row, mostly against notable talent. In 2018, he scored two of those victories. First, he choked out Adlan Mamaev. This earned Gilpin a shot on Dana White’s Tuesday Night Contender Series, where he choked out a very game JR Coughran with his signature D’arce choke.

Gilpin is obviously already on the UFC’s radar. He was the only victorious fighter from that particular DWTNCS event to not receive a contract offer from the UFC. It’s a real shame, seeing as his finish was just as good as some of the others on the card. UFC President Dana White and the matchmakers probably have Gilpin down as a guy to sign if they need a featherweight on short notice.

If a fighter doesn’t compete for a year, they usually don’t land a spot in this series. However, given his skills and overall resume, it’s difficult to exclude Grundy, who has now appeared on this list for two straight years. The 31-year-old Englishman is a talented featherweight with big-league MMA potential written all over him.

The Team Kaobon member has not lost since 2015. He has been highly impressive since his lone setback. Grundy has a fantastic submission arsenal, which has led to eight of his finishes in 11 victories. He uses an impressive array of submission techniques, from D’arce chokes to kimuras to arm-triangle chokes. His striking isn’t terrible, but he’s most successful on the mat.

Before the UFC can grab this prospect, he likely needs to break out of his inactive streak. Grundy had a fight set up in 2018, but it was scrapped. Here’s to hoping Grundy gets back on track and returns to the cage as soon as possible. He’d be a real asset to the UFC.

We mention frequently about how important it can be to win a top regional championship belt when it comes to getting the attention of top MMA promotions. That’s why Landwehr’s stock has skyrocketed. He is the M-1 Challenge featherweight champion. That’s why the 30-year-old Tennessee native has become a top 145-pound prospect.

Landwehr, who is riding a six-fight winning streak, has been smashing his way through the M-1 Challenge promotion. Three of his four M-1 bouts have ended by knockout. He is an aggressive striker who can end a fight quickly with his hands. His grappling has improved while putting in work at SSF Submission Academy. His two wins in 2018 came over the likes of Andrey Lezhnev and Khamzat Dalgiev.

M-1 has shown a willingness to let fighters sign with the UFC. The Russian promotion has even let champions go, so Landwehr to the UFC is definitely not a crazy thought. He’s the type of tough, scrappy fighter the UFC prefers, so it wouldn’t be a shock if the company sent him a contract in 2019.

A protege of UFC legend Pedro Rizzo, 24-year-old Brazilian Leonardo Limberger is a true blue-chipper coming out of the South American MMA mecca. He’s one of the best prospects to emerge from that large talent pool, which is a high accolade for the youngster.

A well-rounded fighter, Limberger trains in a vale-tudo setting. He can beat opponents on the feet or on the ground. He has good submission grappling and striking, both of which he uses to finish fights. He went 2-0 under the Shooto Brazil banner in 2018, scoring decision wins over Fabricio Martins and Dony Matos. Limberger hasn’t loss since 2013, a five-year streak that has been impressive, to say the least.

The UFC makes its way to Brazil several times per year, so Limberger should be on the short list to get signed, whether it’s for a scheduled bout or on late notice. He has a chance to go far inside the Octagon.

No stranger to this list, Valiev is definitely a talent that would fit in well with the UFC featherweight division. He has a strong camp behind him, he’s constantly improving, and he’s proven he can step in the cage with high-quality opposition.

The Russian is extremely well rounded. He has a background in Pankration to accompany a very strong ground game with powerful wrestling. That doesn’t mean Valiev is not a striker. He has very good boxing skills, as well as some underrated kickboxing techniques that he pulls out from time to time. Valiev was involved in the Professional Fighters League $1 million tournament, where things started off well for him with victories over Max Coga and Bekbulat Magomedov. He scored a playoff spot, but was unfortunately injured before he could compete. Valiev, had he been healthy, could have easily won this tournament.

The PFL tournament win would have been the easy route for Valiev, but he’ll have to probably continue to work to get the UFC to ink him. It should be no problem, though. With his skill set, management and the gym behind him, Valiev is almost a guarantee to eventually join the company.