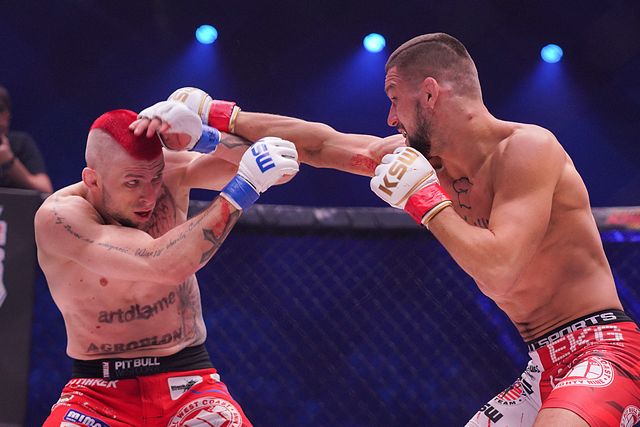 On Saturday, Jun. 25, the UFC returns to the UFC Apex in Las Vegas to showcase UFC Fight Night: Tsarukyan vs. Gamrot. The future of the lightweight division will be on display this weekend as two top young fighters look to make the move from prospect to contender as Arman Tsarukyan meets Mateusz Gamrot in the main event.

Tsarukyan drew the tough task of facing Islam Makhachev in his UFC debut, coming up short, but impressing fans and matchmakers alike by giving the Dagestani standout a tough time throughout the bout. His opponent, Gamrot, also dropped his UFC debut, but, like Tsarukyan, he has thrived since then, rattling off three straight stoppage victories. The future is bright for both of these fighters, but only one man will be able to keep his winning streak in place after they showdown.

In the co-main event, another rising star takes the stage as Shavkat Rakhmonov squares off against perennial contender Neil Magny. Rakhmonov has looked unstoppable through three UFC bouts, notching two submission wins and a knockout. Magny has recently found his rhythm again, winning back-to-back fights, and five of his last six overall. This fight will show whether Rakhmonov is ready to take the leap into facing the top contenders, or whether the 34-year-old Magny has one last push towards a title shot before his career begins to come to a close.

The event airs live in its entirety on ESPN+ starting at 7 p.m. ET. The preliminary card also airs on ESPN2 starting at 7 p.m. ET, with the main card following on ESPN at 10 p.m. ET. Combat Press writers Andrew Sumian and Matt Petela preview the action in this week’s edition of Toe-to-Toe.

Sumian: This 155-pound clash is a perfect example of prime matchmaking between rising talents in the always entertaining lightweight division. Both fighters are surging, going into the back half of 2022, and the winner will likely find themselves facing a top-seven or top-eight opponent in their next outing.

Prior to his last two fights, Arman Tsarukyan looked like a dominant, yet boring, decision fighter. That all changed when he viciously finished Christos Giagos and Joel Alvarez in his last two UFC appearances. The young Armenian-Russian native has undoubtedly established himself as a powerful wrecking ball, capable of putting on a beating when securing a dominant ground position. His striking is improving with every fight, and he will only continue to get better as he gains more experience in the UFC’s most stacked division. Tsarukayn’s potential was on full display when he made his UFC debut and turned in a “Fight of the Night” performance against the heavily favored Islam Makhachev. If the eleventh-ranked Tsarukyan can make it six in a row on Saturday, expect his stock to significantly rise.

Taking out Scott Holtzman, Jeremy Stephens, and Carlos Diego Ferreira in your second, third, and fourth UFC appearances, respectively, is no easy task. That is precisely what Mateusz Gamrot has accomplished since arriving to the UFC in 2020. The former KSW champion has undoubtedly been one of the best signings in recent memory and has flourished as a UFC lightweight. Despite being known for prolific grappling, Gamrot is also a talented striker and has turned in seven victories by way of knockout. The rising Polish star is on the cusp of contendership and will only get better with every Octagon appearance.

This fight is going to be wild from start to finish. Both competitors are very talented grapplers, and it may come down to who is able to find more success in the striking department. The pair combine for a whopping 38-3 record, and the winner will find himself in the conversation as prospective title contender sooner than later. This fight is going to end in a split decision, with viewers being mixed on who the clear winner is. After a five-round war that showcases both men’s skills, Gamrot will get his hand raised. The decision will be met with controversy, and an immediate rematch will certainly be on the table.

Petela: When Arman Tsarukyan lost his UFC debut to Islam Makhachev, I went on record saying that he would be a UFC champion one day. This fight with Mateusz Gamrot will be his toughest test since that debut, but it will be one that Tsarukyan passes with flying colors. As the level of competition has risen steadily for Tsarukyan, he has shown more and more wrinkles to his game. He has also started finishing his opponents, as my colleague noted. I disagree that prior to those last two performances he was a boring decision machine. His wins over Olivier Aubin-Mercier, Davi Ramos, and Matt Frevola were anything but boring. Tsarukyan showed no hesitation diving into the dangerous guard of Ramos, and not only survived, but he landed a fair amount of ground-and-pound while controlling the third-degree Brazilian jiu-jitsu black belt. He also thoroughly outgrappled Aubin-Mercier and Frevola, two very talented fighters with wrestling- and grappling-heavy styles.

The only knock on Tsarukyan is that he missed weight in his fight against Frevola. He successfully made the lightweight limit for his last two bouts, and, as long as he has that under control moving forward, I stand by my claim that Tsarukyan will wear a UFC belt in the not so distant future. This will be a great showcase for him against another very tough surging opponent. The ceiling is also very high for Gamrot, a supremely talented fighter who is a heck of a grappler in his own right. There will be a number of entertaining scrambles, but in nearly all of them, it will be Tsarukyan who comes out in an advantageous position. Tsarukyan will make it six straight wins, but he will likely do so by decision against a durable fighter like Gamrot, who has never been finished as a professional.

Shavkat Rakhmonov is undefeated and has finished all three of his UFC opponents; does Neil Magny prove to be a bridge too far for the surging Kazakh?

Petela: No, but it is the perfect test for Rakhmonov to show off how talented he is and put the rest of the welterweight division on notice. The term “gatekeeper” is thrown around a lot, and usually as a semi-pejorative term, but Neil Magny is a gatekeeper in the truest and most respectable sense of the term. Nobody beats Magny if they aren’t elite and on the way towards becoming a title challenger.

The one thing that Magny might do that other opponents of Rakhmonov haven’t done is go the distance with the rising star. All 15 opponents have been finished inside the distance, but it is incredibly difficult to stop Magny. The last person to beat Magny inside the distance was Santiago Ponzinibbio, when Ponzinibbio was on a six-fight hot streak. Expect a dominant performance from Rakhmonov, and a lopsided decision, but for the first time in his professional career, he will see the judges’ scorecards.

Sumian: I agree with my colleague. This is a great opportunity for Rakhmonov to showcase his ability to compete with the elite welterweights of the world. Magny will not make it easy and provide a formidable challenge until he is stopped in the second round. Rakhmonov is one of the best welterweights in the world, and he will make it abundantly clear come Saturday.

Sumian: Alan Baudot is undoubtedly on his way out if he cannot pick up his first UFC win after four Octagon appearances. He will be facing Josh Parisian who is 1-2 in his UFC campaign. Baudot has struggled to showcase his skills as a striker, despite coming into the UFC with an 8-1 record. The French native will need a memorable victory if he hopes to keep his roster spot.

Petela: JP Buys. He is 0-2 since joining the promotion on the same night as his ex-wife Cheyanne Vlismas. We have seen this before with Montana and Mark De La Rosa, where a successful woman has perhaps brought her spouse along to the big show slightly before he was ready. That was the case with Buys and now that the surging Vlismas is no longer both figuratively and literally in his corner, a loss will likely spell the end for him inside the UFC.

Petela: Brian Kelleher vs. Mario Bautista. This will be the highest paced fight of the night, and both men will have stretches of success. Kelleher is just a shade below the elite at bantamweight, but anytime he is in the cage with a fighter of a similar caliber, he delivers outstanding fights. This will be no different as he and Bautista go back and forth for fifteen minutes.

Sumian: Thiago Moises and Christos GIagos should be a fun one for as long as it lasts. Expect a wild first round, and then a finish by Moises at some point in Round 2. This fight certainly has fight of the night potential written all over it.

Sumian: Thiago Moises will get back on track with a finish over Christo Giagos. Moises is on a two-fight skid, buthe will return to his winning ways come Saturday with a second-round finish for the Brazilian.

Petela: Rodolfo Vieira. He bounced back in his last fight, submitting Dustin Stoltzfus in their Jul. 2021 bout. That came on the heels of his first professional loss, a shocking submission loss to Anthony Hernandez. The multi-time world champion in jiu-jitsu was exhausted and forced to tap in the second round, stunning fans and commentators alike. Vieira will need to get this fight to the canvas against Curtis, who holds a significant striking advantage and has 16 knockout victories under his belt. Once Vieira does get the fight to the mat, he will work quickly to lock up a choke and get the win, earning himself an extra fifty-thousand dollars in the process.

Sumian: Welcome to the new age. This is a perfect fight night from top to bottom. The final two fights of the evening feature three of the most talented young stars in the UFC. Fans will be treated to some high-level combat as these up and coming contenders battle to continuously improve their position in their respective dvisions.