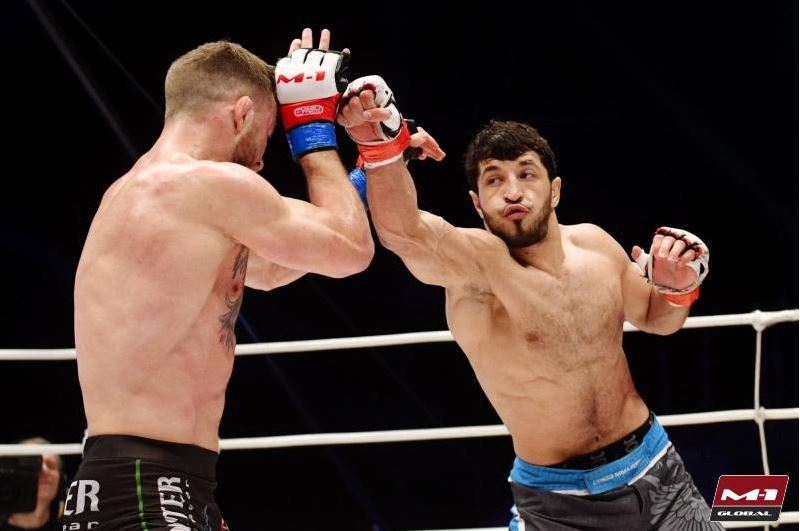 Five Light Heavyweight Prospects the UFC Should Sign in 2018

Let’s look at the light heavyweight division. The weight class has added new talent at the UFC level, but it needs even more talent on the roster to deepen the division.

There may not have been a fighter who went from nothing to something more quickly in one year than Russian Agnaev did in 2017. He was a 2-0 fighter that did not have a keynote win when he entered the year, but he scored victories over two big names to land as the top light heavyweight prospect in the world.

Agnaev is member of the Alexander Nevsky gym, which has produced some of the top fighters in the world. He has natural gifts as well. He’s a 6-foot-5 light heavyweight who is large and long for the 205-pound weight class. This lends well to his style as a striker with outstanding boxing skills and great stopping power.

Agnaev started 2017 with a first-round upset over Max Nunes, a respectable journeyman with a solid resume. The win earned him a spot in the Absolute Championship Berkut light heavyweight championship bout, where Agnaev punched his way through a second-round stoppage of UFC veteran Thiago Silva. The win has set him up with name recognition and an impressive trophy case.

Agnaev already has a bout scheduled on Jan. 20. He will defend his ACB belt opposite another intriguing prospect, Dovletdzhan Yagshimurodov. Should Agnaev secure a victory, especially by stoppage, there’s no reason why the UFC shouldn’t come knocking with a nice contract offer.

The little island of Ireland sometimes brings a title of overrated to some of their fighters, as some fans and pundits associate Irish fighters solely with Conor McGregor. However, there is no overrating Moore, who has become one of the most impressive light heavyweight prospects outside of the UFC.

The Fight Academy Ireland product is pretty well rounded, though it’s worth noting that most of his wins come by way of submission. He is constantly improving, especially since his 2015 loss to current UFC roster member Paul Craig. He’s certainly a guy whose style and skill would benefit him if the UFC were to sign him.

While he was not the most busy in 2017, Moore’s lone fight did bring him Cage Warriors gold. In fighting for the vacant light heavyweight strap, Moore was able to outpoint The Ultimate Fighter veteran Josh Clark to score the biggest win of his career. He also owns a victory over UFC heavyweight Cyril Asker.

The UFC has a penchant for signing Irish fighters, so there’s no doubt that the promotion has to be considering acquiring the skilled Irishman’s services. Not only does Moore check the box on nationality, but he could compete with the high level of talent in the UFC’s light heavyweight division.

There may not been a more busy boy in the light heavyweight division in 2017 than American prospect Noblitt. He competed five times and in those five fights, score victories in all of them, launching him into top-prospect status.

A member of the increasingly impressive Glory MMA and Fitness, Noblitt is like many of the fighters at that gym — he’s well rounded and tough as nails. Noblitt is best suited to fight on the mat, where he mauls opponents and taps them out. His striking is not bad either.

Four of his five wins in 2017 were finishes. The biggest victory of his career came in his most recent bout, where Noblitt scored a submission in the first round over TUF veteran Antonio Paulo Branjao in a Legacy Fighting Alliance main event. The win has certainly added great value to Noblitt’s name.

The 28-year-old has set himself up to either compete for an LFA title or to get on the UFC roster in 2018. However, he was set to compete on Dana White’s Tuesday Night Contender Series before his past caught up to him — Noblitt is a registered sex offender — and he was nixed from the show. Noblitt’s skills and continued improvement could make him a contender in the future, but he might have a difficult time overcoming his past indiscretions.

Shtyrkov makes his second appearance in this prospect’s series in two years. This time, though, he appears at light heavyweight. The former heavyweight continues to be a prospect with UFC written all over him. He’s got everything he needs to be a UFC contender right now.

The moniker “Ural Hulk” is a fitting one for Shtyrkov, who is a massive light heavyweight that is thickly muscled and overwhelmingly powerful. He has a style that lends well to striking. He moves very well for a man his size and is immensely powerful. Most of his wins have come via knockout — you don’t want to stand with this man.

After ending 2016 with the biggest win of his career over UFC veteran Antonio “Bigfoot” Silva, Shtyrkov did not slow down in 2017. In fact, he won four bouts, scoring decisions over UFC vet Rodney Wallace and former Bellator champion Christian M’Pumbu, while knocking out UFC vet Phil de Fries and Bellator veteran Satoshi Ishii. All of these wins are incredibly impressive and prove that Shtyrkov should be fighting at a higher level.

A guy with the resume, skill set and killer instinct of Shtyrkov should be roaming the UFC’s light heavyweight division. There is no doubt he could be a contender from the get-go, so the UFC needs to pony up and get this guy inked.

The third Russian on this light heavyweight list, Yusupov is just 25 years old and already holds the accolade of M-1 Challenge light heavyweight champion. If he’s already accomplished this feat in his short, nine-fight career, just imagine how good this guy will be when he hits his prime.

Yusupov is a striker, using the styles of wushu and sanda as his foundations for fighting. He does have submission wins, but he’s best when fighting on the feet. He does have more knockout wins than tapouts. Not only is he technically sound, but he has good power as well.

After winning the M-1 title in 2016 over Viktor Nemkov, Yusupov defended the title successfully in two bouts in 2017. First, he forced former M-1 champ Stephan Puetz to surrender after two and a half rounds of savagery. The young Gorets camp rep then scored a first-round finish over Stjepan Bekavac outside of M-1.

To be this good at such a young age implies that Yusupov is undoubtedly going to be a contender at the highest level. If the UFC can snatch him up at this point in his career, the company can give him more experience and let him prove he belongs with some of the best in the world.