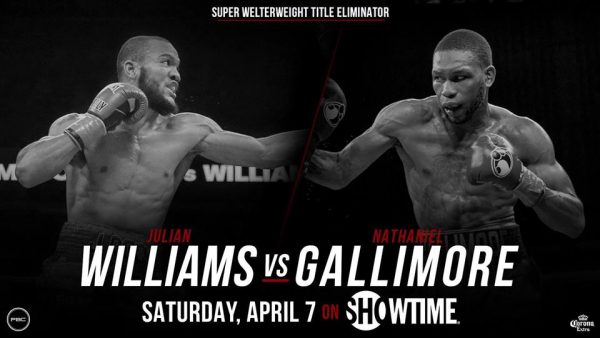 Junior middleweights Julian Williams and Nathaniel Gallimore will square off against each other on April 7. The bout is the third official fight to be announced by Showtime for that date. Jarrett Hurd and Erisandy Lara have been previously announced as the main event, with Caleb Truax and James DeGale serving as the co-headliners.

In a press release earlier today, Showtime revealed that Williams and Gillimore will be a 12-round title eliminator, with the winner in position to become the mandatory challenger for the IBF title currently held by the aforementioned Hurd.

Williams is on the hunt to gain his second title shot. His first crack at the belt resulted in his lone professional loss to Jermall Charlo in 2016. Since the defeat, Williams has rattled off consecutive wins over Joshua Conley and, most recently, Ishe Smith.

Gallimore is coming off a 2017 in which he knocked out all four of his opponents. Gallimore now works with renowned trainer Buddy McGirt in California. He doesn’t seem fazed by the accomplishments Williams brings to the ring.

“This is going to be my coming out year,” Gallimore said, via the press release. “This is a huge opportunity to present my skills and my abilities to the world. There’s no mistaking why I’m here, and I’ll make a statement starting with ‘J-Pebbles’ Williams. I call him ‘J-Pebbles’ because he’s not a ‘J-Rock.’ He’s an average fighter. There’s nothing special about him. The best way he can prepare is to do chin pushups, because I’m going to test his chin and that’s the only thing that can protect him. I’m going to dismantle him piece-by-piece, round-by-round, and when that time comes to seek and destroy, I’m going to take him out. I’m the one they should be worried about.”

The card will take place at the Hard Rock Hotel & Casino in Las Vegas, Nevada.