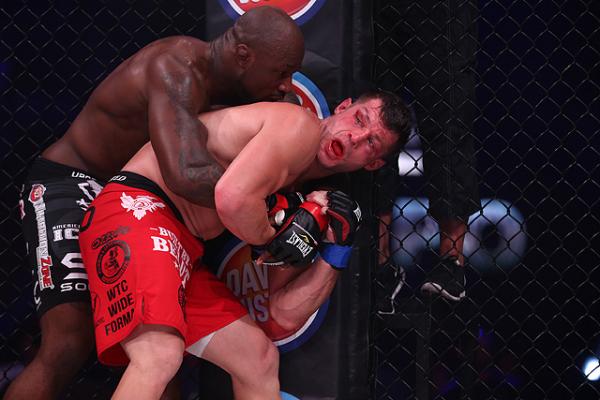 The weeks around the Christmas and New Year’s holidays are often big ones for the big promotions, but they tend to be slow for the regional scene. That, however, leaves the door open for even more obscure promotions to make the cut for this feature. Case in point, Revolution Cage Combat. Nearly a year and a half after its 13th event, the company is back for its 14th show. The top of the card features a number of veterans, including light heavyweight title hopefuls Joe Vedepo and Daniel Vizcaya.

The 34-year-old Vedepo made his professional debut in a losing effort in 2005, but he won seven of his next eight. His only loss in this stretch came to Mario Miranda, who would eventually land in the UFC. “The Doctor” landed a UFC contract as a result of this run, but he was knocked out in the first round of his Octagon debut against Alessio Sakara and then suffered a first-round submission loss to Rob Kimmons in his second UFC outing. He was jettisoned by the promotion, but he rebounded on the regional scene and went 5-2 over his next seven fights. This led to an extended stint for Vedepo in Bellator, where he amassed a 4-3 mark while suffering losses to Louis Taylor, Kendall Grove and Muhammed “King Mo” Lawal. He also suffered a loss to Eddie Larrea under the Triple A MMA banner, but avenged the loss in his most recent outing at RCC 13. Vedepo, whose background is in wrestling, lost his Bellator contract in 2014 after he was accused of assaulting a police officer in Iowa.

The 32-year-old Vizcaya has a similar up-and-down history as a fighter. He debuted in 2010 and won his first three fights, including two outings under the M-1 banner. He closed out his 2010 campaign with back-to-back losses to Byron Byrd and Viktor Nemkov. “The Bulldog” returned to the American regional scene in 2011 and scored three straight stoppage victories. Bellator picked him up for a fight in 2012, but he only managed a split-decision victory over Jack Hermansson. Vizcaya’s next stop was The Ultimate Fighter 19 reality show, where he lasted just 75 seconds against Matt Van Buren. He’s only fought four times since his 2013 appearance on TUF, and he’s managed just a 2-2 record in that span.

Vedepo typically fights as a middleweight, but he’s step up to 205 pounds for this showdown with Vizcaya. Despite the difference in preferred weight classes, these two men have similar dimensions. They both check in at 6-foot tall and their reaches are only off by an inch.

While Vizcaya hasn’t fought often in the last few years, he was able to edge fellow TUF alum Chuck O’Neil in the co-headliner of CES MMA 31 in 2015. The Prime Muay Thai fighter has the ability to submit opponents, but he’s also been submitted on several occasions.

Meanwhile, Vedepo has struggled against the better opponents he has faced. HIs advantage in this fight could end up being his active schedule. Vizcaya hasn’t been as focused on MMA, and now he’s fighting a guy who had a rather decent run under the Bellator banner. Vedepo is a finisher — he has seven knockouts and eight submissions to his credit — and he tends to only lose by knockout. Vizcaya is a better grappler than he is a striker, so Vedepo might be in the clear in this one. Expect Vedepo to rock Vizcaya and then finish the fight with a submission.

Next, we head to Russia. The usual suspects — M-1, Absolute Championship Berkut, Fight Nights Global — have the week off, but the Golden Team Championship promotion is back for its second show. The marquee fight pairs middleweight prospect Magomed Ismailov and veteran fighter Dyego Roberto.

Ismailov, 31, is a member of Golden Team. In what’s listed as an amateur bout on more than one fighter database, the Russian handed the otherwise undefeated reigning M-1 light heavyweight champion Rashid Yusupov a decision loss. The combat sambo specialist’s pro career isn’t quite as impressive, but it’s not too shabby. His losses came against Lars Arendt, Anatoly Tokov and Xavier Foupa-Pokam, but he also holds a victory over Vladimir Katyhin. He has five knockouts and four submission victories.

Roberto is a member of the Chute Boxe team. The 30-year-old has had a difficult time finding consistency in his career, which began in 2008. After back-to-back submission losses, the Brazilian picked up wins in eight of his next nine contests. His only loss in this stretch came to Elizeu Zaleski, who is 4-1 in his current UFC run. He hit another rough patch in late 2011 and lost four of his next five fights. Roberto has not managed more than three wins in a row since then. While many of his defeats came against at least mildly successful opponents, he did drop fights to a 2-5 fighter and a 7-14 opponent. Oddly, though, he also submitted Tim Ruberg in a welterweight outing in 2014. Roberto has only gone the distance in one of his victories.

Regardless of how this fight goes, the sure bet is that Roberto will go for the finish. The Brazilian isn’t always successful, and he has some really bad losses on his resume, but he can occasionally pull out a stunner. This will be his first fight outside of Brazil, though, and that could hurt his chances for a victory.

Ismailov has been a more consistent fighter who can bring a quick end to his opponent’s night. While his loss to Foupa-Pokam is disappointing, it did come in Foupa-Pokam’s native France via split decision. Outside of this one blemish, Ismailov has defeated a reigning M-1 champ and lost to a fighter who has gone on to post a 25-3 mark as a pro. His other loss came early in his pro career.

Roberto’s always capable of the finish, but his history of inconsistency makes him the underdog in this affair. Given the Brazilian’s tendency to look for the finish, this should be a very entertaining fight. However, Ismailov appears to be the more skilled fighter. The Russian should score the knockout finish.

For the last of our three featured fights, we touch down in Brazil, where the Mr. Cage MMA Championship organization is set to hold its 32nd event. The lineup isn’t too deep, but it does feature an intriguing scrap for the women’s flyweight title between champion Estefani Almeida and challenger Deize de Lima.

The 29-year-old Almeida had a very active first year in the sport after debuting in August 2015. She fought five times in the span of exactly one year, and she won four of those fights. Almeida’s only loss in this stretch came to Ketlen Vieira, who is now undefeated through three UFC appearances. Vieira claimed a decision win over Almeida, who rebounded to score two stoppage victories and claim the Mr. Cage women’s flyweight belt. She’s only fought twice more since her championship win, but it hasn’t been for lack of trying. Almeida has had five different fights scheduled between late September 2016 and late September 2017, but four of the original match-ups fell through. Only one of those bookings ended up with a replacement opponent to fight Almeida, and that fight came at the bantamweight level, where Almeida needed just 81 seconds to knock out Cristiane Lima. Almeida’s most recent appearance came at Mr. Cage 30, where she scored a first-round knockout of Alessandra Tainara.

De Lima had a much less spectacular start to her own pro career. The “Gorilla” stumbled in her first three fights, suffering a submission defeat (against veteran Carina Damm), a decision loss and a knockout. She recovered and went 6-0-1 over her next seven contests. The draw came against Samara Santos. De Lima suffered another setback in July when she dropped to strawweight to fight Viviane Araujo. Araujo handed the 29-year-old a submission loss. The Agnaldo Salles MMA export has managed three knockouts and one submission victory of her own.

Almeida’s recent struggles to remain active have hampered what is otherwise a very successful career. The champ’s only loss came to a fighter who has stormed into the UFC and topped the likes of Ashlee Evans-Smith and Sara McMann. Almeida even went the distance with that fighter, too. There’s really no shame in that loss. De Lima, on the other hand, struggled out of the gates for three losses and also lost in her most recent outing.

De Lima’s not a complete pushover, but she’s not in the same league as Almeida. The champ has overwhelmed three opponents via strikes and submitted one other foe. She should be able to stop de Lima with strikes as well.