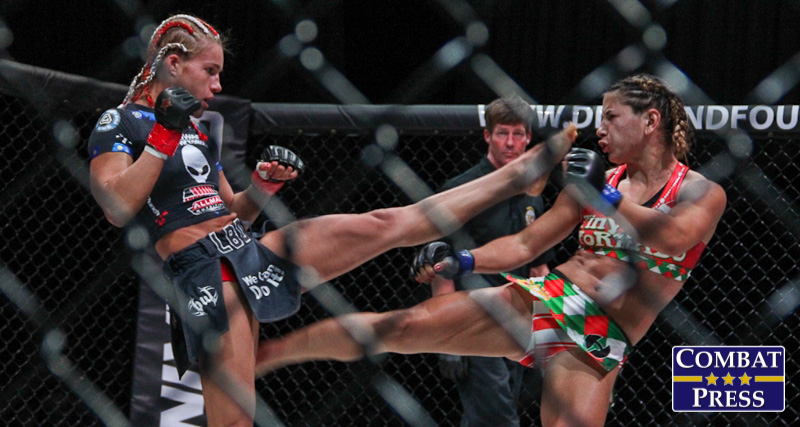 Keep an Eye on the UFC Strawweights in 2018

Felice Herrig, the UFC strawweight who experienced a career renaissance this year with three wins in 2017 and now has four consecutive victories overall, said she isn’t as keen to keep calling out other fighters if it doesn’t result in her facing some of the top women in her division.

You know what? She’s right.

Before Ronda Rousey and Paige VanZant were the blonde-haired women who made a name for themselves in MMA in part through their good looks, Herrig was a pioneer in marketing herself inside the cage and out. After a year-plus hiatus following a loss to VanZant in 2015, Herrig has reeled off four straight wins and looks like a brand-new fighter, even though she’s been competing professionally since 2009.

Herrig should have the opportunity to make a big move in the new year. The UFC’s strawweight division has never looked more wide open, thanks to the shocking upset of Joanna Jędrzejczyk at the hands of Rose Namajunas at UFC 217 in November. Namajunas ended one of the more dominant title reigns in recent memory. Now, it seems possible that anyone can rise to the top of the UFC women’s strawweight mountain.

Even though the first “big” fight at strawweight in 2018 will likely be a rematch between Namajunas and Jędrzejczyk for the title, there are a couple of other fights coming up that could help shape the strawweight division in new ways as the calendar turns to a new year.

The first one comes at UFC 219 on Saturday, Dec. 30, when Cynthia Calvillo faces Carla Esparza. Calvillo has been on an impressive run of her own, winning her first three UFC fights, including two by submission, and maintaining an undefeated overall record. Esparza was the very first UFC strawweight champion, and she is 2-1 since losing the title to Jędrzejczyk. If Calvillo gets past Esparza, she will have matched Herrig’s winning streak and can be one of the new faces to stake her claim in a crowded division. If Esparza wins, then the former champ could call for another title shot.

The other fight on the horizon is the rumored match-up in February between former strawweight title challengers Jessica Andrade and Karolina Kowalkiewicz. Andrade defeated two-time title contender Claudia Gadelha in a “Fight of the Year” candidate in September, and Kowalkiewicz was one of the very few fighters to have any success against Jędrzejczyk prior to the former champion’s loss to Namajunas. Both Andrade and Kowalkiewicz are skilled strikers who finally have the chance to bust through the blockade that Jędrzejczyk created during her dominant title reign.

Of course, all of these grand plans could be for naught if Jędrzejczyk wins a rematch with Namajunas and regains the strawweight title. This outcome is entirely possible. Jędrzejczyk was rather dismissive of Namajunas before their meeting at UFC 217, so she probably didn’t take her challenger as seriously as she should have. This likely sparked Namajunas to her huge upset, but the fight might play out differently the second time around.

The other factor to consider is the emergence of the UFC’s women’s flyweight division after the most recent season of The Ultimate Fighter. The relatively unheralded Nicco Montaño went on a Cinderella run during the show and won the inaugural UFC flyweight title convincingly over longtime veteran Roxanne Modafferi. It’s possible Montaño’s future title defenses could come against Jędrzejczyk, who has expressed an interest in fighting at 125 pounds, or former bantamweight title contender Valentina Shevchenko, who will fight at flyweight early next year.

Jędrzejczyk should be lauded for successfully defending the strawweight title five times. If the Polish fighter were to regain the belt in a rematch with Namajunas, she definitely still has a claim to go down as the greatest women’s mixed martial artist of all time. But if Namajunas successfully defends her title, then a whole new world of opportunities will open up in one of the UFC’s deepest divisions. The aforementioned fights then become must-see TV.

A fighter like Herrig, who currently sits in the top 10 in the UFC’s strawweight rankings, should be a part of that new world. A fight between Herrig and Tecia Torres, who defeated Michelle Waterson at UFC 218 earlier this month and seems poised for a title run of her own, would be a very competitive bout between two highly skilled veterans of women’s MMA. Perhaps the resurgent Herrig could even flip the tables on Torres, who defeated Herrig via decision at Invicta FC 7 in 2013.

There is much to look forward to in MMA as we wave goodbye to 2017 and get ready to welcome in 2018. The UFC’s strawweight division, in particular, is one to keep a close eye on in the year to come.