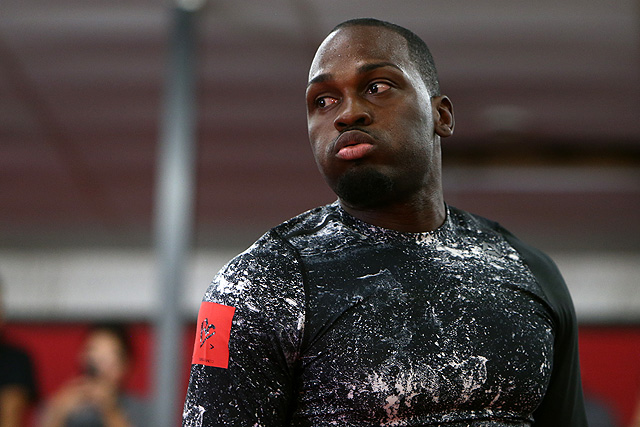 Don’t Leave It in the Hands of the Judges? Enough is Enough

Evolution is a part of our daily lives. No, I am not talking science here, or politics, but more so the lives that we live each day. It’s how we grow and succeed with the tasks at hand and any other curveball that slides its way in as well.

Sports in general have seemingly evolved along with the times. The NFL has made equipment upgrades and focuses on the safety of its players. The NHL doesn’t let two players throw down until one player is left standing. These are sports that have been around for decades and have evolved with the times, as they should have. Insert MMA and the landscape of this conversation becomes much more complicated.

MMA was introduced to many on a November day in 1993. It was a collection of the supposed best of the best in each respective discipline vying to see who would reign supreme. Back then, the only thing “mixed” about the martial arts were the varying competitors inside the cage at the same time.

Since that night, almost 25 years ago, so much has changed for the betterment of the sport. It is now clear that you cannot throw your opponent outside of the cage (looking at you, Tank Abbott). Fighters can no longer bite or strike to the groin during a bout. The 12-6 elbow is still illegal, but that’s for another discussion altogether. The problem the sport is currently running into isn’t if Conor McGregor is going to have a boxing match with Floyd Mayweather or if he’s actually going to defend his belt, nor is it anything to do with Ronda Rousey and the state of women’s MMA. The issue at hand is simple: Judging

How many times have you, the fan, media or fighter, heard UFC President Dana White say, “Don’t leave it in the hands of the judges.” Stop right there. It’s a lot, isn’t it? The statement itself is so flawed that it just begs the question of why there are judges if they are unable to determine a clear winner. Split decisions can go either way, and sometimes there are fights that are just simply too close to call, but last weekend at UFC 208, two fights ended in such a manner that they are going to be dragged through the appeals process in order to change the outcome.

Holly Holm is arguing that the shots Germaine de Randamie landed after the bell should have resulted in a point deduction. Meanwhile, many MMA outlets have said that Derek Brunson was the clear victor in his bout against Anderson Silva.

When this happens, the fighter is told, “You shouldn’t have let it go to the judges.”

While I am not here to argue the validity of a solid game plan or that, a good portion of the time, judges make the right call, it has to change everything a fighter thinks about during their bout. What if their opponent spends the entire fight running and countering, a la Lyoto Machida in his first fight with Mauricio “Shogun” Rua and is awarded the victory anyway? Does that fault fall on the fighter opposite the victor, or should a huge change be made that has been talked about for years? The solution is simple: Hire former fighters as judges.

Watch a fight with anyone who even has a slight interest in the sport. Instantly, everyone in the room becomes a judge, whether you have been watching the sport for 10 years or 10 minutes. It’s one thing to see the fight from the outside, but fighters could bring a whole new depth of judging to the MMA world. They would be aware that a fighter fighting off their back can put themselves in the dominant position. The fighters would award points accordingly and would better understand exactly what is going on inside the Octagon.

This line of thinking would also create a huge job market for retired or injured fighters who were looking to receive a somewhat steady income. It would keep these fighters close to the sport that they love. It’s a way to secure the future of this sport and move it in the right direction. Even having fighters on commentary, such as Brian Stann, Frank Mir, Kenny Florian and the great Bas Rutten, provides an inside look on the complex inner workings of MMA.

Until you have thrown a game-winning touchdown pass, hit a grand slam, sunk a three from behind the line to win the game or scored the Stanley Cup winning goal in game seven, it’s impossible to fully understand the emotions that come tied to such an accomplishment. With fighters as judges, bouts would be judged fairly and accurately, because these men and women have been inside that cage. They understand what it’s like and how sometimes a finish just isn’t possible. For a fighter to have to become reckless and undisciplined in order to take the fight out of the hands of the judges is just putting this sport back years, if not decades, in a world that thrives on evolution.