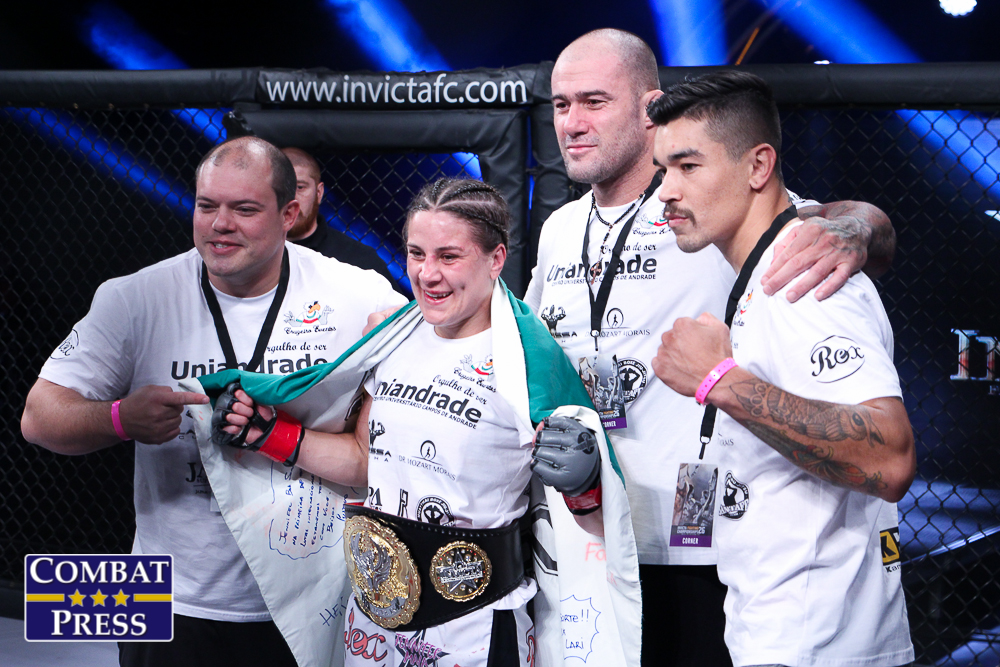 Editor’s Note: With the new calendar year, additional staff members have been added to our rankings panel. As such, some minor changes may have occurred to the rankings that are not tied directly to action in the cage during the previous month.
Featherweight Division (61.9-66.3 kilograms)

Dropped from the rankings: Latoya Walker (6)

Some of the best featherweights in the world went at it to end the year. Top-ranked 145er Cristiane “Cyborg” Justino went toe-to-toe with former bantamweight queen Holly Holm in a five-round slugfest. Justino won yet again, proving again to be an unstoppable force. Also, Bellator champ Julia Budd successfully defended her title against Arlene Blencowe in a rematch that was far closer than their first encounter. Looking into January, just one ranked fighter will be in action, as Felicia Spencer looks to remain unbeaten against talented debutant Akeela al-Hameed.

Dropped from the rankings: Liz Carmouche (8)

Liz Carmouche’s drop to flyweight opened up a spot in the bantamweight division for Ketlen Vieira, who debuts in the top 10. Looking into this month, the only woman in the top 10 to compete will be Sarah Kaufman, who headlines Invicta FC 27 opposite Pannie Kianzad.

With the migration of numerous fighters to the UFC flyweight division, there has been a massive shakeup in the flyweight rankings. In terms of results, the biggest event of the month was the crowning of the UFC flyweight champion. In that bout, Cinderella story Nicco Montano defeated Roxanne Modafferi to be crowned the first-ever champion. The other big fight of the month came in the form of an Invicta title fight, where Jennifer Maia outlasted challenger Agnieszka Niedźwiedź to retain her belt. Two bantamweights moved down to flyweight and earned a ranking from the get-go. Alexis Davis bested fellow former bantamweight Liz Carmouche to earn her spot, while Lauren Murphy saved her UFC job in dropping down and defeating Barb Honchak. Another big win came in the form of Vanessa Porto who defeated UFC vet Milana Dudieva. She makes a quick turnaround, fighting Mariana Morais this month at Invicta FC 27.

There was a lot of important activity that happened in the strawweight division to end 2017. Tecia Torres scored a huge win over Michelle Waterson to put herself into the top contender’s talk. Former champion Carla Esparza halted the momentum of top prospect Cynthia Calvillo and reasserted herself back into the title picture. Finally, Felice Herrig continued her career resurgence in besting Cortney Casey by decision. As of now, there are no top-10 fighters scheduled to compete in January.

The atomweights were incredibly busy to finish off the year, a rare commodity for the division. UFC veteran Seo Hee Ham earned her biggest win to date, knocking out top fighter Jinh Yu Frey in a shocking finish. Mina Kurobe made a big jump up the rankings, scoring a victory over Jung Eun Park to keep her record as one of the most impressive at 105. Amber Brown knocked Tessa Simpson out of the rankings with a sweet first-round submission, reinserting herself back into the rankings. Janaisa Morandin’s permanent move up to strawweight came about as well, as she took her second-straight bout there, besting Kinberly Novaes at Invicta. The biggest winner of the month, though, is Kanna Asakura, who won the Rizin women’s tournament, defeating Maria Oliveira and Rena Kubota all in one night. Looking into January, the only woman in action will be Ashley Cummins, who takes on Stephanie Alba at Invicta FC 27.