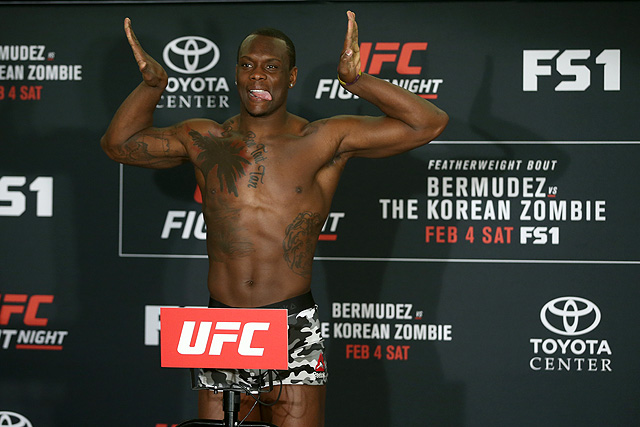 No disrespect to Jason Von Flue, but the choke that adorns his name is no longer his property. It now belongs to light heavyweight Ovince Saint Preux, who secured his third career win by the technique in the UFC Fight Night 117 main event against veteran Yushin Okami. Not only did OSP secure the win, but he put Okami to sleep, something that has never happened in the Japanese fighter’s lengthy career.

OSP’s win was hardly the biggest moment in Saitama, Japan. Brazilian Jessica Andrade put on one of the best performances of her career, besting her countrywoman Claudia Gadelha over three rounds. The strawweight war earned “Fight of the Night” honors in one of the best match-ups of the weekend. A performance bonus also went to former GLORY kickboxing champion Gökhan Saki, who put away Henrique da Silva with his patented left hook.

Lost in the busy weekend may have been Legacy Fighting Alliance’s 23rd event, which took place in Louisiana on Friday night. In addition to the two title fights that topped the card, rising flyweight prospect Sabina Mazo continued her ascension through the ranks with a violent, first-round knockout of Linsey Williams. The 20-year-old Colombian may be the future of the women’s 125-pound division.

LFA 23’s title bouts included a split-decision win for James Nakashima over Derrick Krantz in a welterweight-championship clash. Nakashima’s probably going to need to do better than such a close verdict if he wants to land in the UFC, but he remains undefeated after edging the veteran Krantz. Meanwhile, Andrea Lee retained her flyweight crown while adding another submission finish to her resume. Lee finished Jamie Thorton with a kimura in the second round.

Bellator 183 had the spotlight on Saturday night with the UFC visiting Japan the night prior. In large part, the card delivered, but it wasn’t without its ups and down. The main event between former title challengers Benson Henderson and Patricky “Pitbull” Freire was lackluster throughout. Henderson spent the majority of the fight seeking failed takedowns and slowing the pace. There was plenty of debate surrounding the split decision win for Pitbull, but the reality is that the fight wasn’t pretty.

The night’s co-headliner, however, was explosive. Paul Daley’s left hook has always been a dangerous weapon. He used it to put away Lorenz Larkin by knockout. Following the fight, Daley delivered a great dose of reality, stating, “I’m not really a mixed martial artist. I’m just a guy who loves to fight.”

Sticking with the up-and-down theme, heavyweight Roy Nelson made his debut and needed three rounds to top a game Javy Ayala.

Uber-prospect Aaron Pico got in the win column with a crushing left hand that sent opponent Justin Linn crashing to the canvas, but lost in the hype was the recklessness that Pico displayed and the glaring holes in his stand-up skills. No one will debate Pico’s wrestling pedigree, but if he fights like he did on Saturday night against a polished striker, he’ll end up staring at the lights.

One Bellator veteran added a win to his record overseas. Brandon Halsey took home a unanimous verdict in the M-1 Challenge 83 headliner, where he faced Mikhail Ragozin at light heavyweight. It was a nice bounce-back win for Halsey, who was on a three-fight skid following Bellator losses to Rafael Carvalho and John Salter and an M-1 Challenge loss to former Bellator middleweight kingpin Alexander Shlemenko.

In the main event of the Road FC 42 undercard, Russia’s Magomed Mutaev earned his fifth straight win when he knocked down South Korean Eun Soo Kim with a left hook and locked up a guillotine choke for the finish.

Byeong Ha Lim’s brutal kimura submission and Chinese super heavyweight Aorigele’s knockout in the main event are worth checking out.

Elsewhere on the card, former GLORY light heavyweight champion Saulo Cavalari lost in the first round by leg-lock submission to Pavel Doroftei.

Unless you read the Combat Press site with regularity, you’d never know that Bellator Kickboxing has two new champions. That’s because Viacom refuses to air the events live on Spike TV, choosing instead to run reruns of Cops.

American Kevin Ross edged out Italy’s Domenico Lomurno on the scorecards to capture the inaugural featherweight title at the event. Another American, Raymond Daniels, unseated champion Karim Ghajji by first-round TKO to secure the welterweight strap. This is great news for the striking arts in the United States, but because fans won’t get to see it until Oct. 6 via tape delay, the news will likely get buried and forgotten.

Reports out of the SAP Center in San Jose, Calif., on Saturday night stated that fans left in droves after the MMA portion of the fight card because the kickboxing portion was so poorly promoted. At this point, it’s unclear why the promotion even exists. It is tying up some very talented kickboxers and doing very little to further their careers or the sport.

Leading into the World Boxing Series event in San Antonio on Saturday, there was debate on whether Russian cruiserweight Dmitry Kudryashov is the hardest puncher in the sport. Cuba’s Yunier Dorticos quickly put that — and Kudryashov — to bed with a crushing second-round knockout via a right cross. Dorticos retained his WBA title and his undefeated record with the win. He moves on to the semifinals of the promotion’s cruiserweight tournament, where he’ll next face Oleksandr Usyk.