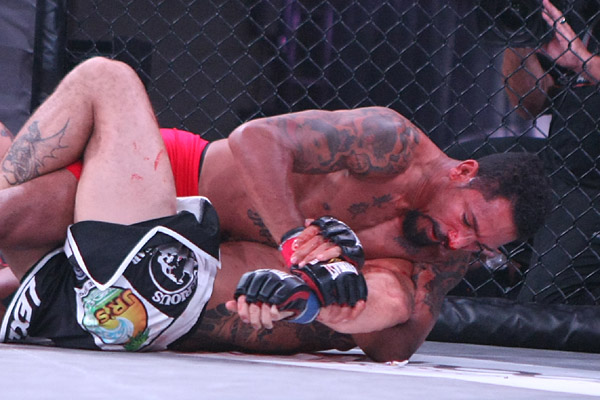 First came a TKO loss. Then another. Then there was a knockout. Then a submission. You could call it a very bad year. James “Binky” Jones opted to call it the end of his career.

After suffering four straight losses from 2011-12, Jones was ready to retire from mixed martial arts. He was ready to settle into a comfortable life as an instructor.

“I wasn’t in love with the sport anymore,” said Jones, 45, who trains at Team Ground Control in Baltimore.

Sometimes, taking a step back can do a world of good. Jones started to focus on teaching martial arts to children and teenagers at his gym. It was enough to reignite the love of the sport within Jones.

“Being around those young minds gave me something,” Jones said.

He returned to active competition in MMA. It was his turn to bring the finishes. First came a knockout. Then a TKO. Then another, this time in the first round. Then a first-round submission. It was a significant turnaround, the longest winning streak of the Baltimore fighter’s lengthy career.

He will carry that streak into his next fight, which takes place at Shogun Fights 13 on Oct. 24 at Royal Farms Arena in Baltimore. Jones will compete for the inaugural Shogun Fights featherweight title against fellow Maryland fighter Francisco Isata.

Winning titles is nothing new to Jones. He’s won multiple belts in other regional promotions, including winning an eight-man tournament where he upset a member of the famed Team Quest in the finals.

“I was an underdog who wasn’t even supposed to get out of the first round,” Jones recalled.

Instead, it was his opponent, Ian Loveland, who didn’t make it out of the first round. Jones submitted the “Barn Owl” via armbar in a little over three minutes of the opening frame.

Although Jones has competed all over the place in MMA, fighting in Baltimore for Shogun Fights holds a special place in his heart.

“This city stuck by me the whole time,” Jones said. “I won the main event on the very first Shogun Fights card, and I feel it’s my responsibility to help make MMA in Maryland great.”

Jones credits Shogun Fights founder John Rallo for working with Maryland politicians to have MMA events sanctioned in the state. He also points out Maryland fighters Ron Stallings and Mike Easton, who made it to the UFC. Jones also draws inspiration from a former student, a teenager named Rick Snyder who died after a battle with cancer.

“He told me to never give up,” Jones said.

Jones described his upcoming opponent, Isata, as a “tough guy” and “well-rounded” opponent, but said he plans to be in “amazing shape” when he and Isata step into the cage on Oct. 24.

“I can handle anything he can bring to me,” Jones said. “I’m going to push him, and I hope he pushes me.”

Winning titles is nice, but Jones has a different goal. He wants to help bring up the Baltimore youth he mentors “the right way.”

“I’m showing the next generation how to be better than me,” he said.