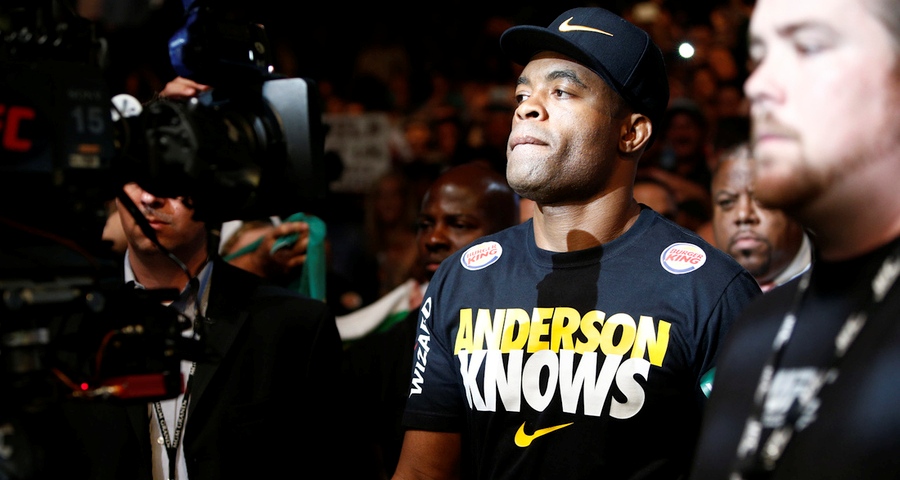 In The Dark Knight, Harvey Dent, portrayed by Aaron Eckhart, says probably the most iconic quote of the movie trilogy: “You either die a hero or you live long enough to see yourself become the villain.”

Anderson Silva was the hero. The greatest of all time was put on a pedestal by MMA fans who were thrilled by his dominant performances, his ability to turn fights into a slow-motion display and his taunting skills. However, Silva went one fight too far. Just one was all it took. He went from the greatest of all time straight to a bunch of “what if?” questions.

The 39-year-old was popped for steroids in the aftermath of his UFC 183 headlining bout with Nick Diaz. The actual test was administered on Jan. 9, long before Silva entered the cage and bested Diaz for five rounds. We’re not going to go into all the science terms that will be thrown around because, frankly, I’m a writer and not a scientist, chemist or biologist. What I do know is this: by being caught in his last fight, Silva’s legacy as the greatest of all time has been tarnished.

It’s shocking to think that somebody who has brought so much entertainment and so many great, inspiring performances could now be labeled a cheater. Furthermore, one has to wonder how long Silva has been using steroids. Was this a one-time thing because of his leg injury? It certainly would be as good of an answer as he could possibly give, but it doesn’t vindicate the former champion entirely.

The failed pre-fight drug test certainly raises more questions than it answers, but one question from the post-fight interview aimed toward Silva does require a response. The next time someone asks Anderson Silva if he is retiring, the answer should undoubtedly be a resounding yes.

The blemished reputation caused by perceived steroid use can be tough to overcome. Whatever he does, whether it be return and reclaim his belt or come back and be an ambassador for the sport, Silva has tainted his legacy. A legacy that was built over a decade in the sport is just gone. The failed steroid test is essentially a fire in a house of straw.

Silva can’t come back and be as revered as he once was. It’s just not possible. There will always be a stigma following him around for the rest of his career. People will ask, “Is this victory aided by steroids?” Even a clean drug test, pre- and post-fight, won’t put the subject to rest. People will still wonder if he cheated.

It’s funny to think that if Silva does retire he will join rival Chael Sonnen as a fighter pushed into retirement by a failed drug test. Who could have seen that one coming?

It could be said that Silva has nothing left to prove. His long reign as the UFC’s middleweight champion began in 2006 and lasted until 2013, by which time he had made 10 successful title defenses, broke a number of UFC records and garnered consideration as the greatest of all time. Now, even that “GOAT” label is thrown into question. Fedor Emelianenko may just reclaim that title.

Silva put it best in October in an interview with MMAJunkie:

That’s right. Those are Silva’s words, and now here we sit. Awkward. It isn’t an indictment on Silva’s past fights. It doesn’t tell us that he in fact has done this previously. What it does tell us is that he believes that when you use drugs you are a habitual user. What we have here is a situation where Silva appears to be a hypocrite.

We’ll hear eventually what Silva has to say, but at this point there is no saving grace for the former champ. He cheated, he was caught and he will eventually will pay a price. However, that price shouldn’t be a fine or a nine-month vacation away from competition.

Whatever the excuse, Silva should take advice from his own words: no more fights. Retirement isn’t just the best bet for him, it’s really the only bet for him.

Now, we fall back onto what Georges St-Pierre has pointed out about the sport. Drug use is a serious concern. When somebody like Silva gets caught, nobody is going to be safe from scrutiny, even with the most miniscule of evidence. We have now seen it all. Silva was a great hero for the sport, but now, instead of taking retirement after breaking his leg, he has gone on long enough to see himself turn into a villain.