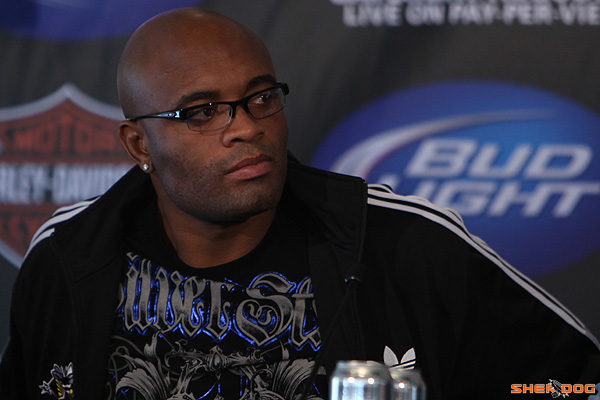 On June 28, 2006, a 31-year-old Brazilian named Anderson Silva made his UFC debut against Chris Leben. He was relatively unknown to the UFC audience at the time and many assumed Leben, fresh off publicity from the inaugural season of The Ultimate Fighter, would beat the Brazilian. However, instead of a great start to an average UFC career for Leben, it was the start of the UFC career for a man who would come to be known as possibly the greatest mixed martial artist to ever walk the earth.

I make no exaggeration in saying that this fight was as one-sided as it gets. Leben, as ever, walked down the Brazilian with constant pressure and attacks, only to be beaten to almost every punch and kick. Silva continued the onslaught until 49 seconds remained in round one. That’s when Silva finished Leben off with punches on the ground, thus earning himself a shot at the reigning middleweight champion of the moment, Rich Franklin.

Many knew Silva’s capabilities, but they weren’t quite fully ready to board the hype train. Then, Silva went out to the Octagon at UFC 62 and destroyed Franklin with a knee in the very first round to become the new UFC middleweight champion. The Brazilian followed his championship victory with a set of title defenses against Travis Lutter, Nate Marquardt and, in a rematch, Franklin. His next fight came against the first man in quite some time that people generally believed could beat “The Spider.” That man, of course, was Dan Henderson.

It was a superfight in today’s terms, a match to unify the Pride welterweight championship in Henderson’s possession and Silva’s UFC middleweight title. After a close first round, Silva submitted the American just 50 seconds into the second frame, further solidifying himself as the best middleweight at the time.

After numerous title defenses, Silva decided to make the bold move of stepping up to light heavyweight to face Forrest Griffin at UFC 101. Many viewed it as a risky choice that put his reputation on the line, but Silva believed in his capabilities. It showed on fight night. Silva produced one of the most beautiful knockouts the sport had ever seen, with dazzling head movement, accuracy and power. This really opened the public’s eyes to his special talent.

After a lackluster performance versus Demian Maia at UFC 112 in the company’s inaugural visit to Abu Dhabi, Silva met Chael Sonnen, a trash-talking middleweight who had worked his way up the ladder to face Silva. The fight became a huge spectacle due to Sonnen’s talk leading up to it, but the wrestler backed up every word as he dominated Silva for almost 25 minutes. Miraculously, though, Silva dramatically shifted the momentum and caught Sonnen in a triangle choke in the dying minute of the grueling encounter.

However, it was not until the Brazilian faced Vitor Belfort at UFC 126 that his potential as a Brazilian star skyrocketed. Belfort is a huge name in Brazil and an idol for many. When Silva knocked him out, especially in the fashion he did, it made him into a huge star.

Silva then went on to defeat Yushin Okami at UFC 134 in an effortless performance before encountering the “American Gangster” Sonnen yet again at UFC 148. After incomparable build-up to one of the biggest fights the UFC has ever put on, Silva proved he was the better man for a second time, stopping Sonnen in the second round after a vicious knee to the solar plexus. Silva then stepped up to face Stephan Bonnar at UFC 153 in Rio De Janeiro after the original card was ravaged by injuries. He stopped Bonnar with a flying knee to the chest in the first round.

Silva’s next foe would bring an end to an era. He met phenom Chris Weidman at UFC 162 in July 2013. Weidman was seen as a legitimate threat to beat Silva, but the manner in which he did so left the whole world shocked. Weidman had done the seemingly impossible task and knocked out the Brazilian in the second round to become the new UFC middleweight kingpin. Silva’s almost eight-year title reign was over abruptly and shockingly. Silva returned to face Weidman in a rematch, but it ended shockingly yet again with Silva snapping his tibia in the second stanza on Weidman’s leg check.

Upon immediate reaction to seeing it unfold, almost everyone counted out Silva’s return, even those surrounding him. However, Silva was always truly a special, special athlete, capable of doing things other men just cant do. His recovery was remarkable. Silva was walking after two weeks, kicking lightly again in a matter of two months and was back to training in just over six months. Now, Silva is set to make his long-awaited return in one of the most anticipated fights of 2015 when he takes on Nick Diaz at UFC 183 on Jan.31 in Las Vegas.

Guys like Silva come around only once in a generation, and MMA fans should make an effort to enjoy every second while he’s still performing at an elite level. We truly never know when it’ll be the last time. He’s the greatest fighter of all time. He’s Anderson Silva.