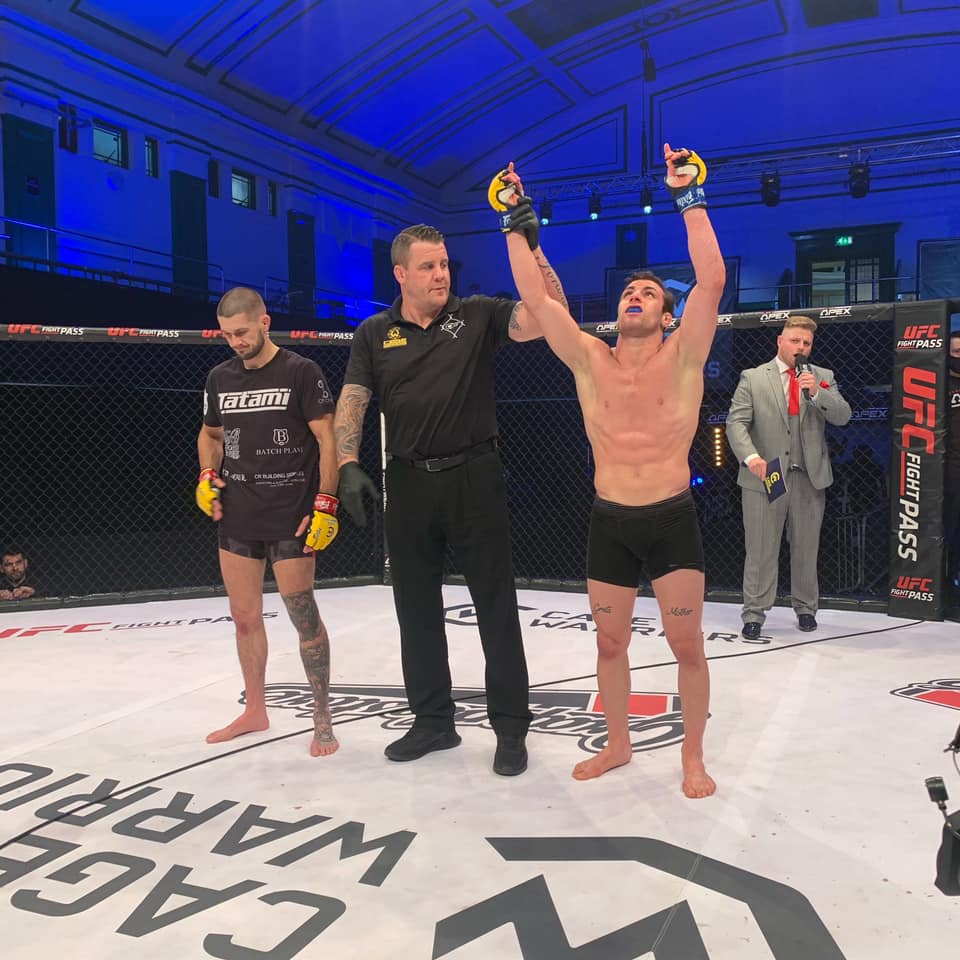 Three undefeated Italian fighters will be in the spotlight this weekend at back-to-back Cage Warriors events. Today at 1 p.m. ET, at Cage Warriors 135 in Manchester, England, there will be the promotional debuts of Federico Pasquali and Giuseppe Ruggeri.

Ruggeri is just 22 years old and is 7-0 with 2 knockouts and 2 submissions. His last fight was a first-round TKO victory in Dec. 2021 over Daniele Miceli, who previously faced former UFC fighter Danilo Belluardo and Bellator veteran Daniele Scatizzi. It will be the first fight outside of Italy for the Aurora MMA Rome representative. Aurora MMA Rome is the biggest team in Italy and home base to many top fighters including Mauro Cerilli, Carlo Pedersoli, and Belluardo, among others. Teammates Pedersoli and Michele Martignoni are now signed with Cage Warriors, and teammate Dylan Hazan that will fight tomorrow at Cage Warriors 136.

Ruggeri is a well-rounded fighter, and he will compete in the featherweights division when he faces the more-experienced Englishman Dean Trueman. The Derby native has been a pro since 2011, and his Cage Warriors debut was in 2014. He holds a record of 10-7 with 5 knockouts and 1 submission. His currently on a three-fight losing streak, so this bout looks like a last chance not only for Cage Warriors, but for his career.

Federico Pasquali will also making his international debut, in a catchweight bout at 150 pounds. The 28-year-old fighter from Tuscany will face Scotland’s Paull “The Locomotive” McBain.

A member of MatSide BJJ Livorno, Pasquali is 9-0 overall, and 6-0 as a pro with five finishes. On the other side, McBain looks much more experienced with a pro record of 7-2 (4-2 in CW) and five finishes. His last fight was a TKO victory in the second round last December at Cage Warriors 123 over Konmon Deh.

On Saturday, Apr. 2, Cage Warriors 136 will kick off at 1 p.m. ET with the already well-known Hazan. The 27-year-old fighter is a native of Bari Apulia where is very popular, and he is now member of Aurora MMA under coach Riccardo Carfagna. His amateur debut was in Oct. 2018, with his pro debut coming just four months later. His international debut was at Cage Warriors 124 in Jun. 2021, where, on short notice, he defeated the more experienced Josh Reed by unanimous decision. Last October, at Cage Warriors 129, he defeated Scott Malone by split decision.

Hazan now holds a record of 7-0 with 3 knockouts. Basically, he has dominant wrestling and heavy ground-and-pound, because of his high-level background in Olympic wrestling. He was national champion in Greco-Roman and in freestyle wrestling and a member of the Italian national team. Saturday, in the flyweight division, he will face the Brazilian Raymison Bruno “Formiga”. The south American has been a pro fighter since 2013, and this will be his first match in Cage Warriors after fighting in Brazil, Japan, Russia, Spain and the U.K. He holds a record of 12-3-0 with one no-contest and four submissions. In his last fight, he lost a split decision after facing the Russian Vartan Asatryan at Fight Nights Global 95 in Sochi. Formiga is a BJJ black belt and is more experienced in MMA than Hazan. This will be a classic clash between a veteran and an up-and-comer, as well as wrestling vs BJJ. This will be something very interesting for the fans of grappling in MMA.