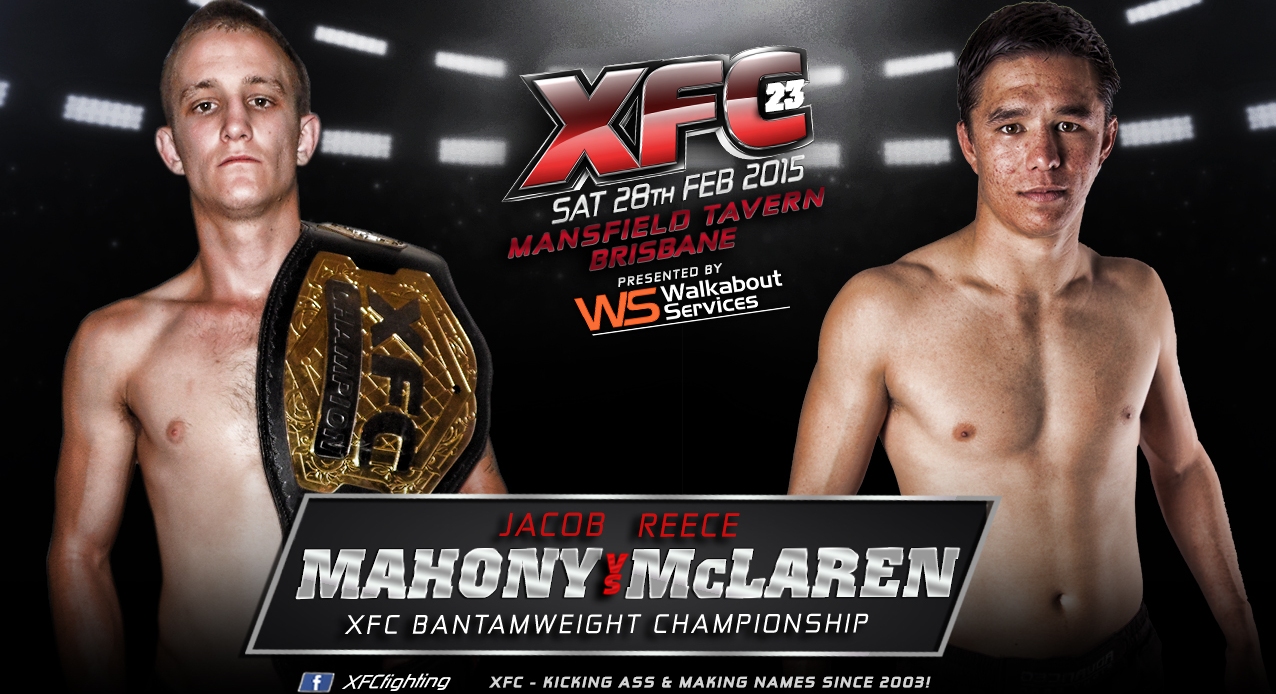 XFC’s bantamweight champion has a challenger.

Combat Press has learned that Jacob Mahony is scheduled to defend the XFC bantamweight title against Reece McLaren on Feb. 28, 2015 at XFC 23 which takes place at Mansfield Tavern, Brisbane, Australia.

XFC promoter Justin Lawrence told Combat Press, “Mahony has essentially cleared the division in Australia and Reece was the only guy that wanted the fight. In fact, he pleaded for the bout.

“This is the bantamweight fight that [UFC matchmaker] Sean Shelby needs to watch to see who is the very best Aussie 135-pound fighter. Jacob is now a three-time defending champion and we are stoked to see a fighter of McLaren’s caliber challenge him for Australia’s oldest bantamweight title, which was first held by Brazil’s Daniel Lima in 2003.

“Jacob is Australia’s most experienced active domestic fighter and has finished every XFC fight in the first round, including a recent ground and pound stoppage over Richie Ivory, who was coming off a three-round decision loss to the BRACE champion Jordan Lucas.”

Mahony, who enters the fight riding a three-fight winning streak is undefeated under the XFC banner and the bout with McLaren serves as his third title defense. The last time the pair met, Mahony defeated McLaren via third-round rear-naked choke.

“Since I lost to Julz [Julian Rabaud] in 2012 I’ve won seven from eight with three title defenses so I’m feeling like I’m going good right now,” said Mahony. “I told Justin, ‘I’ll fight whoever you find as long as they are the best you can find.’

“I’m excited about Reece because I know what it was like being in there with him, I know what he has, I know what I can do to him and where I’ve improved and I’m keen to show it . Some people think Reece was in control in our last match but I know what I felt in there and I took my opportunity when it came up to finish the fight.

“I respect the XFC belt , it’s why I train as hard as I do . It’s why I’ve been back doing hills with my coaches at 5 a.m. before work, it’s why I’m rolling with beasts every night ’till it hurts. I’m not losing again, I know what it means to lose and I know what it means to win. I’ve had 21 pro fights in and out of my weight [class] and no one’s scared me yet. I’ve won this fight once before and I’ll do it again. I’m one of the best this country has to offer and I’ll show that again Feb. 28.”

McLaren will be looking to bounce back after a tough fought decision loss at the hands of American Ben Nguyen. Prior to that bout, McLaren had won two fights in a row, both by way of stoppage.

“Fighting for the XFC bantamweight title feels great, with it being the oldest [Australian] title and being on a show that has cemented itself with fighters that are now competing at the highest levels, I only hope I can follow in their footsteps,” said McLaren. “Fighting Mahony again, I’m not a fan of rematches but it feels like this one had to be done. It’s the only fight people seem to remind me of all the time. It hurts the same then as it does now. I was inexperienced and made a mistake that Jacob capitalized on. It taught me, Jacob taught me real good.

“He’s on a tear and he took something that belonged to me, now I can repay the favor. With this fight in XFC, I hope to gain more overseas opportunity. I think this fight will help tenfold.”

The bantamweight title fight serves as the co-main event, with the event being headlined by a featherweight title fight where champion Shane Young will be defending his title against Julian “Julz the Jackal” Rabaud.

Also scheduled for the card is the professional debut of XFC amateur welterweight champion Ty Duncan and a title defense for amateur lightweight champ Gavin Hain.

Tickets for the event are available from the promotion, and inquiries can be sent through email (info@XFCfighting.com) or over via telephone 0432 277 709.