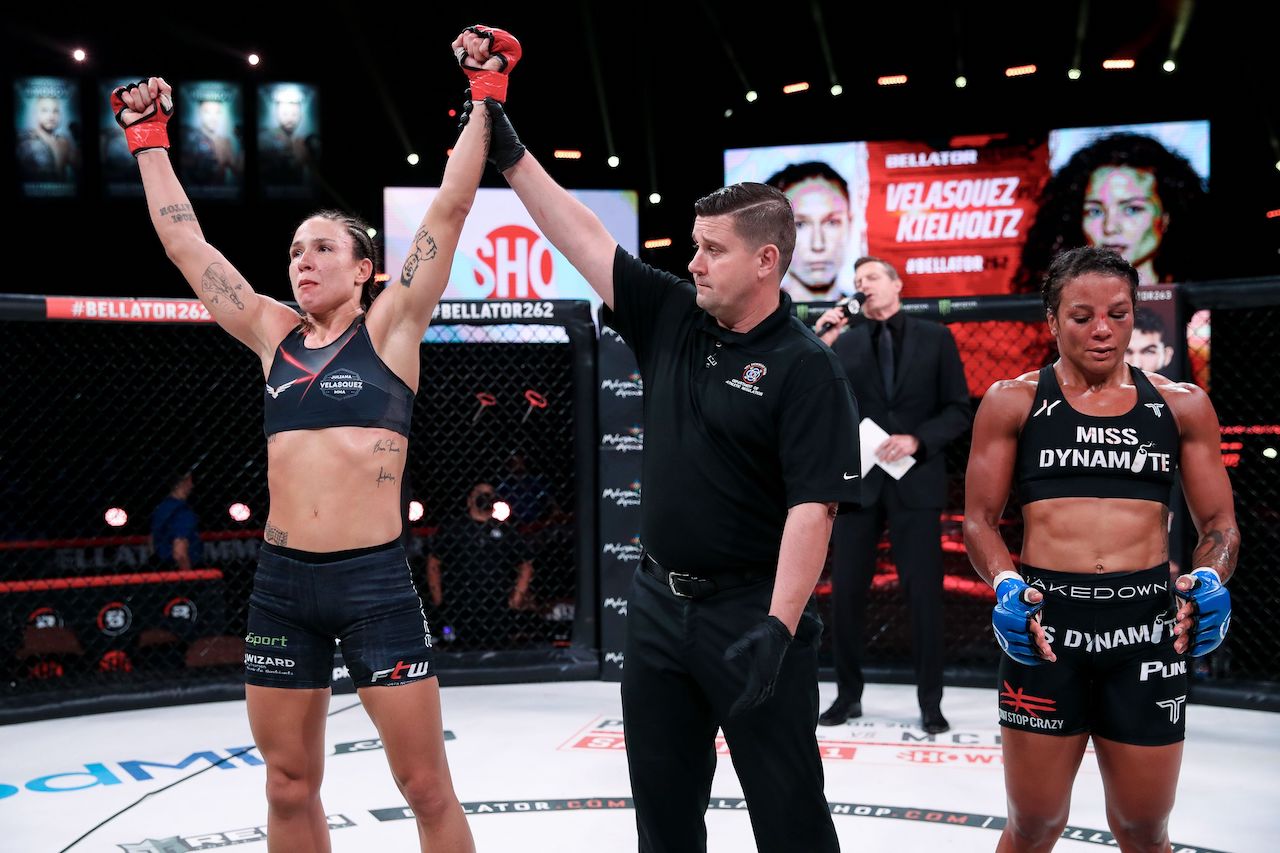 This weekend’s women’s MMA action had a title fight, a return from an all-time great, a retirement and a new title contender emerge. A very exciting weekend of fights. So let’s not waste any time and take a look at them.

This was Reneau’s last fight and I have so much respect for her as both a fighter and a woman, so I absolutely refuse to review a fight with any “what could Reneau have done differently” comments. Instead I am just going to take a look at what Tate did and what I liked out of her.

I expected, as did most I am sure, Tate to be grappling-heavy in this fight. It’s her proverbial bread and butter, where she excels and her biggest advantage. And she did use her grappling, but she did so much more.

Right out of the gate, I really loved how she came forward. She was willing to engage with Reneau, a risky idea, but an idea that paid off. I think it paid off because of Reneau’s output being low and Reneau moving so much to avoid the takedowns. Reneau was circling a lot, moving to her left mostly. Tate was able to come forward and while she did get hit, avoid getting caught in any really big exchanges.

It’s common sense right? It’s harder to throw punches when you are moving backwards and side to side than it is when just moving forward. That lack of output from Reneau also helped Tate because she knew there wasn’t anything coming back at her. What Tate also did well in this situation is something you see me mention a lot, cut off the cage. She did not follow Reneau, she moved side to side with her. This limited how much space Reneau had to move.

Let me use symbols to explain. If you follow someone, think of it like the letter O. You follow them, they move in a circle and you are really just moving in that circle with them and they can continue to move and escape without interference. Now let’s look at cutting them off. Think of it as this an equal sign (=). With them moving side to side and you moving side to side, you’ve eliminated their ability to circle and their escape.

Tate did get her takedowns and did show her elite wrestling. When it went down, Reneau did throw some nice upkicks, but once Tate was able to pass and get a good position, it was her fight. She showed she isn’t afraid of the stand-up battle and then used her biggest strength to solidify rounds. In the third she got it down, unloaded her ground and pound and the ref stopped it.

Did Tate show herself to be a title contender after all these years? I think so. The biggest thing for her is that she still has the ground game. No matter what is happening, she will always have that to fall back on. If she takes you down, she can control you. Can she hang with and even beat the top five? I really think she can. I won’t say she absolutely will, but she has the ability to beat them. Can she win the title? Well, Amanda Nunes still exists, right? Beating her is not something you predict anyone to do.

What is next for Tate? I am already seeing all kinds of names being thrown about, mostly top-five names. I would rather one more before that. How about Pannie Kianzad next?

What is there really to say about this fight? Lemos did what she does, landed a hard punch. They exchanged right out of the gate, Lemos landed a counter right and dropped Ruiz. The Brazilian followed up with one on the ground and just thirty-five seconds in, it was over.

Now, I have seen a lot of complaints about the stoppage, people noting that Ruiz got right back up. Yes, yes she did and MAYBE the ref could have let it go on, but I am 100 percent okay with the stoppage for two reasons. First, she was able to bounce right back up because Lemos had been pulled off of her. If Lemos isn’t pulled off her, then she keeps landing shots to someone who was mostly defenseless. Ruiz’s hands were not in a position to defend herself, and being conscious is fine, but if you can’t defend yourself, you are still screwed.

Also, yes she did bounce up, but look at the seconds after bouncing back up. It’s not as though she bounced up and was right there in the fight. She gets up, which you can say was reactionary, and stumbles back immediately. This is why we sometimes tell a fighter to let another fighter back up. Because they are hurt, they are in trouble, they won’t be able to defend themselves. Ruiz’s body language was that of a fighter we would tell an opponent to let up.

What is next for Lemos? Angela Hill and Tecia Torres have a bout coming up, how about Lemos against the winner of that?

This was a very good and very close fight. In the beginning, Velasquez did as I said she might in my preview, she started slow and cautious getting the timing of Kielholtz down. Velasquez is so confident in her ability that she is willing to give away the first round in order to get the information she needs in the following rounds.

Kielholtz, for her part, fought a very smart first round. She was able to close the gap, get inside and land some very good shots. I think in some ways, this messed with what Velasquez was trying to do. What’s the best way to stop someone from getting your timing down? Keep hitting them!

After round one, it really became about which you preferred. Kielholtz was coming forward and would land some good shots, but Velasquez in a way, allowed it because she wanted to counter. There is no right or wrong answer here because you are basically deciding which kind of striking you prefer. This wasn’t so much about damage because I don’t think either did significantly more damage than the other.

I would have liked to see more low kicks from Kielholtz. That’s not to say she didn’t throw any. But I really would have liked to see her just relentless with them. Had she thrown more of them, she might have caused Velasquez to have trouble planting her feet and getting as much power in her counter strikes. It also might have forced her to change her stance a bit and Velasquez is someone who is a bit rhythmic. If you break that rhythm and make her do things she isn’t used to, you can get some hesitation out of her.

For Velasquez, I would have liked to see her be more aggressive. As I said, she has her style, it works and she keeps winning. But she fought an aggressive elite striker, who was going to come forward no matter what and land. That put Velasquez in a situation where the visuals from her opponent looked better. To people watching, Kielholtz was coming forward, landing hard shots and the counters of Velasquez were not as aesthetically pleasing. In a sense, Velasquez allowed Kielholtz to do the things that would look good to the audience and potentially the judges.

Round five got interesting as Kielholtz landed the best shots of the fight early in the round, but after that Velasquez composed herself and got right back to work and to me, finished the fight very strong.

Now, the judges had it 48-47 for Velasquez twice, whereas one had it 48-47 for Kielholtz. I actually had it 49-46 Velasquez giving her rounds 2-5. That being said, there were so many close rounds that 48-47 Kielholtz was perfectly acceptable to me. There is no way the “robbery” talk is justified. Both ladies showed themselves worthy of the headlining status.

What is next for Velasquez? I think it is safe to say that coming off her quick win over Kana Watanabe that Liz Carmouche will be next.