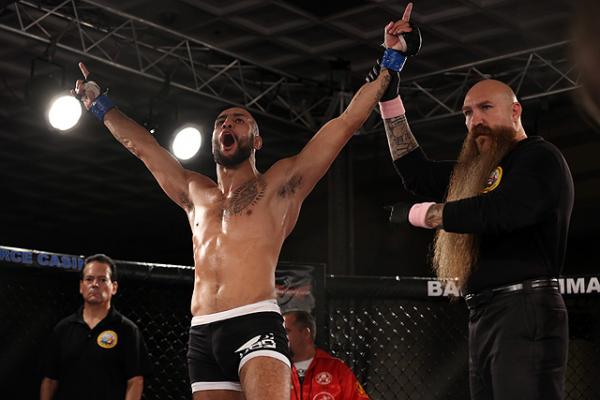 On Friday, Dec. 5, Resurrection Fighting Alliance will head to Costa Mesa, Calif. for its 21st event. The promotion will visit the the OC Fair & Event Center in Orange County. The night’s main card will air live on AXS TV.

In the night’s main event, the promotion will crown a new lightweight champion as WKBC Muay Thai world champion Mehdi Baghdad takes on Zach Juusola. France’s Baghdad made a huge statement in his RFA debut in September, stopping Evan DeLong with a violent, first-round stoppage. The striking specialist has spent time in Brazil and has amassed 10 wins inside the cage. Juusola, meanwhile, has put together 10 wins in 12 career fights, including back-to-back finishes under the Driller Promotions banner.

The co-main event of the evening will feature a bantamweight duel between Orange County’s Joe Murphy and Brazil’s Bruno Frazatto. Murphy is a WSOF veteran who carries a 7-1 record. Five of his seven wins have come via submission. Frazatto, meanwhile, also has tasted defeat just once in his career. Like his opponent, four of his six wins have come on the ground, including his first-round destruction of Cory Galloway at RFA 17.

Also announced for the card is a featherweight contest between Altair Alencar and undefeated RFA veteran Sam Toomer, a middleweight bout featuring Francisco “Kiko” France and Paraguay’s Mikey Gomez, a heavyweight collision between UFC vet Chase Gormley and the undefeated Dale Sopi, and a 190-pound battle between Blake Troop and Khalil Rountree. Troop will step in on just 10 days’ notice after Rountree’s original opponent, Justin Jones, was called on to face Corey Anderson at UFC 181 on Dec. 6.