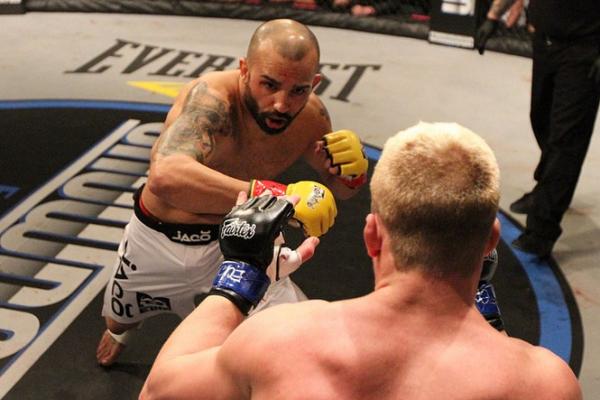 If a fighter has 26 professional fights, trains full-time and runs his own mixed martial arts gym, you would think he makes the big bucks in the UFC, or maybe Bellator, right? But would you believe this fighter is perhaps best known for raising the profile of MMA in his home state?

That’s right. David Castillo, who has an overall record of 19-7 in his career, has not fought for the UFC, Bellator or even the World Series of Fighting. At least not yet.

“I was in some fights where I probably would have made it to the UFC if I had won,” Castillo told Combat Press.

However, he is not resting on his laurels in his native Utah, waiting for a call to the big show. Instead, Castillo, 33, is active in bringing more attention to the presence of MMA in his home state.

His next fight should do just the trick. Castillo, who fights on behalf of Showdown Fights in Utah, will face Zach Juusola from the Resurrection Fighting Alliance in a special joint card for RFA’s lightweight title on Feb. 19 in Orem, Utah.

Castillo said he is “honored” to headline the RFA/Showdown Fights card and described Juusola as a “tough opponent.”

“This card is on national TV, so I hope to shine. And with my training, I can fight to my potential,” Castillo said. “People who don’t know me can see what I bring to the table, and the sky is the limit.”

In addition to his fighting career, Castillo runs his own gym, The Garage MMA, in Layton, Utah. After taking part in football and martial arts growing up, he decided to try out for MMA after hearing about a gym owned by former UFC fighter Jeremy Horn.

“I didn’t really know who he was, but I watched him fight,” Castillo said. “I was always into combat sports and once I showed up, I never left.”

Castillo made his MMA debut after six months of training and won his first seven fights. He describes his initial fighting style as that of a “heavy-handed boxer.”

“I’m not scared to be in a fight; I thought I was invincible,” Castillo said. “I took chances in fights and even though I didn’t know jiu-jitsu, I never hesitated. I just wanted to get in there and get the fight started.”

Castillo now boasts a brown belt in jiu-jitsu and said he has to keep evolving mentally, physically and emotionally to keep up with the newest batch of MMA fighters coming on the scene.

“That’s what it’s about — evolving with the sport,” Castillo said. “These new guys have been training in it their whole life. Are you getting enough rest? Do you have enough training? MMA is my life.”

Castillo’s life also includes a family to go with his full-time MMA career and owning and operating a gym. His two children, ages 3 and 7, are always with him at the gym. The gym is a responsibility in itself, though.

“I make sure people get what they need at the gym, and I make sure I get what I need with training,” said Castillo.

In addition to Showdown Fights, Castillo has fought for multiple other promotions in Utah, including Jeremy Horn’s Elite Fight Night.

“There are enough to shows to keep me busy, and there are guys willing to put in the work,” Castillo said of the Utah MMA scene.

While making it to the UFC, Bellator or the WSOF continues to be Castillo’s ultimate goal, he also hopes fighting for a title from a national promotion like RFA can provide a platform for his fellow Utah fighters.

“We have more guys from Utah; there’s a lot of talent here,” Castillo said. “It’s just a matter of getting it out there.”