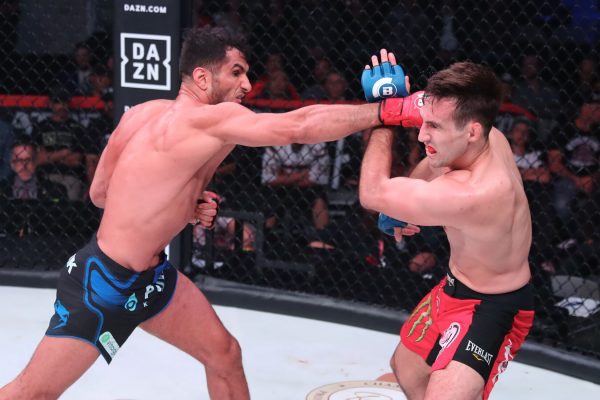 Two weeks removed from crowning a new champion in the culmination of the featherweight grand prix, Bellator is back in action with Bellator 264. Current champion Gegard Mousasi looks to begin his second title reign by defeating John Salter. Salter is riding a hot streak, winning eight of his nine fights since signing with the promotion. His only loss in that stretch came against retired former champion Rafael Lovato Jr, the man who ended Mousasi’s first run as middleweight champion.

The co-main event pits former welterweight champion Andrey Koreshkov against Sabah Homasi. Koreshkov is looking to notch back-to-back victories for the first time since 2018. Homasi, meanwhile, seeks to rebound from a TKO loss to Paul Daley in a thrilling back-and-forth affair.

Bantamweight rising stars Raufeon Stots and Magomed Magomedov will also meet on the main card. Each fighter is looking to earn a title shot with an impressive victory. The main card will also include a heavyweight contest between Davion Franklin and Everett Cummings. It kicks off with a middleweight clash with Ty Gwerder taking on Khadzhimurat Bestaev.

Bellator 264 takes place from the Mohegan Sun in Uncasville, Conn. Preliminary fights can be seen on the Bellator MMA YouTube channel and the main card will air on Showtime.

Gegard Mousasi reclaimed the vacant middleweight title in his last fight; will he make his first successful defense against John Salter?

There is very little Mousasi has not accomplished throughout his impressive MMA career. The former Pride, Strikeforce, Dream and UFC contender is one of the most accomplished fighter who is not currently signed with the UFC. Mousasi has just one loss since February of 2016 and his notable wins include victories over Thiago Santos, Uriah Hall, Chris Weidman, Rory MacDonald and most recently Douglas Lima. His most recent loss came at the hands of Rafael Lovato Jr., who executed a near perfect game plan against the Dutch native to win a majority decision.

Despite this, Mousasi reclaimed his lost title by comfortably defeating Lima. Mousasi is one of those rare talents whose impressive mixture of striking, grappling, cage control and poise all come together in spectacular fashion. Despite his bread and butter being the stand-up game, Mousasi has the ability to take opponents down and gain favorable positions. Riding a two-fight winning streak and fresh off reclaiming his throne, Mousasi will have to edge the always game and tough Salter.

Salter has been near perfect in his Bellator campaign since joining the promotion in January of 2016. The Alabama native has compiled an impressive 8-1 record during that time. His sole loss came at the hands of Rafael Lavato Jr. Despite his pedigree as a gifted grappler, Salter has consistently shown his ability to finish fights both on the feet and ground. He possesses one of the more dangerous rear-naked chokes in Bellator today. Salter utilizes a relentless pace and attack to continuously pressure and outwork his opponents.

Salter’s strength is his ability to constantly push the pace and tire his opponent with constant pressure. The 18-4 Bellator contender has a plethora of experience and will look to capture the most significant moment of his career.

There are few Bellator middleweights who have the ability to give Mousasi a hard time in the cage. Unfortunately for Salter, he is not one of them. Despite both suffering losses to Lavato Jr., Mousasi remains the better fighter of the two at this point in their careers.

Salter will look to pressure Mousasi into constant exchanges but will find little success as Mousasi matches the challenger’s aggression and output. Mousasi will use his kickboxing to constantly slam the legs and body of Salter. Those precise shots will pay dividends as the fight goes on. At some point in round three, Salter will have exhausted all options and Mousasi will capitalize. He will finish Salter by gradual dismantling, capped off with a submission or TKO stoppage.

Andrey Koreshkov has alternated wins and losses since 2018; does the former champion make it two straight victories by defeating Sabah Homasi?

Despite dishing out 10 knockout victories throughout his career, Homasi has suffered some significant knockout losses since 2016. The former UFC welterweight had certainly built some momentum prior to facing Paul Daley at Bellator 257 by compiling a three-fight winning streak. However, Daley derailed that streak. The loss sent Homasi tumbling to the No. 10 spot in the Bellator welterweight rankings. Still, Homasi is a brawler who continues to exchange with his opponents until he or his opponent goes down in spectacular fashion.

The Koreshkov who dominated the Bellator welterweight division between 2014 and 2016 seems to have disappeared. After suffering a brutal knockout loss to Douglas Lima, he relinquished his title. Since then, he has had a mixture of impressive and poor performances. Despite an up and down last couple of years, Koreshkov remains one of the most dangerous and talented welterweights on the roster when he is on his game.

This fight is Koreshkov’s to lose. The former champion is immensely more talented than Homasi and should be able to finish this fight via whatever way he desires. Homasi has a tendency to get lured into exciting exchanges that result in him turning into a punching bag. If Koreshkov can perform at 80 perecent of what he is capable of, he’ll put Homasi away.

Both Magomed Magomedov and Raufeon Stots have only tasted defeat once in their careers; which fighter picks up the victory when the two square off?

The bantamweight showdown between Magomedov and Stots is probably the most exciting showcase of the evening. Both of these prospective contenders have been nothing short of impressive throughout their careers. Both combatants are relentless wrestlers and grapplers who put enormous pressure on their opponents. This fight is a coin flip and the winner will ultimately be decided by who is able to better implement their game plan as the fight progress.

When it is all said and done, Magomedov will earn himself a closely contested decision victory after an extremely competitive and tasking bout. Both of these bantamweights are must-watch names as they continue to progress in their professional careers.

Ty Gwerder vs. Khadzhimurat Bestaev takes the cake on this one folks. Both of these middleweights are coming off losses and have finished all of their wins via TKO or submission. Expect both to come out eager to get back in the win column. This will result in a wild fight full of memorable exchanges, knockdowns and pure excitement.