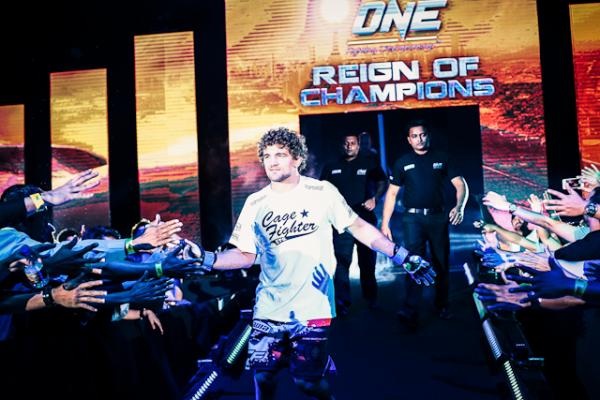 MMA Loses Its Funk: Ben Askren’s Career Ends With ‘What If?’

Last weekend marked the end of one of MMA’s most interesting careers. It only took Ben Askren a mere 57 seconds to finish Shinya Aoki at ONE Championship: Immortal Pursuit. Askren walks away from the sport with a perfect 18-0 mark. He also leaves behind a big question of what could have been.

The man known as “Funky” may not be the household name that Georges St-Pierre is. He may not have been blessed with ridiculous athletic ability like fellow former Mizzou wrestling standout Tyron Woodley, either. But perhaps Askren is the greatest specialist the sport has ever seen and the best fighter to have never competed inside the Octagon.

The Zuffa years of the UFC were no doubt the glory days of the promotion, and UFC President Dana White did a reasonable job signing the best fighters in the world, but the two unsigned names that stand out are those of Fedor Emelianenko and the aforementioned Askren. It’s safe to say most people consider Fedor the greatest of all time. However, it’s quite possible that Askren is the single missed signing for the UFC.

Unfortunately, professional sports can involve plenty of politics. MMA is no different. This contributed to the UFC’s decision not to bring Askren aboard. Not only did White not want Askren’s “boring” style in the UFC, but he probably didn’t want to elevate a longtime champion of a rival promotion. Askren didn’t exactly have kind words for White and the UFC either. It’s just too bad we never got to see Askren take on the best fighters in the world only because of personal and professional differences.

Askren is the bigger missed opportunity, because we at least we got to see Fedor fight high-level former UFC fighters like Tim Sylvia and Andrei Arlovski. We are only left to ponder what could’ve been with Askren, who never faced a more accomplished UFC veteran than Jay Hieron, a fighter that never cracked the UFC’s top 10. Could Askren have been as dominant of a fighter if he had competed in the UFC in his prime? Would he still boast an unblemished record? Would we throw the name “Funky” into the GOAT conversation?

The sad fact is that most people will never see an Askren fight. They’ll never be able to truly appreciate how exceptional a grappler he is. The closest example of a one-dimensional specialist in the UFC is Demian Maia. Not to take anything away from Maia, but Askren could’ve had a higher ceiling in the UFC’s welterweight division during that stretch.

At 33 years old, Askren has decided to hang ’em up for good — well, so long as he doesn’t get offered a super fight against none other than the aforementioned GSP. Askren relishes the opportunity to show that he is the best welterweight on the planet, but he is only interested in fighting one man to prove what he already knows: “Funky” grappling is an entirely different level of grappling than the UFC has ever seen.