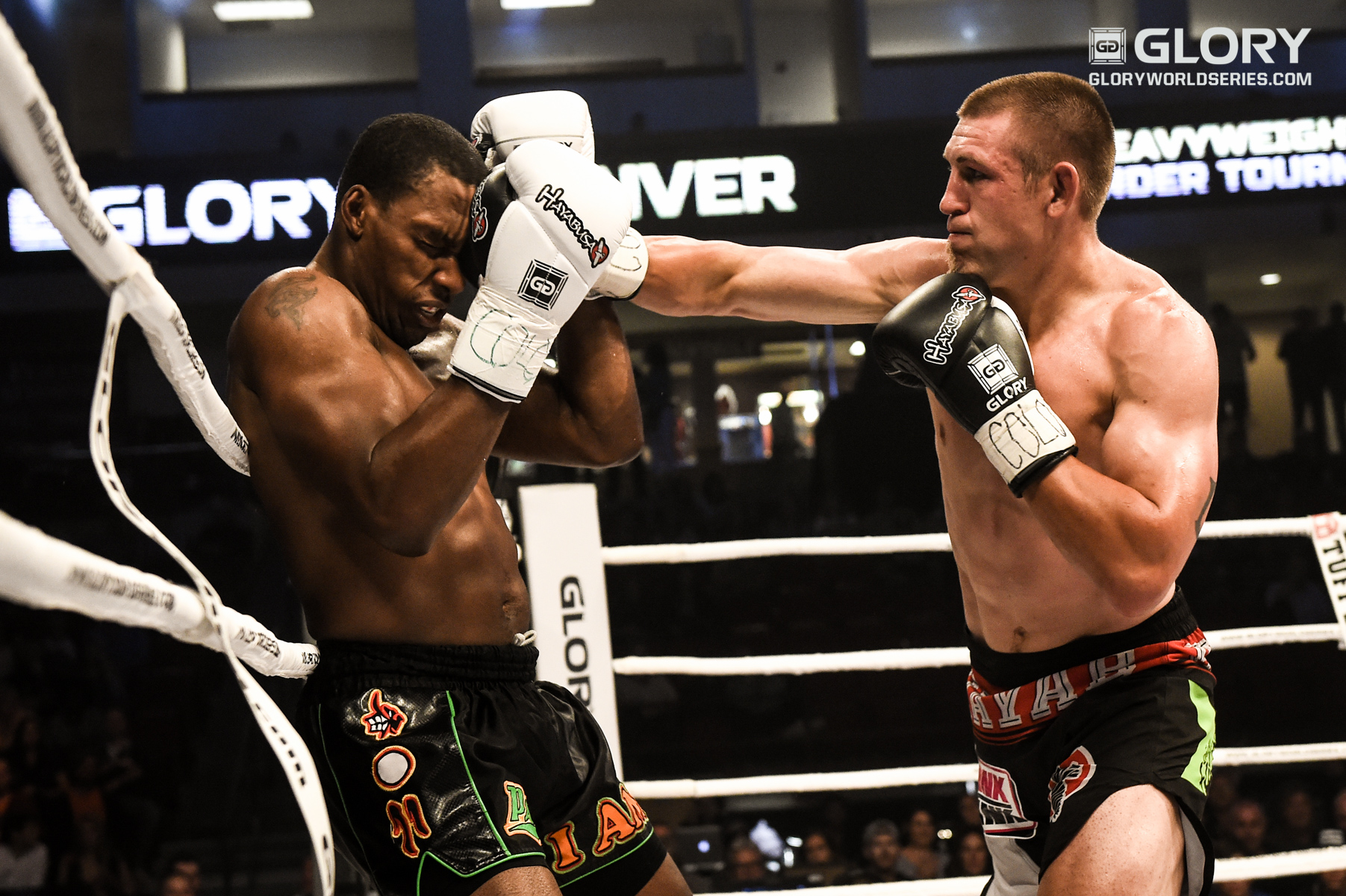 Is it ever possible to be too young to be the best? Of course it is. Many of the best martial artists will tell you that no matter how old or experienced they are, there is always room for improvement. In fact, Grandmaster Helio Gracie, co-founder of Brazilian Jiu-Jitsu, wore a blue belt, in part, to show he would always be a student of his family’s art.

Some martial artists get way ahead of themselves, though. Often, it is out of arrogance or overconfidence, but sometimes athletes move up the rankings too quickly based on raw talent and early success.

For newer fans of MMA that have no knowledge of pro kickboxing, Dustin “The Hanyak” Jacoby may not be a familiar name. The Colorado native, who grew up in Illinois, entered the professional MMA arena over eight years ago. He started his career with a dazzling six stoppage wins in a 10-month period. That’s not a bad way to kick off a career. However, he was only 22 to 23 years old at the time.

“It’s been crazy, because I got onto the scene so quick,” Jacoby told Combat Press. “I turned pro in November 2010 — my kickboxing career started in the middle of my pro MMA career — and by October 2011, I was fighting in the UFC. I had never been taken down. I had never thrown an elbow. There was just so much experiences and battles that I hadn’t been through.”

Jacoby made his UFC debut at UFC 137, only 11 months into his pro career. He lost back-to-back fights to Clifford Starks and his future teammate Chris Camozzi. This led to his subsequent release from the promotion. He just wasn’t ready.

“Once I got cut, I won a couple more MMA fights. I had an opportunity with World Series of Fighting, had an opportunity with Titan FC, Bellator, and that was all kind of in the middle of a GLORY Kickboxing career,” Jacoby reminisced. “I think the biggest gains of my career was when I did sign with GLORY, and I started doing all stand-up. It taught me how to fight. It taught me how to go through tough battles with great athletes and superior strikers.”

By January 2015, Jacoby decided to step back from MMA for a while. His early 6-0 record had extended into a 10-5 mark, and he was coming off a couple losses in Bellator. Meanwhile, he was facing some of the best strikers in the world with GLORY. He also decided to make the move back to his home state of Colorado to train with Camozzi at Factory X Muay Thai.

In August of the same year, Jacoby started to find a lot of success in the GLORY ring. He went on a five-fight winning streak that ended with a middleweight title win in Chicago. However, in the back of his mind, he always planned to make a return to MMA. The gym he had made home was growing rapidly, with many pro fighters finding a lot of success in MMA.

“It’s funny,” Jacoby said. “The past four or five years, since I moved back to Colorado, have flown by. I feel like yesterday was 2015, and I just started making my rise in GLORY, and I won five fights in a row and [was] fighting for a world title. I look back at all of that experience and all those fights, and I’m still 30 years old. I wasn’t ready when I was in MMA the first time. But, now, with GLORY and all the battles I have been through, I know I’m more than ready.

“To be honest, I love kickboxing. I enjoy kickboxing more than MMA. The reason I want to switch back over [is that] I had the couple unfortunate arm breaks. Dude, 20 fights in GLORY, and my body took a beating. I remember, after I broke my arm that second time, I helped Stipe [Miocic] coach The Ultimate Fighter, and came back and got a staph infection, and I couldn’t get through a training session without my arm bothering me. I just took all that time off. When I came back, I said I’m going back to MMA. I was helping Anthony [Smith] get ready for that Jon Jones fight, and I fell in love with the jiu-jitsu again, the rolling around, and just MMA striking. I have some unfinished business in MMA.”

It’s hard to think that Jacoby, with such a long and storied career, is still so young. He got an early start, like his training partner Smith, and he likely has not even reached his prime yet. Since he was last in the UFC, Jacoby has become a completely different fighter.

“I’m just looking to get back to my old roots,” said Jacoby. “When I first got into MMA, I was knocking everybody out. That’s why I got to the UFC so quick. You know, my fourth, fifth and sixth pro fights, I was fighting guys who were 12-3, 14-5. They were the guys who were on the cusp of getting into the UFC, and I knocked them out. I got to the UFC, and I had some injuries my first fight, and the second battle with Chris was a tough battle. Guys were just wrestling me, and so I moved on after the UFC, but I wasn’t fully prepared, man.

“I really feel that GLORY — going toe-to-toe with foreign guys and the best stand-up strikers in the world — really taught me how to fight. When I was in MMA, I started thinking too much about takedowns and jiu-jitsu, and I wasn’t focused on myself to go out there and just put it on them.”

After Jacoby suffered some injuries, he finally decided it was time to make the foray back into MMA. He let his coach and manager know he was ready to transition back in, but not many people were jumping at the chance to fight such a dangerous opponent. However, on less than two weeks’ notice, he found out he would be fighting for Midwest Championship Fighting on Saturday, March 23, in Western Nebraska.

“I knew there was a chance, but, apparently, my manager was telling me it was just kind of hard to get me a fight, because no one wanted to fight me,” Jacoby said. “I didn’t really like hearing that. I knew there was somebody that wanted to take it, so I’m glad it finally happened.”

At MCF 17, Jacoby meets fellow Bellator veteran Matt Foster at light heavyweight. While, historically, Jacoby has fought at middleweight, many MMA fighters have recently found a lot of success fighting closer to their natural weight. In fact, teammates Camozzi and Smith have both done so recently at 205 pounds. Foster has gone as low as middleweight and as high as heavyweight, but he will have a significant size disadvantage to Jacoby, who is four inches taller with a whopping six-inch reach advantage.

“I looked at the guys he’s fought, and I’m familiar with some of those guys,” Jacoby said. “He’s lost to some guys I know I would destroy, and he’s fought a couple ex-teammates of mine and lost to them. You know what? I’m just focused on myself, and he’s going to feel the heat. I’m coming in to fight.”

Jacoby has a much bigger goal in mind, too. He is focused on getting back to where he was several years ago.

“I’ve been told by my management team and coach that if I go out and get a win in exciting fashion, I’ll be in this second [Professional Fighters League] tournament this year,” said the MMA and kickboxing veteran. “That’s what my eyes are on. I would love to go in there and get a chance to be the PFL champ and get that prize of $1 million. I also know I could get this win, and maybe one or two more, and be back in the UFC.”

Regardless of what’s next for Jacoby, the first stop is the D&N Event Center in North Platte, Neb. He is excited to be back in the cage, participating in the sport he knows he was meant to excel in. The new version of Jacoby will certainly be the best yet.

“I think, now, the 2.0 version is a guy that’s been to the bottom, that’s suffered, that’s climbed to the top, [and] knows what it feels like,” said Jacoby. “I’ve always wanted to be the best. There’s nobody I’ve fought that I can say is a better athlete than me. I’m one of the best athletes in the fight game. It’s just about me going out there and putting it all together.

“I feel like I belong at the top. I’m ready to fight these tough guys. I had a layoff from MMA, but I was right there at the top. I’ve been through all that experience, and I feel ready to fight the top guys. If I have to go get a win in a small promotion to show these guys I’m still relevant and still in the mix, that’s what I have to do, man. I’m not particularly happy about it, but at the same time, it’s an opportunity to go out and remind the fans who the Hanyak is.”

Jacoby would like to thank all of his coaches and teammates at Factory X Muay Thai and Landow Performance, his manager Jim Walter, and all of his family, friends, fans and sponsors. Follow Dustin on Twitter: @dustinjacobyDJ
Advertisement