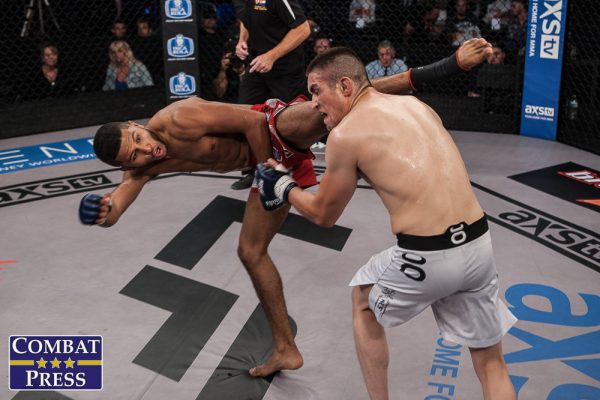 The American dream. It’s a concept that has become almost cliché for people who were born and raised in the United States. In the day and age of social media, pretty much everything has become cliché. However, for many folks, the American dream is still a very real thing, and it has actually become a very polarizing topic in politics.

While growing up in Morocco, Youssef Zalal didn’t really have an American dream, per se. In his hometown of Casablanca, there weren’t a lot of choices, and the idea of growing up to be whatever you want to be was not something that was regularly talked about.

“It’s a whole lot different than the United States,” Zalal told Combat Press. “Where I grew up, you either have sports and school or school and trouble. It was one of those, and you had to pick something. So, my mom put me into kickboxing classes when I was 11. All I did was school, kickboxing, school, kickboxing, and that’s all I did every day for two years.”

Zalal’s family did a great job of focusing their son in the right direction. They certainly didn’t want him to take the other route. Whether or not they realized it, they had sent a really talented young man down a defined path to his future.

“I had my first fight a year in, when I was 12,” Zalal said. “I loved it, and I stuck with it. Then, when I came here, I focused on speaking English, and I didn’t even know MMA existed until I came here. I went into a gym that was next to my apartment complex, and it was American Top Team for Colorado, run by Bobby Lashley. I started doing jiu-jitsu classes, and it was weird for the first few weeks, but I got the hang of it. I started loving it, and got an MMA fight when I was 18.”

Zalal was 13 when his family crossed the pond. MMA became his American dream. His family settled into Aurora, Colo., and Zalal eventually moved from American Top Team Altitude to Factory X Muay Thai in Englewood under the tutelage of Marc Montoya. He is now 3-0, all by finish, in just his first two months as a pro. He may have a background in kickboxing, but two of those three wins came via submission.

Some of Zalal’s dreams have already transformed into fantastic memories. In September, he debuted for the Legacy Fighting Alliance on what had to be a record time for short-notice appearances. Then, in his last fight, he stepped in to face a nine-fight veteran grappler. Zalal forced that opponent to tap out in the second round.

“In my last fight, I felt amazing,” said Zalal. “I was going against a jiu-jitsu guy; a lanky guy. We had to come out with a whole different game plan from usual. Coach always says to go out there and have fun, and that’s what I did. I finished that kid, and he was 7-2, never been finished. I just stuck to my game plan. Some people think I’m just a striker, but some things come out of nowhere.”

For a guy who opened his career with three fights in two months, a five-month layoff might seem like an eternity. However, it has just given Zalal time to fine-tune his game in a sport where he feels like a complete rookie.

The layoff comes to a halt on Friday night, though. Zalal is set to clash with Colorado native Joey Banks at Paramount MMA: Contenders at the National Western Complex in Denver.

Banks may only have six pro fights, but he is a veteran of the sport. He has a history of training at some of the top gyms in the Denver area. Banks went 3-1 as a pro — all his wins were first-round finishes — before taking a three and a half year hiatus. He returned a year ago with a submission loss, only to turn it around with a spinning-backfist knockout win at Paramount MMA 8 in October.

“I think it’s a great fight for me,” Zalal said of his match-up with Banks. “He throws some heat for sure. I kind of love that. The game plan is going to be the same thing. I’m not going to play these guys’ games. I’m going to play my game. They will find out who hits harder and who does all this better.”

Paramount MMA is a great stage for up-and-comers like Zalal and his teammates who are fighting for the promotion as well. With former UFC fighter Tony Sims at the helm, the promotion is very focused on doing right by the fighters, which is an American dream in and of itself.

“This promotion’s awesome, man,” Zalal said. “Tony Sims — he’s an awesome dude. He used to fight, so he takes care of the fighters and stuff like that. It’s really exciting for me to be in the co-main [event]. I love it. I love being in the big lights.”

Zalal is still young in his career, but, while memories are being made, the dream will never die. When he was growing up in Casablanca, he only knew two things: school and kickboxing. Now, that he is pursuing the American dream, he is still focused on learning and fighting, but he’s also making a little money along the way. It’s all in pursuit of his ultimate dream.

“My American dream is to get the world championship belt,” said Zalal. “My number-one goal is to be in the UFC. Right now, I need to just climb the ladder slowly. I’m going to put on a show. Fight to be finished. That’s what the fans want.”

Zalal would like to thank all of his coaches and training partners at Factory X and Landow Performance, his family, friends, fans, girlfriend, and sponsors: Denver Chiropractic, Receptra Naturals, Rackfest, and Lockton. Follow Zalal on Twitter: @themorccandevil and Instagram: @themoroccandevil
Advertisement