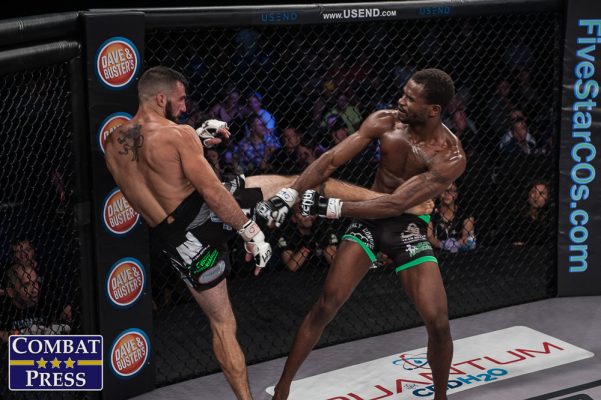 Focus is a very powerful thing. It doesn’t matter what endeavor someone embarks on, or what goals they have, focus can make or break success. However, problems arise when focus shifts to obsession, hence the idea of work-life balance.

In sports, the line between focus and obsession can easily blur. Nobody wants to be driving a car at 200 miles per hour or ski-jumping 800 feet through thin air and suddenly lose focus, because that could mean death. However, obsession can have an equivalent effect, as it crosses into the point of diminishing returns. Some athletes have figured out that they need to spend as much time getting their minds right as they do to get their bodies right. Up-and-coming featherweight MMA fighter Derek Brenon has utilized his time in Colorado to work on this exact goal.

“I do a lot of meditation,” Brenon told Combat Press. “I like to go up in the mountains with my dog. He’s a German Shepherd, so he’s full of energy. I like going outside, soaking up the sun, and soaking this whole journey in. I came from New York, and now I’m out here. I fought on TV for [Legacy Fighting Alliance] once, and that got me a lot of exposure, which has always been a dream. I’m grateful to be in the shoes that I’m in and being able to do the things I’m doing.”

Part of every fight camp is to train properly, so the fighter can “peak” at the right time. Peak too late, and you miss the boat. Peak too early, and you get stale. This is why most fighters prefer camps that are eight to 10 weeks long. This window allows just enough time to fine-tune performance and cut weight to come out in prime form.

Brenon has had his fair share of long camps in the last year. For his last fight, he waited for what seemed like forever to fight Justin Gonzalez for the Sparta Combat League featherweight title. Originally slated to meet last summer, the two didn’t square off until November. Brenon suffered his first pro defeat by fourth-round knockout.

“My biggest takeaway was to not overthink things,” he admitted. “That was the 12-week fight camp, and I thought about that fight every single day. By the time I got to that fight, I was so mentally drained that I was just glad to be there, and I just wanted to get it over with. I was kind of burnt out a little bit. As I progress in my career, I’m going to be more comfortable with these fights and these longer fight camps. I just need to not think about it so much, and just go out there and do what I do best.”

Originally from New York, Brenon moved to Colorado early last year to further his career as a pro fighter. In 2017 alone, he pulled off two wins and suffered the aforementioned loss in just eight months’ time. The move to Factory X Muay Thai in Englewood came with the help of a friend. Brenon is now clicking on all cylinders.

“I love it out here,” Brenon said. “The training at elevation is the reason I wanted to come out here to Colorado. Before I moved here, I was living down in Florida [and] training at American Top Team down there. I just felt that I was going to get a better overall training team out here with Factory X, the elevation, and Landow Performance. I’m super happy with my decision to move out here when I did.”

In addition to the training, Brenon has been able to find quite a few high-level opponents to face. His next foe is arguably his toughest yet. On Friday night, at Paramount MMA: Contenders, which takes place at the National Western Complex in Denver, Brenon faces undefeated Texas native Jake Heffernan, who fights out of Gracie Barra The Woodlands in the Houston area.

Paramount MMA is a Denver-based promotion spearheaded by former UFC fighter Tony Sims and his partners. Fighters appreciate working with a fellow fighter, because the perspective is different. Sims knows what it’s like to train too long or too short, and he tries to make good match-ups in a reasonable amount of time.

“Paramount is an awesome promotion,” Brenon said. “They are a promotion that puts the fighters first. Tony Sims is a fighter himself, and he really understands where we’re coming from. He tries to take care of the fighters, while putting on a good show, so I love them. Hopefully, after I get that win on the 16th, I’ll get that title shot I’ve been looking for with them.”

A win is no small order, though. Heffernan is 5-0 as a pro, and all of his fights have taken place on the local Fury FC circuit in his hometown, which has been a bigger stage in Texas for some time now. One thing that could have worked against Brenon going into this one was that it got postponed over a month.

“I’ve taken a few weeks off throughout this fight camp,” Brenon said. “This fight was scheduled for February 9 and then it got postponed, so I took a week off to get my mind to relax and my body some time off. I trust my coaches, and I’m going to be peaking at the right time. Instead of focusing on what he does, I’ve just been focusing on trying to develop my game more.

“Honestly, I haven’t looked up too much on him. I know he’s undefeated. I know he’s a tough opponent, but I’m letting my coaches worry about that. Like I said, what I took away from my last fight was to not think about it. I just need to show up on fight night, have some fun, and do what I love doing.”

Hindsight is 20/20, right? Well, for Brenon, his last loss could have been a win had he carried the same mentality into that one as he is into his next one. No fighter likes to lose, and the first one is often the worst, so it’s no surprise that Brenon still has Gonzalez in the back of his mind.

For now, Brenon is focused — but not too focused — on the task at hand. He’s out to beat Heffernan in the main event of Paramount MMA: Contenders. It’s been a long road from New York to Florida and then on to Colorado, but he is now grounded both physically and mentally. On Friday night, he will be ready to peak and move one step closer to a title shot.