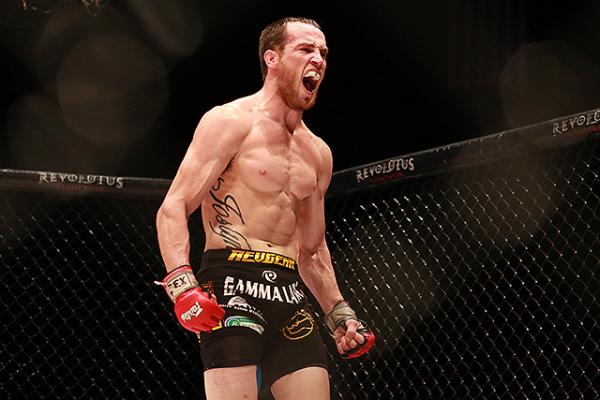 Nicknames are everything in sports. If you have a cool one, then your reputation can precede you and give you an advantage before you ever step onto the field of battle. Who can forget such cool nicknames as “Megatron,” “The Worm,” “The Iron Horse,” or “The Leech”?

That last one might take you by surprise, but it shouldn’t. It belongs to Legacy Fighting Alliance lightweight Damon Jackson, and it came about during his days growing up and wrestling in his native Missouri, where he became an All-American.

“It came from the time spent on top controlling people when you’re wrestling,” Jackson told Combat Press. “We had a heavyweight wrestler there one day and no one wanted to roll around with him. So I just jumped on his back as a joke, and one of my friends said I looked like a leech, and it stuck.”

It was not Jackson’s first choice for a nickname. He briefly adopted the moniker “Cadillac” and also wanted to go by “The Answer,” before learning it was already being used by the UFC’s Frankie Edgar.

Jackson, whose records stands at 13-2-1, parlayed his background in wrestling into an MMA career after he started watching the first season of The Ultimate Fighter in high school. He made his amateur debut in 2009 and compiled a 6-1 record before turning pro in 2012. After competing on the regional circuit, including in the former Legacy Fighting Championship promotion, and twice for Bellator MMA, Jackson was offered a short-notice fight against Yancy Medeiros at UFC 177 in 2014.

Jackson suffered a submission loss to Medeiros, and it was followed by a no-decision against Rony Jason and a majority draw against Levan Makashvili. The lack of wins led to Jackson’s UFC release.

“It made me learn to have more confidence,” Jackson said. “I didn’t feel at the time that I should have been there. I was offered a last-minute fight, which meant they weren’t looking for me, but I was ready to step in — you can’t turn that down. I learned from it and now I see guys who don’t look like they want to fight, and it’s frustrating.

“I would fight monthly if my body allowed me to. But the UFC has so many guys now that I know they don’t give many second opportunities.”

Jackson returned to Legacy FC after his stint in the UFC. Eventually, Legacy combined with the Resurrection Fighting Alliance to become the LFA. Jackson has fought for the organization ever since, compiling an overall record of 4-1 in the promotion.

“LFA is great,” he said. “I get to fight in my hometown, and I get to fight every two to three months. They handle their business and take care of everything. You just have to show up and fight. You get good exposure on AXS TV, which helps with your sponsors.”

Jackson has competed at both featherweight and lightweight in the LFA and elsewhere. While he described cutting to 145 pounds as “hard,” especially for short-notice fights, he can usually make both either weight limit with enough preparation.

“I walk around at a little less than 170 pounds, so it makes the cut to 155 easy,” Jackson said, adding that the issue of weight cutting should revolve more around the fighters.

“I’ve worked with boxers, and they only cut five or six pounds because of the fear of brain damage and more long-term damage from dehydration,” Jackson said. “Fighters have to understand the long-term risk and think smarter about their weight. No one organization can change it. People know how to cheat and get around it. I know guys in the UFC who still use IVs to rehydrate.”

“I’m going to go forward and look for the finish on the feet or on the ground,” said Jackson. “I always punch to take down, and I’ve been putting more effort into my boxing in the last four to five months. I’m starting to piece it all together and set everything up how I want it to be.”

Jackson has considered a life after fighting, too. While he isn’t giving himself a hard deadline, he sees himself possibly competing a couple more years and calling it a career around the age of 31.

“I’m giving myself a limit, because I don’t want six to seven years to go by and I have a goal that I know I can’t have,” Jackson said. “I’ll take a step back and reassess my career. I’d like to compete in Ironman competitions, and I’m going to compete until I’m no longer able to. I like competing and I like to win.”

Jackson hopes to keep passing on his competitive desire to his four daughters, who range in age from nearly one year old to eight and have already started to follow in their father’s footsteps.

“I catch crap every single day,” Jackson said with a laugh. “But I just laugh at them and try not to be too hard on them.”