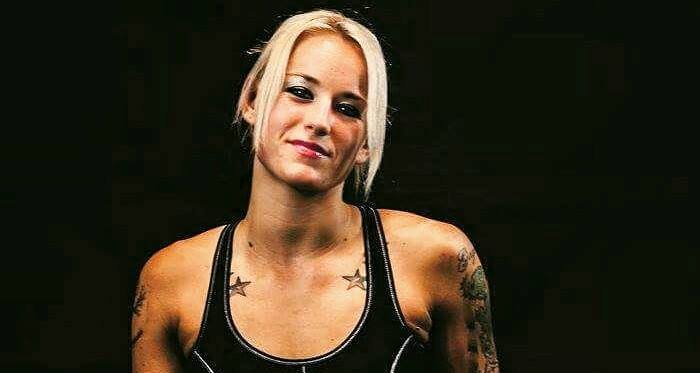 The best laid plans of mice and men… Sometimes things happen and plans get derailed. Actually, most of the time it feels that way.

In an MMA fight, you’ve got to be prepared for anything to happen. The submission artist can get tapped. The technical striker can get caught. It’s one of the things that makes the sport so great. MMA mirrors life.

Jessica “The Black Widow” Borga had planned on becoming a pro MMA fighter six years ago. After years of watching the UFC and dreaming about being a fighter, Borga was urged by one of her friends to go to Champions MMA in Lakeland, Fla. She was ready to dedicate herself to the sport and see where it took her.

“When I was younger, my brother was killed in a car accident,” Borga told Combat Press. “My father had been in law enforcement and was the first responder on the scene. It was rough on all of us. I had always been the tomboy and daddy’s girl, but after that it… It was hard on all of us. My dad died early, only 43. I was on the wrong path and doing things I shouldn’t. MMA actually is my savior.

“My dad taught me how to fight when I was little. He would like to practice self-defense techniques and teach me at the same time. After my brother died, I continued being the tomboy for my dad. After my dad died, I knew it was time to make a change. And that is when I found Champions MMA and coach Ross [Kellin].

“But about a month into training, I found out I was pregnant. My son and my dad changed me. I could’ve ended up in prison.”

Motherhood and all that goes along with it kept Borga out of the gym for a few years, but the dream never died. About a year ago, Borga decided it was time. She trains, works and “mothers,” all full-time.

“I train six days a week, sometimes twice a day,” she added. “I do it because I have a passion for the sport. It’s time for me to do what I planned on doing years ago.

“I do it for me, my dad and my son. My son is my biggest fan. He motivates me and I want to show him that sometimes you have to make sacrifices — sometimes you can’t do what you want to do in favor of the bigger thing you want to do. It’s tough because I want to spend more time with him, but I am also teaching him by example to go for his dreams. His dad works out of town during the week, so it’s like being a single mom. But it’s all worth it.”

Borga has taken the Florida scene by storm in a short time. She competes in grappling tournaments and admits to being more nervous in between rounds there than in the cage.

“I don’t know why, but when I step in the cage it just feels right,” she explained.

She has been right as rain, so far. Her first amateur fight ended in 14 seconds by knockout. That was in July. Her second fight went a little longer. After Borga scored two knockdowns, the fight was called at 2:28 in the first round.

“[Brianna Leahy’s coaches and fans] got upset at the stoppage,” said Borga, whose next fight comes against Caitlin Sammons at Breakthrough MMA 18 on Nov. 7. “No one wants to win with controversy, but I think the call was right. It happens a lot in MMA, and fighter safety is key. She is a very good fighter and very technical in her stand-up. Her Muay Thai is very good. Like I said, she is a very good opponent and I wouldn’t mind fighting her again. I think, though, that if you watch the video you’ll see it was a good stoppage.

“I’ve been lucky to have such good teachers and that I am catching on faster than expected. I have been training for a year and have two knockouts. I feel like there is a small window in MMA. I started training at 25. It’s time to make it happen.

“I wouldn’t mind showing that I can go three rounds, but I don’t mind taking as little damage as possible. I guess I don’t need to showcase all my skills, and I love being able to get the finish. Three rounds of three minutes is nothing compared to fight camp. It’s weird. I do get nervous, but not like I expected to. It just feels right and I love it. I love this sport — have I told you that? [laughs]

“I am preparing hard for [Sammons], but I don’t watch video. I prepare for the fight like I am fighting Ronda Rousey. I don’t care what their record is, I view them as the best. I never want to underestimate anyone because there is always a chance in MMA. My coach watches the fights and trains me to be ready, but it’s hard to know what either of us is capable of. There isn’t enough to know yet. I mean, I come from a jiu-jitsu camp, but haven’t been able to show my ground game yet.

“I actually think she might go for the takedown this fight, and I would like that. The more knockouts I score, the more folks will want to test my skills on the floor. But I don’t go in with a game plan. You just train for whatever. Whatever happens, just keep hitting!

“I wasn’t a bad kid, but I wasn’t an angel. It’s awesome to me that now it’s legal to get in there and mix it up. I love it and it’s what I want to do all the time. Now I need to go in there and do it again and put on a good show.”

There are obstacles and roadblocks that will test your desire and try to derail your dreams. Your fire might even need to be kindled again. But with a lot of hard work and a little luck, you can do anything you want, if you believe in it. Borga wants everyone to know that dreams delayed are sweeter. Dreams that require big sacrifices offer big rewards. Plus, in MMA, you get to hit people legally.

Jessica would really like to thank her boyfriend, Gavin, and their son, Gage, for all their support and love. She adds, “No one wants to be around a woman who is PMSing, but PMSing and cutting weight? It takes a special person to want to deal with that. Gavin is a keeper. We’ve had our bumps in the road and sometimes it’s hard. With kids, they either bring you closer together or push you apart.” Jessica would also like to thank her sponsor, Dr. Johnson of the Chiropractic Center of Lakeland, and coach Ross Kellin and all her teammates at Champions MMA. She would also like to thank her fans, especially the ones who travel to see her compete. Follow Borga on Twitter: @blackwidowborga
Advertisement