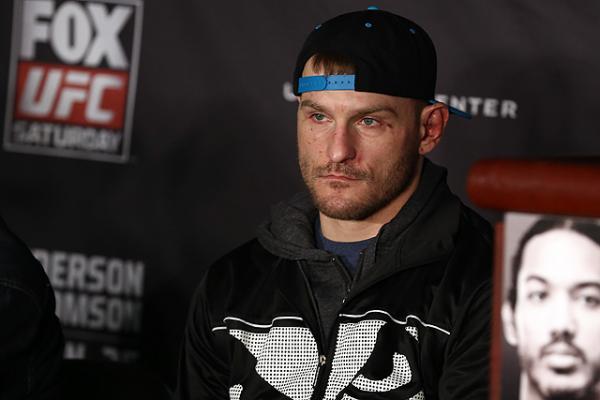 Stipe Miocic Can Create a Legacy at UFC 211

Stipe Miocic has one thing on his mind: winning. The current UFC heavyweight champion maintains this same victory-driven focus as he prepares to fight Junior dos Santos in a title defense at this weekend’s UFC 211 card. Dos Santos was the last person to defeat Miocic in what is considered one of the best heavyweight fights of all time. Now, Miocic has a shot at avenging his prior defeat.

Since their first fight, Miocic has gone on a four-fight winning streak. He’s beaten Mark Hunt, Andrei Arlovski, Fabricio Werdum and Alistair Overeem. He claimed the UFC strap with his win over Werdum, and he successfully defended the belt with his victory against Overeem. In his last three fights, Miocic has finished his opponents in the first round. He has made it clear that the title belongs to him. From the moment he demanded the shot after beating Arlovski to when he knocked out Werdum in Brazil while he was moving backwards, Miocic just shows up to fight.

After Miocic claimed the gold, the UFC put him back in his hometown of Cleveland to defend his title against Overeem. Although he was rocked and in trouble early, Miocic, like any good champion does, bounced back and got the first-round TKO victory with thousands of screaming fans showing their support at the Quicken Loans Arena.

While the heavyweight title has changed hands frequently, something seems different about the current “baddest man on the planet.” As his career has continued to trend upward, Miocic has grown as a fighter, Cleveland representative, face in the media and champion. It was going to take a special person and fighter to put a pay-per-view event in Cleveland, and the UFC knocked it out of the park with Miocic in the main event.

Leading up to UFC 211, revenge has been on Miocic’s mind and victory has been the focus word. Dos Santos is coming after what Miocic holds dear, but it’s another fight which means Miocic just wants another victory. It’s a mindset of knowing what you have and who’s coming for it, but it’s also about zoning in on how to get the victory. This is what makes Miocic a different breed.

Miocic doesn’t need the flashy outfits. He doesn’t need the headlines throughout social media. Miocic, who still works as a firefighter when he’s not competing in the Octagon, can relate as the “man’s man” for the way he goes about his business in the fight game while seeming like the one guy with whom you’d love to sit down and have a drink.

When both fighters step into the Octagon, plenty will be made about their classic first fight and how Miocic is out to get revenge. However, in his eyes, it’s just time to get another win. He may not focus on it, but with every media appearance, every time he represents Cleveland, and every time he fights in the Octagon, Miocic’s legacy grows.

He won’t talk about it, but Miocic is looking to break the trend in the heavyweight division where the belt doesn’t stay with one man for very long. With every devastating finish he provides, Miocic’s legacy continues to cement itself.