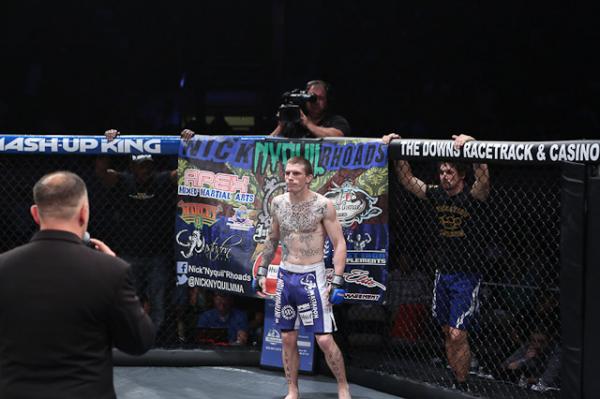 His nickname is “Nyquil,” but it’s not the fans that Paramount MMA featherweight Nick Rhoads wants to put to sleep.

“I’m an exciting fighter. You’re never going to get a boring fight out of me,” Rhoads told Combat Press. “All the guys I’ve fought have been a bunch of good dudes, so there are no tomato cans on my record.”

Rhoads’ next opponent is definitely no tomato can, either. He is scheduled to face Jarred Mercado, whose record stands at 14-4, for the inaugural Paramount MMA featherweight title on Friday, March 24, in Denver.

The 26-year-old Arizona native began sparring at age 12. He now splits his training between Arizona and Colorado, where he works under the tutelage of WEC and EliteXC veteran Thomas Denny, who compiled a record of 27-21-1 and faced competitors like Yves Edwards, Pat Miletich, Duane Ludwig, Nick Diaz and Georges St-Pierre.

“It helps when you can find good coaches like Tom, Ed West and Joey Rivera,” Rhoads said.

He has also been training with NCAA Division I wrestler Anthony Pike for his fight against Mercado, a fighter with a strong wrestling game.

“I’m happy to try and push the rumors aside that a wrestler can beat a stand-up guy,” said Rhoads. “I’ve won most of my fights by submission, so I’m not afraid to try and take a neck. But wrestling is a very small part of MMA. You can’t get punched in wrestling, but in MMA you can catch an elbow to the head just sitting there.”

Rhoads isn’t trying to put fans to sleep, that’s for sure. Mercado, on the other hand, better watch out or he might get a dose of “Nyquil.”