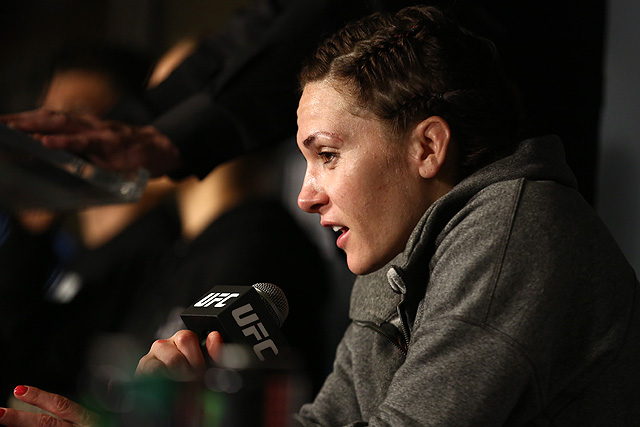 The Curious Case of Cat Zingano

Lost in the discussion of UFC women’s bantamweight champion Ronda Rousey’s dominant victory over Cat Zingano at UFC 184 last month was what comes next for Zingano. Given that she lost in 14 seconds, a rematch for Zingano seems highly unlikely. Or does it?

Rousey herself offered Zingano a rematch immediately after their bout and even admitted postfight that she felt bad for Zingano, which is unusual, to say the least, given how Rousey has acted after defeating previous opponents. Zingano has made her case for a rematch clear and is asking UFC President Dana White for guidance on how to get back in the title picture as soon as possible.

Right now, the challengers who can stake a claim for a title shot (in some kind of order) are Bethe Correia, Jessica Eye and Holly Holm.

Correia is ranked seventh in the UFC’s women’s bantamweight rankings and probably has the strongest case for a title shot, which still isn’t saying much. However, her claim to fame comes from battering Rousey’s “Four Horsewomen” teammates Jessamyn Duke and Shayna Baszler and calling out Rousey at every turn. Correia seems to have Rousey’s attention, and Rousey is willing to give Correia her title shot — in Correia’s home country of Brazil, no less.

Eye’s case for a title shot is even weaker. She has split her three fights in the UFC evenly — one win, one loss and one no-contest after her victory over Sarah Kaufman at UFC 166 was overturned due to a failed drug test. But that hasn’t deterred the sixth-ranked Eye from demanding a title shot of her own.

Holm, meanwhile, has the weakest case for a title shot. The highly decorated boxer has only one fight in the UFC. On the same card as Rousey’s victory over Zingano, Holm defeated Raquel Pennington in a bout she arguably should have she lost on the scorecards. Holm was visibly nervous as she entered the Octagon and continued to look that way throughout the fight. She was tentative, unwilling to engage with Pennington and displayed the hallmark of the training you sometimes find at the Jackson-Winkeljohn gym Holm trains out of — a willingness to settle for precision strikes and quickly backing away from an opponent. Holm is at least two victories away from a date with Rousey, if not more.

Of course, there’s always the elephant in the room. That elephant is a “superfight” against Cristiane “Cyborg” Justino. Cyborg and Rousey have been circling each other and calling each other out for the last few years. Cyborg is currently the Invicta FC featherweight champion and retained her title in impressive fashion the same weekend as Rousey retained her UFC strap.

Will a Rousey/Cyborg fight happen? I believe it will. There is too much money to be made and too much promotion that can go into the fight, given the bad blood the two fighters share.

Will it be Rousey’s next fight? Probably not, which brings us back to Zingano. Although she represented Rousey’s quickest victory to date, Zingano suffered from an awful strategy of immediately engaging with Rousey in hopes of gaining an advantage. That proved to be the wrong move, as Zingano quickly found herself trapped in another Rousey armbar. Given the benefit of hindsight, more training and a much better strategy, Zingano can still be Rousey’s toughest challenge to date. Plus, some media outlets believe Rousey/Zingano 2 might be the UFC’s best option right now, especially when you consider the resumes of the remaining challengers in the women’s bantamweight division and the uncertainty of a fight with Cyborg.

I would agree. The first Rousey/Zingano fight generated significant interest and promotion, and a rematch would do the same. Rarely do we see a rematch when one person defeated another so soundly the first time, but in the case of Rousey and Zingano, we can make an exception.