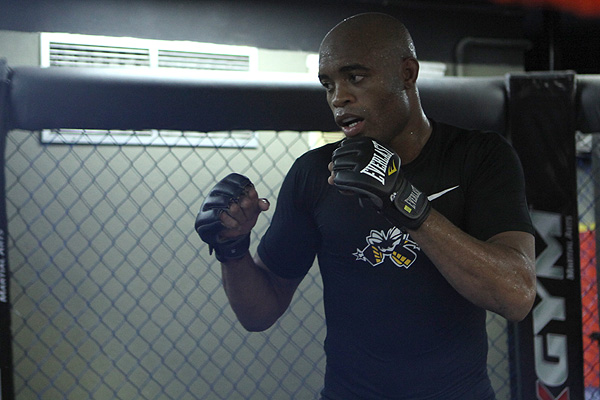 UFC 183: Can Anderson Silva Climb Back Up the Waterspout?

After more than a year away from the sport he dominated in a manner that often times left fans questioning whether or not he was human, Anderson “The Spider” Silva makes his return to the Octagon this Saturday against Nick Diaz at UFC 183. Like the spider of our nursery rhymes, Silva is attempting to climb the proverbial waterspout one more time after being washed out by the rain that was Chris Weidman. With Silva returning just three months shy of his 40th birthday, will he be able to ascend to the top of the UFC middleweight division once more? Or will age, injury and the mercurial Nick Diaz combine to wash “The Spider” out once again?

Roughly a year and a half ago, few things were certain in the world of mixed martial arts, but the fact that Silva never lost was one of those rare certainties. Not only did he win, but he won in a manner that often left fans feeling his bouts were unfair to his opponents. Remember all those cops Neo beat up in The Matrix? They sported similar looks of terror to those on the faces of Chael Sonnen and Stephan Bonnar before Silva finished both.

Before his first bout with Weidman in July 013, no one, including Silva, thought the outcome would be any different. Silva’s contempt in the ring could not have been clearer as he pretended to be hurt by several of Weidman’s punches. When Weidman finally did connect with a genuinely powerful punch, the seven-year reign of dominance over the middleweight and pound-for-pound rankings crashed to the canvas along with the semi-conscious Silva.

Fans and pundits cried fluke. They felt Silva had clearly not taken Weidman seriously and paid the price for his arrogance. It did not prove anything, they claimed. So, an immediate rematch was booked, and we all told ourselves the outcome would be much different. While most will remember the gruesome leg injury that ended the fight for Silva, what is forgotten is that Weidman was dominating the fight before Silva attempted to check his leg kick, thereby shattering his tibia and fibula. It marked two fights with disastrous results for the aura of an athlete that was equal parts confidence and skill.

Along with Weidman, it appeared as if Silva had found another opponent that he could not defeat: time. Silva was pushing his late thirties by the Weidman fights. Now? Silva will step into the Octagon just three months shy of his 40th birthday. The list of successful UFC athletes past the age of 40 is a very short one. MMA, like most sports, will always be a young man’s game. And while 40 might just be a number to some, there are several factors to consider that will multiply coupled with his age.

First, the human body simply does not bounce back from injury as easily as it did when we were younger. So, despite claims to the contrary, the leg injury is surely affecting Silva more than it would affect a younger fighter. Whether it be in terms of speed, strength or stamina, an injury that devastating has to take a toll on your body. It is also worth noting that Silva’s opponent, Diaz, is more than eight years younger than Silva. With the high-volume pace that Diaz likes to keep, Silva could quickly find himself feeling his age.

The other factor is what most would call the Chuck Liddell effect. Early in his career, Liddell had the ability to take a punch like few others. However, as time went on and knockouts like the one Silva experienced at the hands of Weidman began to pile up, Liddell’s chin quickly disappeared. Against a volume and power puncher like Diaz, Silva could end up a victim of a similar fate.

It should also be noted that Diaz wanted this fight. When was the last time anyone wanted to fight Silva? Most athletes treated it like a penalty, rather than something they sought out. Everything has changed since Silva’s two losses to Weidman. The sharks smell blood in the water, and they are beginning to circle, eager to take a piece of “The Spider” and thereby etch their name in the MMA history books.

When NBA legend Michael Jordan returned from retirement for the second time to play for the Washington Wizards, the greatest basketball player to ever live showed flashes of what earned him that title, but he never again duplicated the dominance he showed during his run with the Chicago Bulls. Silva’s return is likely to have the same result. While Silva is currently listed as a substantial favorite by the Vegas oddsmakers, those odds are most certainly based off the Silva of old, not the current Spider who is trying to make his way up the waterspout. On Saturday, we will be watching the greatest mixed martial artist of all time, but age, injury and a loss of his aura of invincibility will combine to wash the Spider out once more.