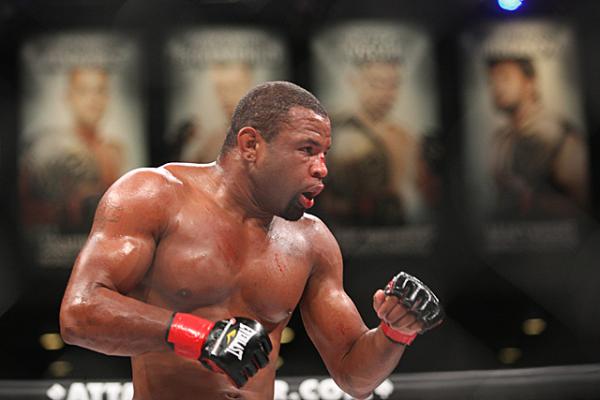 After a great night of fights at Bellator 123, Bellator MMA brings its act to the Compuware Arena in Plymouth, Mich., on Sept. 12 for its next event. Bellator 124 consists of a four-fight main card with a light heavyweight title fight, as well as the conclusion to the Summer Series light heavyweight tournament.

In the co-headliner of the night, undefeated Liam McGeary will take on Kelly Anundson to crown the light heavyweight tournament winner, who will get the next shot at the winner of the main event of the night.

WEC veteran L.C. Davis, who takes on Zeilton Rodrigues in a bantamweight fight, rounds out the card, along with a lightweight match-up between Ryan Couture and John Schulz.

The main event of the night is a head scratcher. Emanuel Newton puts his light heavyweight belt on the line against Joey Beltran, who somehow finagled his way into a title fight.

Newton is on a five-fight winning streak since his loss to Attila Vegh at Bellator 72. He even avenged that loss in his last outing at Bellator 113. Newton’s streak also includes two victories over Muhammed “King Mo” Lawal.

The 30-year-old is an interesting fighter who is very well-rounded. Just over his last five fights, his striking has been on display against Lawal, Vegh and Mikhail Zayats. If you’re looking for his grappling, look no further than his match-up with Atanas Djambazov at Bellator 85, where he was able to secure a rear-naked choke. Newton is very good at utilizing the cage wall and wearing down his opponents en route to setting up his takedowns. He will look to bring this fight to the ground to avoid Beltran’s only real chance for victory.

That chance comes in the form of Beltran’s hands. He has a ton of power—11 of his pro wins came via some form of knockout—and he is a brawler. Newton will have an even tougher time putting Beltran away, as the 32-year-old is tough as nails, a quality he demonstrated in his UFC fight with Pat Barry. Barry battered Beltran with leg shots the entire fight, but Beltran refused to go down.

There is no denying Beltran is a very tough fighter, but the fact remains that in his last 10 fights, he is 3-6 with one no-contest. He’ll be outmatched in every way by the champ. Newton takes the fight by decision or a submission in the championship rounds.

In the co-main event of the evening, Bellator 124 will bring a conclusion to the light heavyweight tournament from the Summer Series. The tourney final pits undefeated Liam McGeary against Kelly Anundson.

A former contestant on The Ultimate Fighter, Anundson will certainly look to take down yet another undefeated prospect in Bellator’s ranks. So far, Anundson has spoiled the perfect records of Volkan Oezdemir and Philipe Lins. He has a good wrestling base that will certainly help here against McGeary, who is more of a striker. Anundson also has a quality submission game to round out his overall grappling skills. The 30-year-old has five of his nine wins coming by submission, including a neck crank to submit Oezdemir at Bellator 115. Anything could go for Anundson and his bag of tricks.

McGeary should be ready for this fight. Like I’ve said in previous Bellator previews, he is a prospect to watch in Bellator. His last fight against Egidijus Valavicius was the longest fight in his Bellator career, and it lasted a whopping two minutes and 10 seconds. The 31-year-old is a finisher. Five fights into his Bellator career, he is certainly looking like the real thing. McGeary’s striking is there and he has the power to back it up, as evidenced by the five KO/TKO victories in his career. He earned two straight knockout victories over Mike Mucitelli and Beau Tribolet, respectively, in less than 30 seconds.

Anundson would be wise to use his wrestling base to take down McGeary. However, that’s easier said than done.

McGeary has only been past the first round twice in his career. Taking him into deep, uncharted waters may be the smart idea for Anundson. McGeary is going to come out aggressive in this fight, be wary of the takedown and land one punch to continue his streak of first-round knockout victories.

L.C. Davis makes his sophomore appearance for Bellator. This time, instead of taking part in an unaired prelim, he’ll be on the main card.

Davis takes on Zeilton Rodrigues, a product of the regional Brazilian circuit. Rodrigues is riding a six-fight winning streak. Training out of Nova Uniao, he certainly has the team around him to make him a force to be reckoned with. So far, out of his 12 wins, Rodrigues has notched 11 finishes, with six knockouts and five submissions.

Rodrigues showed he has power in his hands in his last fight, where he knocked out Claudio Rocha, a man who had previously not been finished, in the first round. The Brazilian also has four guillotine choke victories, and his ability to find the guillotine could come in handy against a wrestler like Davis.

Davis will most certainly look to drag this fight to the mat. If Rodrigues is going to get a guillotine while defending a takedown, he will have to look for Davis to make a mistake. Davis submitted Taurean Bogguess in his last fight at Bellator 113 with a guillotine choke right at the end of the first round, and he has heavy hands in the ground-and-pound department to complement his wrestling. He will be an absolute nightmare to deal with if he gets on top of Rodrigues.

Davis is perhaps known best for his early career in the IFL, a stint in the WEC and a fight with Michihiro Omigawa at Sengoku in 2009. The 33-year-old only has one loss in his last five fights, and it came against Ryan Roberts by way of a split decision. Davis is talented, and his wrestling will lead him to a decision victory.

Ryan Couture joins his father, Randy, over in Bellator for the first time in his MMA career. He’ll meet John Schulz in his promotional debut.

Couture is now two fights removed from his lackluster UFC stint, in which he suffered a TKO at the hands of Ross Pearson and dropped a decision to Al Iaquinta. Couture’s experience is definitely an advantage here. He has wins over K.J. Noons, Joe Duarte and Conor Heun in his Strikeforce run, but did not really show much in his UFC stint. The 32-year-old relies heavily on his grappling. He was a wrestler in high school and, of course, there’s the influence of his father, a talented wrestler himself. The younger Couture isn’t just a wrestler, though. He has earned four submission victories once he has put his opponents on the mat.

Schulz isn’t a Noons or an Iaquinta, but he is a finisher in his own right. None of his fights have gone to a decision and only two have gone past the first round. Schulz is a veteran of Bellator, where he has fought twice. However, he hasn’t appeared with the promotion since a first-round submission loss to Amir Khillah at Bellator 87.

Schulz is going to want to keep this fight standing and avoid Couture’s ground game, but it will inevitably get to the canvas. Couture’s wrestling and grappling has shown up when he isn’t fighting the big names.

This is another shot for Couture in the big leagues and in his debut for the No. 2 MMA promotion in the world. He will find a way to get a submission in the second round.