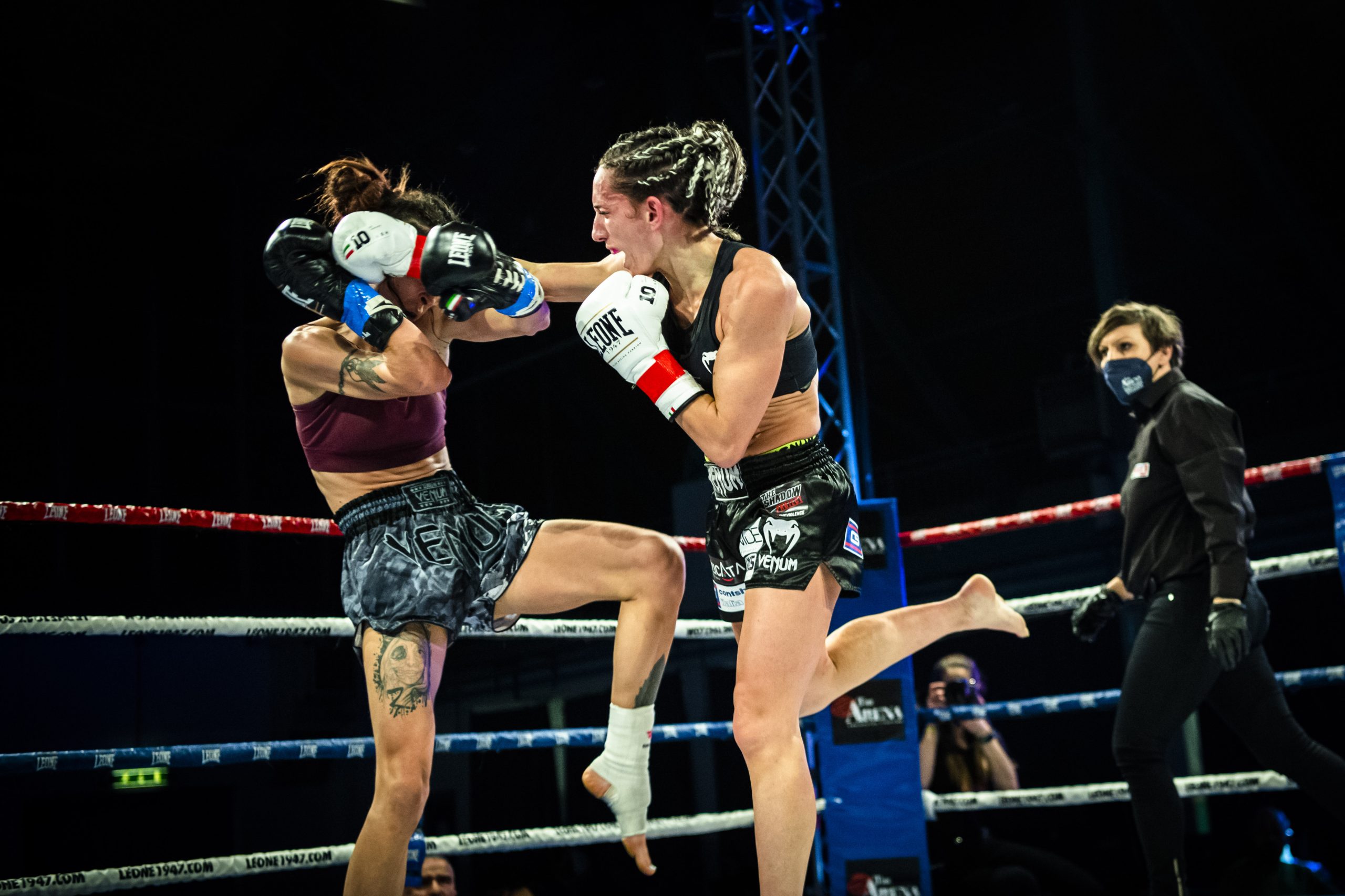 The Arena UF Results: Peritore and Gottardi Pick Up Belts

Last weekend, in Milan, The Arena UF was the first kickboxing event ever live streamed on Gazzetta, the top sports website in Italy. The data about viewers is undisclosed, but a member of the Gazzetta’s staff told Combat Press they were satisfied with the audience and quality of the fights. This was a an important result for combat sports in Italy, a country with a sports market interested in new sports, as soccer has always held a dominant position.

Headlining the event, Gloria “The Shadow” Peritore put on a great show and another belt on the wall. For the WKU Kickboxing world title in the –55 kg division (121 lbs.), she defeated Mariza Korogiannou by unanimous decision. The Greek nak muay tried to take advantage of her taller stature, but the Italian showed a perfect technique, keeping herself always at close distance and targeting the opponent with a lot of punches and some sharp back kicks to the liver.

The second title fight of the event was the ISKA European FCR Kickboxing championship in the –67 kg (148 lbs.) division. The French Gregoire Gottardi, a very well experienced nak muay, defeated by points the local star Nicolas “AK-47” Novati. Like in the Peritore Vs Korogiannou bout, one of the fighters was significantly better, but in this case, the French fighter wasn’t able to do the same as Peritore. At the end of the fight, it was Gottardi who came out on top over the aggressive Novati, representing The King Fight Club. The Arena UF was promoted by his coach Marco Re, but in spite of that, he had to face a very hard opponent to try to became the champion. We must say it’s not usual in this sport.

There was also the highly anticipated bout between Italy’s Jordan Valdinocci and France’s Morgan Adrar. Both were very experienced fighters, and Valdinocci is well-known around the world as a coach of several MMA fighters too. The bout was in kickboxing rules at -68 kg (150 lbs.), but, unfortunately, Adrar clinched for all three rounds making the fight not so spectacular. At the end, Valdinocci picked up the win by points, but all the fans, and he as well, were very disappointed with the French fighter.

In the other two international fights of the night, there was an easy victory by points for the young Thai fighter Yodpiti Petchrungruang, who showed perfect technique against the French Andrany Perrault in the –60 kg (132 lbs.) Muay Thai division. Also, Switzerland’s Hakim Bah bested Italy’s Gerardo Luperini, a former Lion Fight fighter, in Muay Thai at –70 kg (154 lbs.), with Luperini counted out in the second round.