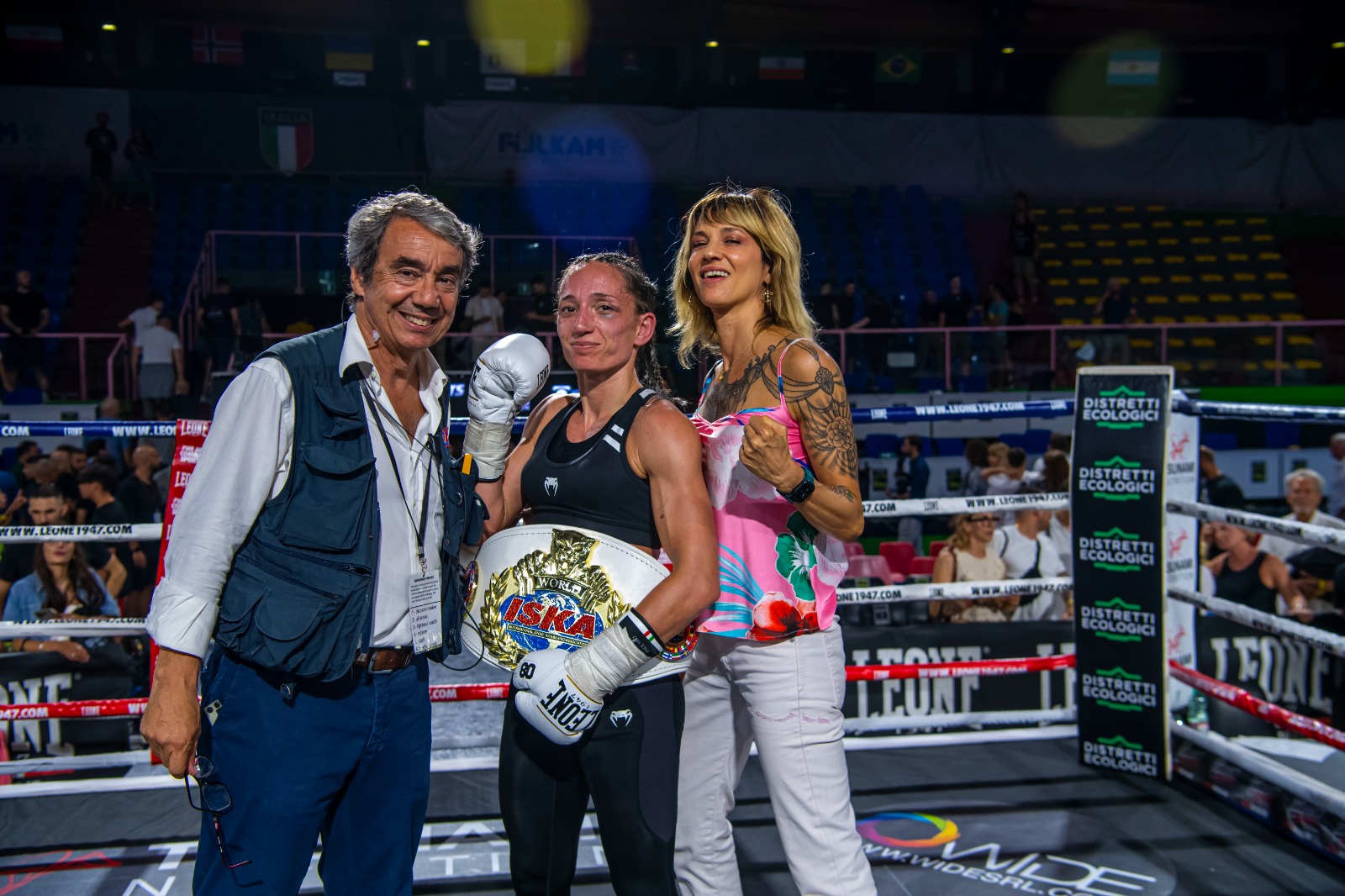 At the Pala Pellicone in Rome, Italy, the most anticipated bout of Superfights: Tsunami was supposed to be the challenge for the vacant ISKA K-1 rules world title in the -85 kg division, but the fans of the Roman fighter Mattia Faraoni got a nasty surprise. Prior to the bout with Charles Joyner, he suffered a medical cancellation

After the Valdinocci-Obregon fight earlier in the evening, Faraoni entered the ring and explained to an astonished crowd that, after a medical examination in a hospital, he was declared unfit to fight due to a possible cardiac illness. We hope to be able to give you more information in the next days. So, the co-main event was bumped up to the main event.

Italian champion Gloria Peritore took on Spain’s Mireia Garcia in an attempt to defend her -52 KG ISKA K-1 rules world title. After five rounds, the bout was declared a unanimous draw, and Peritore was able to retain her title. The Sicilian fighter, now based in Rome, is WKU world champ too. She’s nicknamed “The Shadow” like her project to support the women who are victims of violence.

Throughout the fight, Peritore was more active and used more techniques, including some sharp spinning high kicks. Garcia, on the other hand, spent a large part of the fight attempting to close the distance and tie up in the clinch. While unusual in a kickboxing bout, it was enough to break the rhythm of the fight. The final decision seemed correct, because the Spanish fighter was not able to overwhelm the champ. In the post-fight interview, Peritore said she was not satisfied with her performance.

The bout between Italy’s Hamza Imane and Spain’s Jesus Ariza also went the distance with Imane taking the unanimous decision. This was a comeback for Imane, a former ISKA world champion, after 3 years on the bench due to the COVID-19 pandemic and an injury. Ariza, on the other hand, had his last fight just a month ago. Imane dominated the fight showing he was in very good shape, and, as usual, a high level of technical skills, especially in boxing.

In keeping with the theme of the evening, Italy’s Roberto Oliva was defeated by Spain’s Vicent Garcia in a -63.5 kg bout that went the distance. The youngster Oliva is just 21 years old and was undefeated. He is also signed with the Muay Thai promotion Lion Fight and is the current ISKA -57 kg Intercontinental champion. He has now moved to the -63.5 kg division, targeting the world title.

Garcia is a multiple-time Spanish champion in Muay Thai and kickboxing, and he was overly confident at the press conference, declaring he was sure to get the victory. After just 80 seconds in the first round, he knocked down the Italian fighter with a perfect right punch. Oliva reacted well in the second stanza with both the fighters hitting hard, mostly with punches. In the third and crucial round, Garcia was very good in managing the distance and avoiding the strikes of the hometown fighter – a very interesting surprise for Spanish athlete.

Italy’s Jordan Valdinocci and Spain’s Guillermo Obregon went the distance in a -68 kg war, with Valdinocci coming out on all of the judges’ scorecards. Obregon validated his reputation of heavy hitter, staying aggressive versus the reigning WKU -67 kg world champion Valdinocci. The Spanish throwed more volume of strikes, but they weren’t as clean. Conversely, the Italian was sharper and got the decision in the end.

In the evening’s third bout, Italy’s Paolo Cannito took on the Frenchman Quentin Alhamadou, and the Italian took home the victory by unanimous decision. Cannito, who is only 20 years old, is already the WKU European champion, and he showed good boxing techniques facing the Thai style of the Nigerian-French opponent, who is IFMA European champion and two-time French national champion in Muay Thai.

In the second round and third rounds, Cannito struck hard, weakening his opponent, and resulting in the winner by unanimous decision.

The evening’s second bout was the only one that did not feature an Italian fighter. Ukraine’s Taras Hntachuk took on the U.K.’s Robert Zabitis (UK) in a -70 kg mathc-up, which resulted in a decision win for Hntachuk.

This bout was a clash of two heavy, but technical, hitters. Zabitis did not take advantage of his longer reach, as he closed the distance and mostly threw punches. The Milan-based Ukranian, a former Bellator Kickboxing fighter and WAKO Pro Intercontinental champion, secured victory after getting two knockdowns in the second stanza. The winner was awarded by the Italian Karate Kumite Olympic champion Luigi Busà, a friend of Mattia Faraoni, who talked about a possible debut in kickboxing. Busà is a WKF karate historic rival of Rafael Aghayev, a multiple-time world champion and Olympic silver medalist who also fights in the full-contact promotion Karate Combat.

The evening’s opening bout saw two Italians going to a draw when Renato Ferrara took on Andrea Storai in a -77 kg battle. It was a very technical fight between Ferrara, a former champ, and Storai, who won his last Superfights bout in April. All three judges decided the bout was a draw, but the bout was supposed to be an elimination match, with the loser getting a pink slip from Superfights. Fans will have to wait on a final decision.