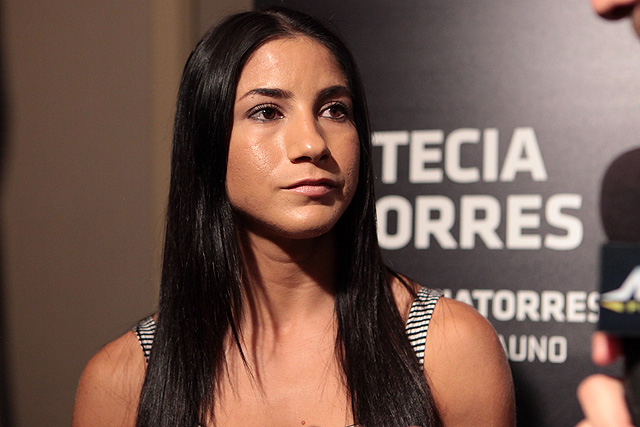 UFC 265 saw a little bit of everything from the women’s MMA side. There was a first-round armbar finish, a broken arm that wasn’t from an armbar and a fun, three-round battle. The armbar belonged to Jessica Penne, as she made short work of Karolina Kowalkiewicz. The broken arm belonged to Victoria Leonardo, who was not allowed to continue after the second round of her fight with Melissa Gatto. And the fight that saw the scorecards was a really fun bout between Tecia Torres and Angela Hill.

This fight was about one thing, could Gatto succeed if this fight was on the feet? On the ground, I felt she would have success whether she was on top or on bottom. She answered my question with a resounding yes. Gatto’s striking looked much improved since her last fight. The time away wasn’t ideal, but it served a purpose as she looked really good on the feet.

Round one showed us Gatto’s improved striking right away. She wasn’t getting flashy or anything, but she was landing hard straight punches. Leonardo, as I said in my preview, can be hit. She fell right back into lowering her hands when she kicked and made herself an easy target. Gatto was able to land punches at will. Leonardo was being hit, didn’t like it (who does?), and started moving backwards. This allowed Gatto to move into the next step of what she wanted, she got her clinch.

Gatto had the stronger clinch game, controlled it and then landed a beautiful trip takedown. The one mistake she made was being overly aggressive and it cost her position. But, as I said, Gatto is great off her back. She attacked with a kimura from the bottom. When fighters go for that, it is not because they are actually looking for a submission. That was the case her with Gatto. She used it to advance.

Fighters are going to react to the kimura grip and then, as Gatto did, use the reaction to determine where they are going next. Gatto used it to get the back of Leonardo. She didn’t get the submission, but she really frustrated Leonardo.

The second round was really just Gatto picking Leonardo apart on the feet. Upon watching it back, I am not sure as to when Leonardo’s arm got injured, but about a minute in I noticed her having trouble with the arm. This likely led to Leonardo thinking about the takedown later in the round.

I mostly want to talk about the stoppage here as opposed to what happened in the round. As fighters, if we are breathing, we think we can continue. If I was Leonardo, I would have wanted to continue. But I wasn’t Leonardo, I was watching as a fan. Judging as a spectator who knew what was happening and what was going to happen, it was absolutely the right call to stop the fight. There is no circumstance where that fight should have continued. You are talking about a broken bone. Not a hand, not a nose, a broken bone in the arm.

She was not going to be able to use that arm to properly defend herself. She would have been fighting with one arm and would have taken further damage to that arm. You couldn’t allow her to go back out there and take that risk.

What is next for Gatto? Maybe the winner of JJ Aldrich and Tracy Cortez?

Kowalkiewicz started out doing the right thing. She was circling from the outside and could have gotten the better of the striking if she could have kept Penne off of her. Penne was looking to do just what I said in the preview, punching her way into the clinch. But before any of that could really get going, Penne fell. Penne was inviting Kowalkiewicz down but common sense said Kowalkiewicz wouldn’t make that mistake right? Wrong!

Kowalkiewicz followed her down and got on top. That was a big mistake. Penne was able to tie her up, elevate and stand while keeping control and take her back down.

Let me detour for a moment and talk about that. MMA Twitter had so much fun with Dominick Cruz and Daniel Cormier arguing over whether that was a sweep. Daniel Cormier was correct, that is not a sweep. Part of why that was not a sweep is because Kowalkiewicz played a part in standing herself. Penne didn’t just force her up. Yes, Penne instigated it and kept control of it, but Kowalkiewicz was obliging. You can debate if it would been considered a sweep had it been all one fluid motion by Penne, but the way that happened, it was not a sweep.

Anyway, back to the fight. Once Penne got it back down, she then stood and landed some punches. Kowalkiewicz tried to grab on and go for a leg, but she should have used it as an escape. Instead, she attempted to get control and a submission, which was not going to happen against Penne. Shortly after Penne got the armbar and the win.

After all Penne has gone through, it’s nice to see her back and succeeding. At the same time, after five straight losses, you have to think this may be it for Kowalkiewicz. At least as far as the UFC is concerned. Kowalkiewicz is a great representative for women in MMA. She’s someone who is so easy to root for and you want to see succeed, but the last five fights have been tough to watch.

What is next for Penne? I think a fight between her and Mizuki Inoue could be really fun if Mizuki returns to strawweight.

This was a fun fight, as I expected. The thing with both Torres and Hill, whether you want to believe it or not, they are elite strikers. You can look at their lack of knockouts and say otherwise, but being an elite striker and having elite power are two entirely different things. They are not power punchers. They are elite strikers and both proved that even before they got into MMA.

In the first round, Torres came out looking great. She was landing nicely, moving well and mixing up her strikes. One thing I really loved was she would both begin and end combos with a leg kick. That can really complicate things for an opponent. You go low, go high and then go back low again. It can lead to confusion.

Her movement was really giving Hill trouble. Hill would come in and Torres would step back and start circling. Hill was doing the opposite. When Torres would come in with a flurry, Hill stayed there and kept her head in the center. As a result, she ate a lot of punches. Hill began trying to catch the kicks of Torres and looked to take it down. She was even successful on one of them, but didn’t do any damage with it.

This was opposite of what I expected, as I figured if it went to the ground, Torres would be the one to take it there. After they stood up from the takedown, Hill did land a couple nice strikes. But it was Torres doing the damage and taking the round for me.

Round two saw Torres get right back at it, landing and circling out. Hill was doing the right things, she wasn’t following. She was cut off the cage and trapped Torres. Hill wanted to clinch, where she does some of her best work. But the problem is that even when she did this, she couldn’t take advantage. When she trapped Torres in a small area, Torres used her speed advantage and would land before Hill and then get out.

At one point, Hill tied her up from behind but Torres was so much stronger and was able to break the grip. What do you do when you are able to get exactly what you want and still can’t have success? That was the problem facing Hill. She showed her toughness and her chin by taking hard shots and still coming forward. She just couldn’t keep up with the speed of Torres. I have watched every pro fight Torres has had and some of her amateur fights, and this was one of my favorite rounds I have ever seen her fight.

Round three was a lot like the first two rounds. Torres used her speed advantage to outland Hill. However, in this round, Hill had some success. She was able to trap Torres against the cage but this time, she kept a little more distance. By doing this, she was able to land before Torres because of her reach.

When they were in close, Torres could land first due to her speed. When Hill kept enough distance, she was able to get her punches there first. The problem was, she couldn’t sustain any big offensive momentum. Torres was able to get out and land. What Hill did do that I wish she had done more of is land on the way out. Hill didn’t let Torres get space until she landed something first. She made her pay for it. The round was the best of the fight for Hill, but I still gave the round to Torres and agreed with the 30-27 scores from the judges.

What is next for Torres? I think she needs to fight someone above her in the rankings. How about Xiaonan Yan?