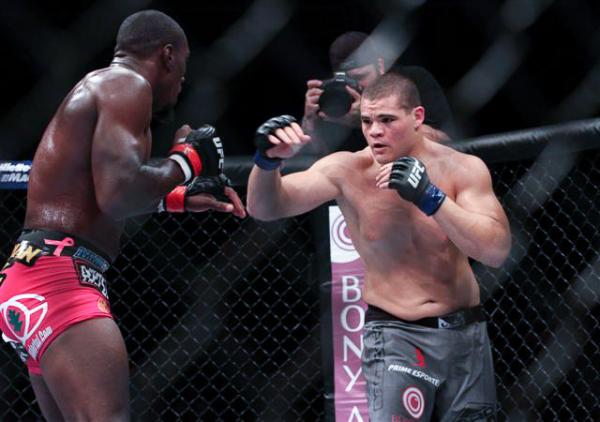 The Legacy Fighting Alliance has a special treat in store for its fans this weekend. The longtime feeder league for the UFC is headed to Brazil for a pair of shows this weekend. It starts on Friday with LFA 111. The card is loaded with prospects, including lightweight headliners Rangel “Anaconda” de Sá and Ismael “Marreta” Bonfim.

The 24-year-old de Sá has been competing as a professional since 2016. He won his first four fights before dropping a decision to Henrique Gomes. Anaconda responded to the setback by reeling off six straight wins while facing progressively more experienced and skilled fighters. His most recent fight lasted less than two minutes before he was rewarded with a slam knockout of Ary Santos to secure the Shooto Brazil 166-pound belt. Four wins in his current streak have come via first-round knockout, which brings his career tally to five victories via strikes and three by way of submission.

Bonfim is just one year older than de Sá, but he’s been competing for nearly five years more than Anaconda. Marreta got off to a much slower start, however. He won his 2011 debut, but he lost his next two contests. Marreta has only suffered one defeat in his subsequent 14 bouts, and it came at the hands of current UFCer Renato Moicano. He has eight knockout victories and three submission finishes.

Anaconda’s recent proficiency in scoring knockouts actually masks a well-rounded skill set. He has a slick ground game, and his guillotine choke actually led to the aforementioned Santos knocking himself out while trying to escape the hold. Meanwhile, Anaconda also applied heavy pressure on the ground against Tamyray Lacerda before timing a head kick just perfectly as Lacerda attempted to stand up in the last second of the opening frame of their contest. Anaconda has clearly shown himself to be a threat in every aspect of the fight game and during every tick of the clock.

Gomes was able to hand Anaconda his only recent setback by rocking him on the feet and controlling him on the mat. That’s not an easy feat to replicate. Marreta has the boxing and counter-striking ability to hang with Anaconda on the feet, but he might not be quite as strong in the takedown and wrestling departments. This one is likely to only go to the canvas if Anaconda opts to take it there.

Marreta is going to provide a tough fight for Anaconda. This is a guy who is equally as good at bringing an early end to his bouts, and his only loss in the last decade came to a man who is now a fixture in the UFC. Marreta should be able to use his superior boxing skills to land regularly on Anaconda, eventually leading to a knockout finish.

The Russian Cagefighting Championship promotion returns this weekend with the 14th edition of its Intro series. While there are numerous prospects on the docket, we’ll turn our attention to the clash between veteran light heavyweights Mikhail Ragozin and Wagner Prado.

The 29-year-old Ragozin has put together an increasingly impressive resume since his 2015 debut. While his amateur run included losses to current UFC fighter Magomed Ankalaev and recently crowned Bellator heavyweight champ Valentin Moldavsky, his pro turn kicked off with five straight stoppage wins and six straight victories overall. Ragozin then suffered a 69-second knockout loss to Wallyson Carvalho. He responded by scoring two TKO finishes. Ragozin’s next setback came against Brandon Halsey, but the defeat seemingly lit a fire under the Russian. He knocked out Joseph Henle in his next fight and went on to decision former Bellator champion Christian M’Pumbu. Next, he avenged the prior loss to Carvalho. He tasted defeat once more when he was narrowly edged out on the scorecards by fellow prospect Valery Myasnikov. The Fighter Gym export has recovered with six more victories, including a decision over Dana White’s Contender Series vet Leonadro Silva, while only dropping a split verdict to Yasubey Enomoto.

Prado represents another big name for Ragozin’s resume. The 33-year-old is a UFC veteran who has shared the Octagon with Phil Davis and Ildemar Alcantara, while also encountering future UFCers Johnny Walker and the aforementioned Ankalaev on the regional circuit. The Brazilian even managed to score a knockout of Walker. However, Prado has struggled lately. After a strong 7-1 run following his departure from the UFC, “Caldeirão” is now 0-2-1 over his last three fights. He was stopped via strikes by Anton Vyazigin in a heavyweight affair. He then fought to a draw with Doo Hwan Kim. Most recently, he dropped a decision to Kirill Kornilov in another move up to heavyweight. Prado is a knockout machine who has logged 14 of his victories via striking finishes.

While Ragozin will throw leg kicks, he favors a boxing approach. He’s a volume striker who can wear down opponents over the course of the fight. He doesn’t have one-punch knockout power and hasn’t been involved in a finish since his 2017 dismantling of the aforementioned Henle. Ragozin is usually able to dictate where the fight will take place as a result of his solid takedown defense. Even in his more recent defeats, Ragozin has kept it close enough to convince one judge that he deserved to have his hand raised.

The southpaw Prado is always on the hunt for the knockout, but his style is far from efficient against top competition. He throws looping punches that don’t always find the mark. However, he’s wild and aggressive enough to beat the majority of his opponents. The Brazilian also suffers from subpar takedown defense, though, which can lead to his downfall against strong wrestlers.

Ragozin has relied primarily on his boxing in recent fights, but he does have a respectable ground game as well. He was able to ground Enomoto at times, and he also had his best moments on the mat in a losing effort against Myasnikov. It’s likely that he’ll fall back to this approach against Prado, especially if the Brazilian starts tagging him.

Prado has the UFC name value to be an appealing target for Ragozin. In addition, the Brazilian is weak in areas where his Russian counterpart excels. Ragozin has to avoid those looping shots from Prado and make sure not to let the Brazilian start piling on volume the way that Enomoto did. Ragozin might also seek to get this fight to the mat, where he can control Prado and rain down ground-and-pound blows. All signs point to a decision nod for Ragozin in this one.

The LFA’s doubleheader weekend continues on Sunday with the organization’s 112th show. It’s quite the affair, too. It features a one-night welterweight tournament to crown the division’s new champion. In addition, there’s an intriguing featherweight scrap between Carlos Augusto da Silva and Otto Rodrigues.

Da Silva, 27, is another fighter who had a rough start before going on a superb run. He debuted in 2012 and won just two of his first four fights. Now, he’s on a 17-fight winning streak that dates back to 2014. “Sparta” really started increasing his strength of schedule in 2016 while continuing to win against veteran competition. He’s seen an almost equal amount of fights finished as he has decisions.

Rodrigues has been toiling around the pro circuit since 2007, but this will be his first appearance since a 2017 victory over Dževad Muftić under the Serbian Battle Championship banner. Rodrigues has also appeared with Brazil’s Jungle Fight organization, where he won the featherweight championship and played spoiler to two undefeated upstarts. He’s a submission threat who has tapped six foes.

This pairing looks great on paper, but the lengthy layoff for Rodrigues could factor into the outcome. We don’t know what kind of shape he’s in or how much ring rust will affect him. Prior to his hiatus, he displayed a strong grappling game. He’s willing to stand and trade with opponents, but he usually uses feints and striking exchanges as a way to close the distance before attempting a takedown. From there, he’ll attack with a variety of submissions.

Da Silva is long overdue for a showcase on a larger stage. He’s been a featured fighter on the Brazilian circuit for the last half decade. “Sparta” has logged a few quick finishes recently, but he’s also able to keep the upper hand even if a fight goes the distance.

Rodrigues could find success in this bout if he’s able to get it to the ground. However, momentum is certainly on the side of da Silva, who has picked up seven victories just since Rodrigues’ last appearance. Da Silva is capable of winning regardless of where the fight goes. He should end up getting the better of the striking exchanges while largely avoiding any prolonged time on the ground with Rodrigues. It will be a competitive affair that ultimately ends with a decision nod for da Silva.

Results can sometimes be hard to come by for regional organizations, and that seems to be the case for the latest Hex Fight Series show. There has yet to be any news from the promotion about Wilkinson’s clash with Kei…The fight between Amoussou and Jagelo came to an ugly end. Jagelo was in top position and controlling the fight, but the referee tried to pause the action. Amoussou then pushed Jagelo off him with his feet. Jagelo tried to retaliate, throwing a kick around the referee and connecting to Amoussou’s head. This led to a disqualification for Jagelo…Ekimov didn’t have a tough time with Felipe after all. It was a perfectly timed knee from the Russian that flattened the overly aggressive Felipe in the first round…”Best of the Rest” selection Michele Baiano scored a stoppage victory.