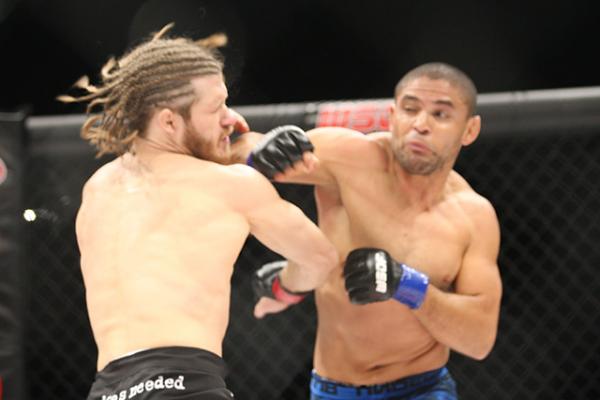 FAC 3’s Anderson Hutchinson: ‘It’s All or Nothing’

It’s hard enough when you have to move around from town-to-town while growing up. New faces, new people, new customs, and new attitudes can all be overwhelming, especially for a young child. However, a move to a new country with a new family takes it to a whole new level.

Brazilian Jiu-Jitsu player and professional fighter Anderson Hutchinson is all too familiar with this experience. It has shaped him into what he is today..

“I’m a fighter because of life,” Hutchinson told Combat Press. “Let’s just say it kept me out of trouble, it kept me out of jail, and it was a goal for me for my personal growth and confidence. I fight because I’m a competitive person by nature, and I’ve always been an athlete. I have my own personal demons that I battle with.

“I grew up until I was seven in Brazil and then I was adopted in the United States. I had culture shock, and there was some bullshit here and there. I played football, and I played soccer. I wish I would have started martial arts when I was a lot younger. I didn’t start until I was 19. I needed an outlet, and something like jiu-jitsu was the thing for me. From jiu-jitsu, I went to fighting.”

Hutchinson had a rough life growing up, but he tried to make the best of it. When he finally found jiu-jitsu, it changed his life.

“I started out with traditional Brazilian Jiu-Jitsu, and I’m a brown belt. I’m only not a black belt because I am not under a lineage. I’m a free agent, and I don’t really care for it right now, anyways, because I’m focusing on my MMA career. I’m sure I’ll get my black belt someday from somebody I respect and admire and [from whom] I want to receive my black belt.”

The 33-year-old Hutchinson made his pro MMA debut in February 2014. He now sits at 7-2, and his only two losses were by split decision, including in his last fight in September 2018. He has fought across the World Series of Fighting, Titan Fighting Championships, and, most recently, Island Fights. His last outing, in which he tangled with Mike Barnett, was a bit of a heartbreaker.

“He’s the hometown guy, this and that,” said Hutchinson. “Nonetheless, I didn’t perform to my ability, and the weight cut definitely fucked me over. I was struggling with weight-cut and health issues. I was in a place where I lost my killer instinct, and I let that happen, so it is only my fault. I’ve changed a lot of things. I know this is cliché with a lot of fighters saying, ‘This is the best that I’ve felt,’ but this is how I feel, in all honesty. This is how I feel in my heart right now.”

While he has never truly been beaten in the cage by anything other than one judge, Hutchinson’s life outside the cage has had a profound impact on his career as well.

“I think everybody wishes there were things they could have changed, but things happen for a reason,” said Hutchinson. “I believe in God, and I believe you must go through certain things for whatever reason God wants. I believe I’m here in this position for a reason, whether I like it or not. The beautiful thing is that I feel amazing where I’m at — the people around me, my coaches, my friends. I feel good where I’m at. For a while, I lost that animosity. I lost that killer instinct. That’s back.”

Hutchinson recently found out he would be back in the cage on Friday, August 14, to face veteran journeyman Kevin Croom for the inaugural Fighting Alliance Championships featherweight title at FAC 3 in Independence, Mo.

“I don’t even know him personally,” said Hutchinson. “I haven’t even looked him up, as far as watching him and studying him or whatever. I will do that when I feel like I should.”

Croom, who has fought in Bellator MMA, the Legacy Fighting Alliance, and Titan FC, among many others, is definitely no pushover of an opponent, but neither is Hutchinson, who works as a full-time security guard when he’s not training. Friday night could prove to be both the resurrection and turning point of Hutchinson’s career and life.

“I’m at the point now in my career where it’s all or nothing,” Hutchinson admitted. “There is a lot I’m trying to do, businesswise. When I started this, I was struggling with personal shit. It was about finding myself, gaining confidence, and becoming a better person and staying out of trouble. Now, it’s to the point where it’s more business, and I don’t know how long I have in this sport.

“I take good care of myself. I don’t fuck around. I don’t drink. I don’t do all that fancy bullshit and party. All I do is work at my job and train and help my teammates. My goal is to get as much out of my fight career, no matter how long it is. I want to build [up] to the big leagues, whether it’s UFC or Bellator, and I want to make as much money as I can.”

Hutchinson is certainly poised to show what he’s really made of in front of an online audience when FAC 3 airs live on UFC Fight Pass at 10 p.m. ET on Friday.