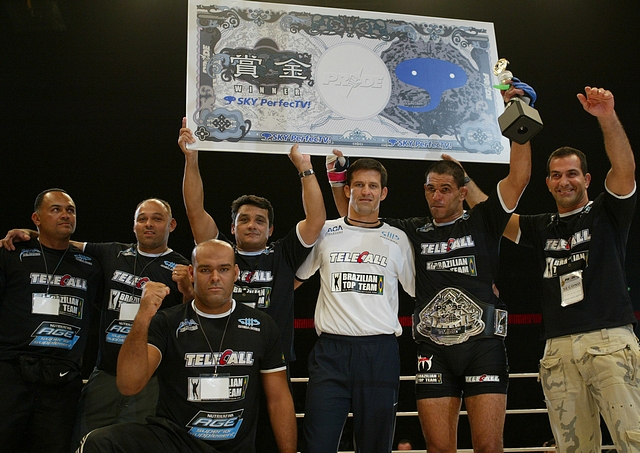 Over the course of this multi-part series, we will take a look back at the greatest upsets, comebacks and victories of Brazilian legend Antonio Rodrigo Nogueira’s 16-year MMA career. In part three, we looked at his fight with the enormous Bob Sapp. The size disparity continued in his next two fights, which we’ll look at in part four of this career retrospective.

It was Nov. 24, 2002. Semmy Schilt came up in the Pancrase organization in Japan, fighting his way to the King of Pancrase title and into the UFC for a brief time. Schilt would eventually become a four-time K-1 World Grand Prix champion, but he was coming off a draw over K-1 legend Ernesto Hoost at the time. With an MMA record of 22-10-1, Schilt carried an impressive resume into his bout with Nogueira.

Nogueira wanted to get Schilt down immediately, but he struggled to do so with the size difference. At almost 7-foot tall, Schilt used his length to defend the trip takedowns against the ropes. Nogueira ducked into a left high kick after they broke, allowing Schilt to get on top of Nogueira and land a few punches. The fighters got back to the feet, where Schilt threw a high left knee that glanced off of Nogueira’s arms.

Nogueira didn’t want to stay on the feet, pushing through to the mat and looking to pass the guard. Nogueira got his left leg free and moved to side mount, eventually sliding his knee across the belly of Schilt to move to mount. The champion was active on top with punches, breaking down his much bigger opponent. Schilt, looking exhausted, failed to attempt to buck out of mount initially, but he finally rolled Nogueira over, using his strength to finish the reversal.

Schilt tried to posture up, but he was caught. Nogueira slapped on a tight triangle that any form of shaking and twisting from Schilt couldn’t unlock. Nogueira put the arm across his body and grabbed the back of Schilt’s head to finish the submission. Punches from Schilt turned to taps as Nogueira finished another top heavyweight fighter.

The size disparity shifted back in Nogueira’s favor on Dec. 23, 2002, when he rematched Dan Henderson. Henderson, the RINGS: King of Kings 1999 tournament winner, had defeated Nogueira on his way to the tournament title. It marked the Brazilian’s lone loss in what was thus far a 21-fight career. The Henderson win was a split decision that Nogueira contested he had won.

Henderson was a late replacement at Pride 24: Cold Fury 3, coming in as the much smaller fighter in an underdog role. Henderson showed he wouldn’t be an easy win for the champion, though. The trademark punch of Henderson was his heavy right hand, and he showcased it early in the fight, snapping Nogueira’s head back in an exchange.

Henderson scored a takedown with ease, putting the champion on his back early in the first frame. Henderson started to land punches in flurries, but Nogueira attempted to lock in an omoplata and triangle. The submissions were defended by the underdog, who looked to step over and get his shoulder free. Nogueira locked it in tighter, but Henderson was able to gut it out and free himself.

Henderson continued to fight through submissions, escaping a tight kimura from the guard. Nogueira had the submission close on multiple occasions, but Henderson’s sheer will and defense of the full guard kept him out of trouble. Henderson rolled his arm free and eventually got back to his feet. Nogueira, looking frustrated, was hit with another Henderson counter right hook when he attempted to exchange in the corner.

Nogueira changed the game plan after he was hit with another big right. The champion exchanged his way into the clinch and started to land a few heavy knees to the body in between getting hit with a Henderson superman punch. At the end of the round, Nogueira’s misfortune turned with a takedown directly to mount. Nogueira looked tired in his corner, taking two big swigs of water as he was getting water dumped on his head.

Nogueira would dig deep. Henderson took a deep breath and then scored the takedown, but Nogueira wrapped up another kimura attempt, this time on Dan’s left arm. Henderson held onto his own hands, fighting off the submission with all he could. Nogueira broke the grip and pulled Henderson’s arm out. Henderson attempted to roll out of the submission, again defending the submission before he was put on his back following a failed leg-lock attempt. Nogueira moved to side mount, locking up the left arm for multiple submission attempts that Henderson escaped. Another round was done, this time with Nogueira having all of the momentum.

The third round began with a Nogueira trip takedown and follow-up move to mount, signaling his push for the finish. Nogueira used punches and an attempted keylock submission to set up an armbar on Henderson’s right arm. Nogueira switched his hips and tightened up the armbar, scoring the submission and avenging his only career defeat.

At 19-1-1, Nogueira was the consensus No. 1 heavyweight in the world. On March 16, 2003, another fighter took that title. In part five of this multi-part Nogueira career retrospective, we’ll look at the end of Nogueira’s Pride title reign and one of his biggest fights against another fellow Pride legend.