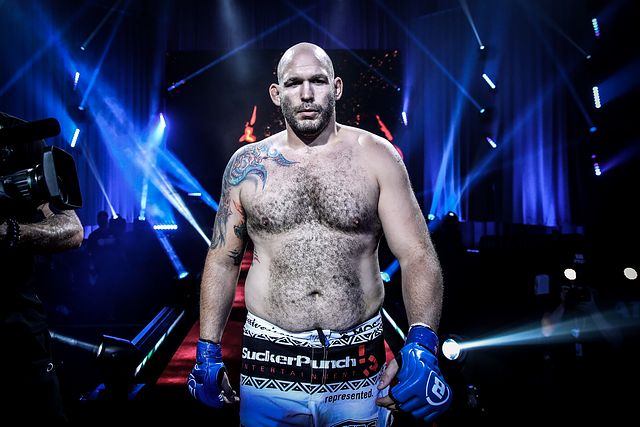 After taking off last week, Bellator MMA returns on Friday, June 25, with a hard-hitting event that will surely entertain. Bellator 261 features a variety of talent throughout the fight card. The lineup includes an interim heavyweight championship tilt, rising stars looking to make a statement, and several intriguing match-ups.

The heavyweight division has always been known for its unpredictability. Between only needing one punch for a knockout and the lack of cardio for many of the big men, anything can happen in a heavyweight fight. On Friday night, that rings true even with the interim championship up for grabs. Tim Johnson and Valentin Moldavsky will do whatever it takes to claim the gold.

In the co-headliner, two flyweight ladies battle in a fight that holds major title implications. UFC veteran Liz Camouche will try to protect her No. 2 ranking against the third-ranked Kana Watanabe. If either fighter can get a finish, then they will have a strong argument for the next shot at the belt.

Three additional fights round out the main card for Bellator 261, which takes place at the Mohegan Sun Arena in Uncasville, Conn. The festivities kick off with five prelim fights on YouTube at 6:30 p.m. ET. The main card follows on Showtime at 9 p.m. ET.

After a rough UFC run and start to his Bellator campaign, Tim Johnson has pulled a stunning turnaround and won his last three outings. Now, he fights Valentin Moldavsky, who has been perfect in his own Bellator tenure, for the interim heavyweight title. What will be the key to a Johnson victory in this contest?

Johnson seemed to be at the end of his career after getting cut by the UFC. Instead of quitting, he signed with Bellator and reinvented himself. He lost his first two Bellator fights against Cheick Kongo and Vitaly Minakov, but he has gone on a winning streak over his last three appearances and has performed at a championship-caliber level. After avenging his loss to Kongo at Bellator 248, Johnson will now have the opportunity to become a Bellator champion.

His opponent, Moldavsky, knows a thing or two about winning. Since joining Bellator in 2017, he has won five fights with the promotion. His only problem is that he has not faced any true contenders. Johnson will be his first true test in the heavyweight division, but Moldavsky is arguably in his prime and has the skills to get the job done.

Johnson has looked good in his last few fights, and it has a lot to do with his power. If he wants to become the champ, Johnson needs to find ways to use this power. He must maintain the distance with jabs and powerful combos, both of which should prevent Moldavsky from moving forward. The last thing that Johnson can allow to happen is for Moldavsky to get him to the ground.

During Moldavsky’s Bellator tenure, one thing has remained constant: when he gets his opponent to the ground, they rarely get up. Moldavsky was once a light heavyweight, and his athleticism at heavyweight has created problems for the division. His path to victory seems clear: avoid Johnson’s power, close the distance, and land the takedown.

The new Bellator champion will be determined by the aforementioned distance management. Either fighter can get the finish, but they recently have gone to decision in most of their fights. Johnson has the knockout power to stop his opponent, and he will try to do so once again. Meanwhile, Moldavsky needs to use his athleticism and wrestling to break down Johnson for five rounds.

Co-headliner Kana Watanabe has also gotten off to an excellent start in her Bellator run, but she’s set to meet her toughest opponent yet in UFC veteran Liz Carmouche. How likely is Watanabe to emerge from this bout while still undefeated?

Carmouche has been everything Bellator was hoping to get when it signed her. The former UFC standout has previously fought Octagon legends Ronda Rousey, Valentina Shevchenko and Miesha Tate. Since joining Bellator last year, Carmouche has won both of her fights. After impressively beating Vanessa Porto, Carmouche is now in a title-contender bout against Watanabe.

Watanabe is not a fighter to underestimate. She held an 8-0-1 record before signing with Bellator. She has continued her dominance by winning both of her Bellator outings. The last win came only two months ago when she got the nod in a split decision against Alejandra Lara. Although Watanabe has been extremely successful thus far, Carmouche has skill advantages that could lead to her handing the Japanese star her first pro loss.

One advantage for Carmouche is her ability to mix up her striking and grappling. In Watanabe’s last fight, she showed to be more one-dimensional than was originally thought. Watanabe had times when she was getting picked apart on the feet by Lara. She used her judo background to control the grappling aspect of the contest, but she struggled in the striking realm.

In the past, Carmouche has used her pressure fighting to throw off her opponent’s game plan. She also has reliable grappling that has kept her out of trouble on the mat. Carmouche needs to overwhelm Watanabe by moving a lot and striking actively. If Carmouche can keep this fight on the feet, then Watanabe could end up having a bad night at the office.

Watanabe’s success depends on her ability to bring this fight into the grappling department. Although Carmouche has looked sharp on the ground lately, her opponent still has a major advantage there. Watanabe needs to close the distance, score a takedown, and maintain top control. This is easier said than done, of course, but Watanabe has successfully accomplished this goal throughout her career.

The fight will most likely end up going to the ground at some point. Carmouche’s ability to get back up will determine the outcome of the contest.

Myles Jury and Sidney Outlaw. Both fighters are ranked in the Bellator lightweight top 10 and want to take the next step forward. They each have been in plenty of wars with the understanding that this fight could be the same.

Since joining the company in 2019, Jury has been impressive in his three fights. After losing to Benson Henderson in his promotional debut, Jury was able to win his next two bouts. These two wins were enough to boost him into the No. 4 spot in the rankings. However, Jury has not fought in over 10 months.

Outlaw has spent a similar amount of time on the sidelines, but he holds a 2-1 Bellator record. He joined the organization in late 2019 and beat Roger Huerta in his promotional debut. In his sophomore Belltor outing, Outlaw lost to Michael Chandler by first-round knockout. He bounced back from that loss and beat Austin Piccolotti by a split decision at Bellator 244. His next opponent is arguably the toughest match-up stylistically that Outlaw has faced.

With the opportunity to climb the rankings, we can expect both fighters to go all-out. They have each shown impressive tactical striking that could make this fight a chess match. The grappling may be limited, as they have similar skills that should balance out. If these fighters stay on their feet and strike actively, we could end up with the best fight of the night.