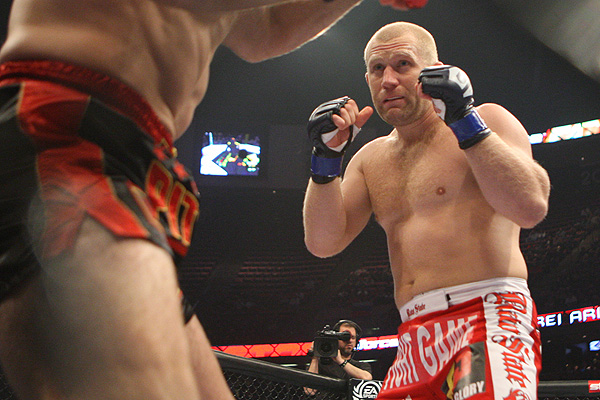 Bellator MMA keeps the action rolling as the promotion heads to the Menora Mivtachim Arena in Tel Aviv, Israel, for Bellator 234.

The main event of the night takes place in the heavyweight division, where Sergei Kharitonov meets Linton Vassell. Kharitonov is currently on a six-fight winning streak. The veteran kickboxer is looking to continue his run to the top of the division for a shot at the heavyweight belt. Vassell jumped up to heavyweight for his last fight against Valentin Moldavsky. Unfortunately, Vassell dropped a decision to Moldavsky for his third consecutive loss.

The evening’s co-headliner is a lightweight showdown between Roger Huerta and Sidney Outlaw. Huerta is going through a rough stretch in which he has won just two of his last five fights. The UFC veteran last fought just over a year ago in a loss to Patricky “Pitbull” Freire. Outlaw has won eight straight fights. This will be Outlaw’s second appearance for Bellator.

Three additional contests round out the main card. Fans will be treated to a middleweight battle between Austin Vanderford and Grachik Bozinyan. At welterweight, Haim Gozali fights Artur Pronin. In a clash of lightweights, Aviv Gozali and Zaka Fatullazade take the cage.

Linton Vassell is winless through his last three outings. Is he nothing more than a sacrificial lamb for Sergei Kharitonov in the heavyweight headliner?

I would say so. Vassell is a veteran and can help progress Kharitonov’s Bellator career. Kharitonov is one of the bigger names in the Bellator heavyweight division, and the company is itching for a reason to give him a shot against reigning champion Ryan Bader.

Kharitonov has been on a roll after a stunning upset loss in Bellator debut against Javy Ayala. The Russian kickboxer has won six consecutive fights, including three inside the Bellator cage. Kharitonov has relied a lot on his striking and has earned four knockout victories in his current run. His striking arsenal is the key to victory against Vassell.

Two of Vassell’s last three losses have come by way of knockout. This includes a head-kick stoppage against Phil Davis. Kharitonov has much more power than Davis, who is known for his wrestling.

Vassell excels in the grappling department and has earned nine victories by submission. He is actually going to have a reach advantage of eight inches, though, which should help in keeping Kharitonov at bay. If Vassell utilizes his reach correctly, then he can avoid Kharitonov’s striking and try to eke out a decision victory.

Vassell has lost a step in his last few fights, even though losses to Davis and Bader are hardly the sign of a steep decline. Kharitonov should be able to make this a close-range fight and secure the knockout.

It’s been more than five years since Sidney Outlaw last appeared with Bellator. Can we expect a breakout performance when he clashes with fellow lightweight Roger Huerta?

While it may be more than five years since Outlaw last appeared in the Bellator cage, he has fought since then with solid results. Outlaw is currently riding an eight-fight winning streak on the regional circuit and has produced three straight submission victories. This is a huge confidence booster heading into a fight with an experienced veteran like Huerta.

This contest will provide Outlaw with a notable name to add to his record. It could even give him a firm foothold in Bellator. If Outlaw is going to win this fight, it will come down to his grappling. Outlaw has earned seven of his victories via submission. Huerta, on the other hand, relies more heavily on his striking to win fights. Huerta has also been on the decline, with a 2-4 mark since 2015.

Outlaw will enjoy a five-inch reach advantage over his opponent, which will help him to close the distance and secure the takedown. From there, Outlaw just needs to impose his will on top and stay out of Huerta’s range from any big bombs. This is a fight made for Outlaw to win. Expect him to find the submission finish.

This should be an exciting fight. Both fighters are coming in after notching an overwhelming amount of their victories before the final bell. Bozinyan has ended six fights by way of submission and three via knockout. It will be interesting to see if he can work his submission game against Vanderford, who most recently competed against Jake Shields in a grappling match. Vanderford also splits his six finishes equally between knockouts and submission. This fight will not go the distance. It will also produce the most entertainment this card has to offer.