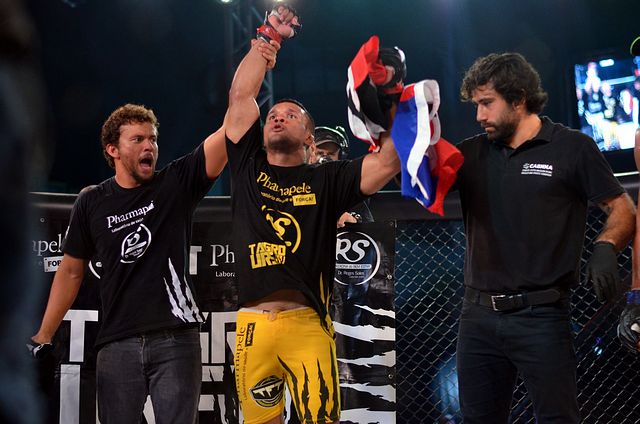 Out of Obscurity: Future FC 7, LFA 72 and Battlefield FC 2

The Future Fighting Championships promotion is living up to the first word in its name with its seventh offering. The card is packed full of fighters with prospect records. This includes bantamweight-title hopefuls Herbeth “Índio” Sousa and Taigro Costa.

Índio definitely holds one of the prospect records, with just a single defeat through 14 fights. He debuted in 2012 and worked the smaller shows in the regional circuit of Brazil for the first two years of his career. The 25-year-old took a significant step up when he joined the Jungle Fight organization in 2015. He reeled off three straight wins to earn a shot at the vacant flyweight belt. Sousa stumbled, though, in a decision loss to Paulo Oliveira, who was a mediocre 5-4 at the time and now possesses a 9-5 mark. After a rebound win on the regional circuit and a successful stop with Shooto Brazil, Índio moved up to the bantamweight division for his Future FC debut. The Constrictor Team product was able to win the March bout over Glyan Alves via a first-round submission finish.

The 31-year-old Costa has been plying his trade since 2007. He won four of his first five fights on the small shows before stepping up to compete for Watch Out Combat Show. Unfortunately, things didn’t go so well for Costa, who dropped a split verdict to rookie Everton Martins. The Tata Fight Team member was able to rebound nicely to put together a nine-fight winning streak that includes stops with WOCS and Shooto Brazil. This streak culminated in a victory over Valdines Silva. “Urso Branco” went on to lose two of his next three bouts, though. He made his Future FC debut in May with a win over Claudio Marcelino.

Índio has the better overall winning percentage, but that doesn’t make him the clear-cut favorite here. Alves is the only man he’s met that has had double-digit wins. Sousa lost a key title fight, and he’s also an undersized bantamweight who has spent a good portion of his career at 125 pounds. Meanwhile, Costa has spent time on a far bigger stage with mixed results, and he’s also a larger bantamweight who has competed at featherweight on several occasions.

Costa’s inconsistency is a concern. He’s alternated between wins and losses over his last five fights for just a 3-2 stretch. He’s won very few of his fights against seasoned opponents, too. Furthermore, Costa tends to be a decision machine, whereas Sousa has secured a majority of his victories by submission. Still, Costa should be the larger and more experienced of the two men, and those are huge advantages that can’t be dismissed. If Costa’s size is too much for Índio, then this fight could go the distance and end with the belt around Costa’s waist.

There aren’t any title fights on the 72nd edition of Legacy Fighting Alliance, but there are still some key contests in this lineup. Jake Heffernan is out to bounce back from his first pro loss, Anthony Birchak makes a stop with the LFA on his road back to the top-tier promotions, and middleweights Daniel Madrid and Chris Harris headline the show.

Madrid has had his ups and downs through a 22-fight pro career that kicked off in 2006. “DemiGod” won his first four fights, but then took a roller-coaster ride in which he lost one, won two, lost again, armbarred Tom Gallicchio for a victory and then went on a two-fight skid. His losing streak under the M-1 Challenge banner was enough to cause Madrid to regroup in the more familiar surrounding of Rage in the Cage and King of the Cage. After compiling a six-fight winning streak, Madrid spent more than a year on the sidelines through much of 2016-17. He returned to action in late 2017 and suffered back-to-back defeats against UFC veteran Alex Nicholson and future UFC signee Ian Heinisch. Madrid again took a step back, this time with a pair of victories under the RUF MMA banner. In February, the 35-year-old returned to the LFA, where he suffered his loss to Heinisch, and scored a first-round finish of UFC washout Seth Baczynski.

The 29-year-old Harris followed up a 10-2 amateur run with a trio of quick knockout finishes to launch his pro career in 2015. After yet another stoppage victory to close out the year, Harris landed on the Bellator 150 card, where he notched a unanimous-decision win over Julian Marquez. Harris bounced between the Evolution Fighting Championship organization and Bellator for his next four fights. At Bellator 159, he submitted .500 fighter Matt Foster. Two fights later, at Bellator 171, he dropped a decision to Jordan Young. Harris then migrated to the LFA, where he beat The Ultimate Fighter 16 alum Cortez Coleman before suffering a submission loss of his own against Brendan Allen. Harris also struggled against Chance Rencountre in a recent fight, but he’s mostly had his hand raised in his recent fights, including an exhibition bout against Marcelo Alfaya.

Both of the middleweights have flashed potential, but neither has emerged as a world-beater to this point. Harris has taken the seemingly bigger challenges, with his stops in Bellator, but he hasn’t steamrolled the competition. Madrid has far fewer notable opponents, but he did beat Baczynski recently. Granted, that’s not exactly hard these days.

Harris can beat opponents almost anywhere, but he might want to avoid a ground battle with Madrid, who has 14 submission victories. If Harris can keep this standing, he can test Madrid’s chin, which proved vulnerable against Nicholson and Heinisch. This one should end in a knockout victory for Harris.

Want a card full of UFC names that isn’t a UFC (or Bellator) show? Then perhaps you should join us here on Combat Press for the FITE TV pay-per-view stream of Battlefield FC 2. Bryan Caraway, Wagner Prado, Ben Wall and headliners Will Brooks and Gleison Tibau round out the list of UFC veterans in the lineup. Of course, Brooks and Tibau take center stage.

Brooks was once grouped with the likes of Eddie Alvarez and Michael Chandler in the list of best lightweights outside of the UFC. He topped Chandler twice in Bellator title bouts and left the promotion as the champion. He entered the UFC in 2016 and defeated Ross Pearson in his Octagon debut. Brooks struggled through his next three fights, though, and suffered losses to Alex Oliveira, Charles Oliveira and Nik Lentz. The 32-year-old American Top Team fighter was jettisoned from the organization and landed in the Professional Fighters League for its inaugural 2018 season. Brooks decisioned Luiz Firmino and and Robert Watley en route to the playoffs, where he fought to a draw with eventual finalist Rashid Magomedov. The former high school wrestler and football player was initially expected to fight fellow UFC veteran Abel Trujillo at this show, but Trujillo was replaced by Tibau.

Tibau, now a veteran with 47 pro fights, was the quintessential grinder in the UFC’s lightweight division. The 36-year-old was never among the very best, but he was always a reliable challenge to anyone the UFC put in front of him. The Brazilian made his pro debut in 1999 and first appeared with the UFC in 2006 at the organization’s 65th pay-per-view show. He entered as a 15-2 prospect and exited with a loss to Nick Diaz. By the end of his tenure inside the Octagon, Tibau had gone 16-12 for the promotion. The former UFC lightweight scored notable wins over the likes of Jeremy Stephens, Rafael dos Anjos, Francisco Trinaldo and Jamie Varner, but he fell to Khabib Nurmagomedov, Michael Johnson and Tony Ferguson, among others. While he typically would lose one and then win a couple, he went on a horrible slide at the end of his UFC stay and lost four in a row. Most recently, though, he defeated Efrain Escudero on the Golden Boy card that featured Chuck Liddell and Tito Ortiz.

Tibau is one tough SOB. Seven of his UFC outings ended in a split decision. Another 10 went the distance with unanimous verdicts either for or against the Brazilian. He was stopped several times, but Tibau certainly wasn’t an easy out. The jiu-jitsu specialist can hold his own on the feet, but he’s not exactly a big knockout threat. He’s scored some submissions, too, but he’s hardly a true predator on the mat.

Brooks is in for a tough fight here. The 32-year-old couldn’t translate his Bellator success into a similar run in the UFC, and now he’s stuck fighting one of the strongest gatekeepers in the division. Tibau’s recent skid could be seen as a sign of decline, but he wasn’t exactly losing to nobodies. Brooks, meanwhile, needs to rediscover the fire that carried him to two victories over Chandler.

The outcome of this fight depends on which Brooks shows up. If it’s the confident former Bellator champ, then he’ll likely outwork Tibau for the judges’ nod. If it’s the lackluster performer we’ve seen more recently, then Tibau might manage to squeak out another close one. We’re leaning toward the former outcome.