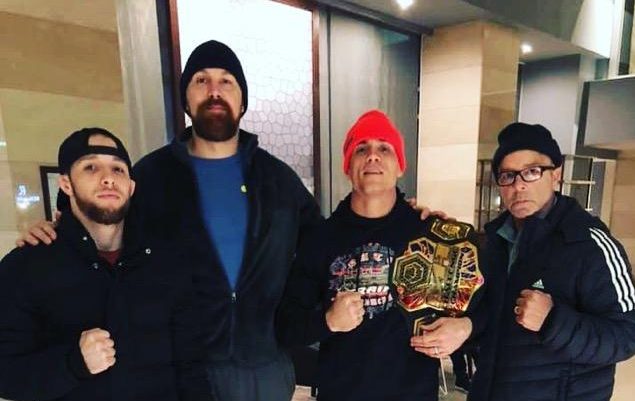 It’s amazing how in a global sport like mixed martial arts, promotional bubbles exist. Some fans only know the UFC and Bellator. Some specifically live for regional circuits, like Legacy Fighting Alliance or Ring of Combat. However, with the onset of international promotions like ONE Championship, or even the M-1 Challenge spin-off of M-1 Global, the bubble is starting to pop.

So many talented fighters exist on U.S. soil that there are almost too few roster spots to fill. So, when a guy like Nate “The Train” Landwehr arises out of a relatively small town in Tennessee, he will go where they appreciate a guy with his talents as a fighter. His story is an all-too-familiar one.

“I started playing football when I was in third grade, and I played it all the way until I graduated high school,” Landwehr told Combat Press. “I also wrestled in high school, and I ran track all four years. In college, I ran track also.

“After college, I was going to get a job — just trying to work out what I was going to do — and I ran past this little gym. I walked in, borrowed some gloves, started smashing shit, and two weeks later, I had my first fight.”

It’s not an accident when a guy like Landwehr, who hails from Clarksville, Tenn., ends up being a great professional athlete. However, sometimes you just don’t know what you don’t know, and it takes a casual walk past a gym to open that door. Now, he’s 13 fights and over six years into his pro career.

“I fight because it’s the realest shit you can do,” Landwehr explained. “I always got into a bunch of fights growing up, and I always loved sports, so it was pretty much a no-brainer. For example, when I run into people from my childhood past, and I tell them what I’m doing, I never hear, ‘That’s odd. I wouldn’t expect that.’ It was just a good fit for me.”

Landwehr trains out of SSF Submission Academy under the tutelage of longtime coaches Mike Merriman and Angel Natal. He’s also surrounded by a different kind of warrior.

“Clarksville is real cool,” Landwehr said. “We’re coming up. Pretty much two cities. We’ve got Ft. Campbell, which is the home of a bunch of killers — the 101 Air Assault — and they’re right there with us. Shout out to those Night Stalkers out there getting it in. If anything goes down, they probably have a part in it, military-wise. Clarksville, we got about 200,000 [people], and we’ve got one world champion.”

Landwehr is referring to himself. In his last outing, which took place at M-1 Challenge 95 in July, he secured the M-1 featherweight strap with a second-round knockout of Khamzat Dalgiev, who previous only had one loss through 11 bouts. Landwehr’s previous fight, also under the M-1 Challenge banner, ended in a split-decision win over Viktor Kolesnik, who was previously 14-1-1. In Landwehr’s M-1 Challenge debut, when he was 8-2 in his career, he knocked out Mikhail Korobkov, who was previously 13-2-1 as a pro.

The point is that the Tennessee native is not crossing the pond to fight a bunch of tomato cans. He’s been in Russia mopping the cage with a bunch of great opponents.

“I love fighting for M-1,” said Landwehr. “It’s the best promotion in the world. A lot of promotions passed up on me, because I’m not this cookie-cutter type of guy. M-1 gave me an opportunity in Russia, straight out of Tennessee, and I haven’t let them down, and they haven’t let me down, since.”

The opportunity presented by M-1 Challenge also opened Landwehr’s eyes to his value as a fighter. He is very entertaining to watch, and his performances speak for themselves. This all helps to boost his confidence as he enters his first title defense on Saturday. Landwehr puts hi belt on the line when he faces Andrey Lezhnev at M-1 Challenge 100 in Atyrau, Kazakhstan.

“I’m a champion,” said Landwehr. “That’s a takeaway. If you stand in front of me, you’re probably going to get knocked out, and that’s a good takeaway. I have 11 pro wins, and seven of those are nasty knockouts. All of those other decisions were the ‘Fight of the Night,’ and two of those were some of the best fights of the year. When I come, I’m all-in and I ain’t playing no games.”

Landwehr’s upcoming opponent Lezhnev is currently 18-7 as a pro. He has been in the M-1 Challenge promotion since 2015. Lezhnev has only been stopped once in his pro career. He is currently riding a three-fight winning streak that includes one knockout and one submission. The Ukrainian challenger brings another big battle to “The Train.”

“He’s a tough guy,” Landwehr admitted. “It will be a great match-up, and we’ll see if he’s going to be the one to take me to the next level, as far as pressing me into five rounds. I’ve been five rounds before. We’ll see if he can make it.

“He’s a ball of muscle — short guy, real bulky, real powerful, real tough, real gritty, has a ton of heart. He’s coming to try to be champion. He’s going to do everything he can in his power to become champion. I feel like it’s going to be a nasty, nasty knockout on my side.”

Landwehr’s first foray into a big show, outside of the regional circuit, was in M-1 Challenge. It only took him three fights to get the belt around his waist, and he has no intentions of letting it go. On Saturday, at 11 a.m. ET on Fite TV right here on Combat Press, tune in to watch the Tennessee native put on another great show as he continues to climb the global ladder as a world champion.

“There ain’t no good movies out. There ain’t no new restaurants,” said Landwehr. “But the ‘Nate-the-Train’ show is always worth watching.”

Landwehr would like to thank all of his coaches and training partners, as well as his family, friends, fans, sponsors and his management team at Relentless Sports Management. Follow Nate on Instagram: @NateTheTrain
Advertisement