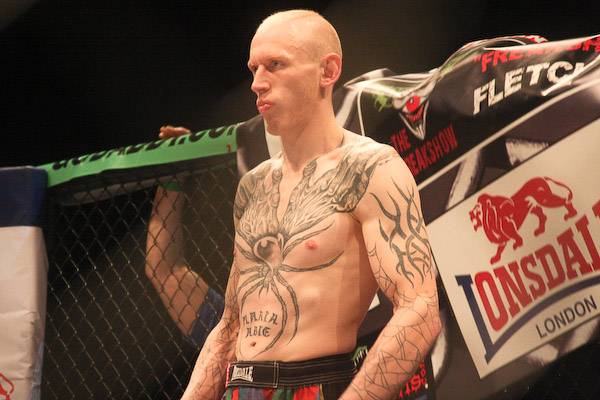 Brightmon was originally scheduled to compete for the lightweight title opposite Mansour Barnaoui at BAMMA 16, but he will now face Fletcher after Barnaoui was forced out of the original bout due to injury.

Fletcher will be eager to prove he’s not just a showman but a legitimate martial artist as well. Fletcher holds a 4-1 mark inside the BAMMA cage, with his only loss coming to the champion, Barnaoui, at BAMMA 14. “Freakshow” first competed for the British promotion in 2011 and 2012 before making his TUF reality show appearance. After falling short against Norman Parke in the TUF Smashes lightweight finals, Fletcher suffered another UFC loss when he dropped a unanimous decision to Mike Ricci. The 31-year-old then returned to BAMMA, where he defeated Tim Newman, lost to Barnaoui and topped Tony Hervey. This will be Fletcher’s second fight of 2014.

Brightmon, meanwhile, comes in with nothing to prove and everything to lose. The Gorilla House product was set to make his promotional debut in a championship contest, but now he risks his No. 1 contender status in this affair with Fletcher. Brightmon has been fighting professionally for more than seven years and has a 12-4 record to show for it. He has spent a significant portion of his career competing under the X-1 banner in Hawaii. After suffering back-to-back losses, Brightmon rebounded and currently rides a three-fight winning streak. He was inactive from 2010 until 2014, but this will mark his third bout since returning to action.

BAMMA 17 takes place at the Victoria Warehouse in Manchester, England.