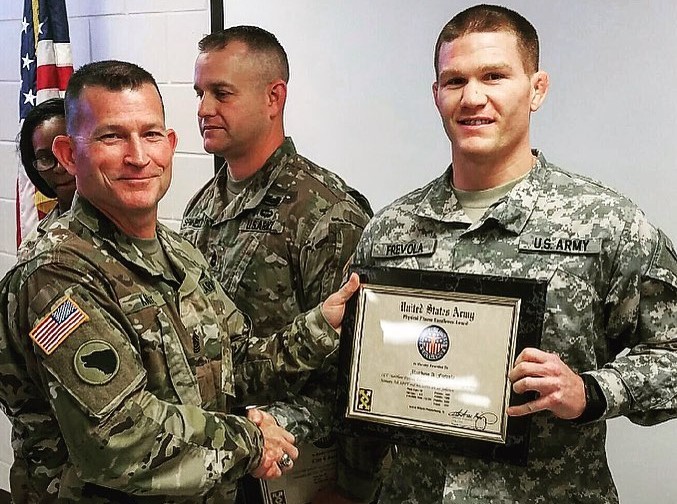 Matt “The Steamrolla” Frevola rolled onto the scene in the inaugural season finale of Dana White’s Tuesday Contender Series. The Serra-Longo protogé earned a UFC contract and kept his undefeated record intact. On Saturday, Nov. 3, he had the opportunity to compete at Madison Square Garden when he took on fan-favorite Lando Vannata in the featured UFC Fight Pass preliminary bout leading into UFC 230. The bloody battle was an instant classic and ultimately resulted in a draw.

“It was a good fight. I’m doing good. My body feels awesome,” Frevola told Combat Press. “I’m going in to do some training tonight.”

This revelation was somewhat surprising, given the level of brutality of his back-and-forth war of attrition with Vannata. The first round started with the usual feeling-out process, but Frevola, the underdog, began to find his range and landed several big shots before ultimately dominating Vannata at the end of the round and nearly submitting him at the bell. The next round was a dominant performance for Vannata, but round three was anyone’s guess.

“I jumped on the guillotine in the first. That was the closest I came to finishing the fight. I had that choke deep. I should’ve finished it there,” said Frevola. “I thought I won the fight. My coaches all said that I won. I thought I won rounds one and three. All three judges said I won round one and three. But two of the judges said round two was a 10-8 [to Vannata]. That’s why they called it a draw.

Every fighter who has ever put on a pair of gloves dreams of fighting under the bright lights of Madison Square Garden. Frevola is a native New Yorker and trains under the tutelage of Matt Serra and Ray Longo, so UFC 230 and the week leading up to it were the biggest moments in his career.

“It was huge,” he said. “Ever since they started hosting UFC at Madison Square Garden, I’ve been putting it out there that I’m gonna be fighting at MSG eventually. I was away doing some [Army Reserve] training when my manager called and said they offered Vannata for MSG. I was so pumped. I came back to New York and had a great fight camp, and fight week was awesome. The weight cut went real well; no problems at all.”

A little-known fact about Frevola is that he serves in the U.S. Army Reserve as an Engineer Officer. He trains closely with top-ranked UFC fighters like Chris Weidman, Aljamain Sterling and Al Iaquinta as well.

Frevola was 6-0 this time last year. Despite far less experience than most others in the talent-rich UFC lightweight division, he earned his way in by an impressive showing on the first season of the Contender Series. In January, he made his official UFC debut in the first bout of a four-fight contract. He only lasted one minute against Marco Polo Reyes in their UFC St. Louis preliminary bout. It was his first MMA defeat, either amateur or professional.

“After that fight, I learned to be more composed [and] fight smarter in general,” said Frevola. “I still have that aggression, but it’s more calculated. I honed my Muay Thai, my kicks, my knees and elbows. In this fight, I definitely got to put my stand-up on display.

“I’m pumped. I went out there and showed the world that I belong. I showed them a lot of the weapons that I have and how dynamic I am as a fighter. I knew Vannata was the same breed a fighter as I am — exciting, flashy, et cetera. I know that UFC has me in that category, and so hopefully they start matching me up for exciting fights.”