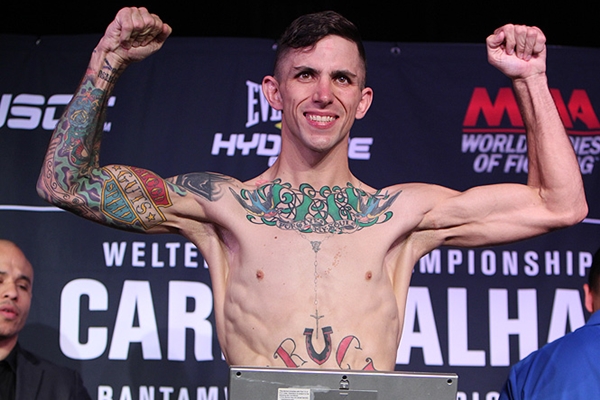 Fear. It’s an emotion that is perhaps the most powerful driving force within a person. That is, unless your name is Shane Kruchten.

The newly signed Bellator featherweight heads into a showdown with uber-prospect Aaron Pico at Bellator 192 at The Forum in Los Angeles. Pico is a name many MMA fans know and one that few fighters are looking forward to facing. Pico enters their contest with a mile-long list of accolades and the hype to match. Meanwhile, Kruchten sports the experience advantage. He’ll also find himself in a familiar role.

“I’ve been the underdog in almost every fight I’ve ever had,” Kruchten told Combat Press. “I was a huge underdog against Mike Corey back in the [World Series of Fighting] and nobody thought I’d be able to make it past three minutes. I made it a round and half with a torn retina. Anything can happen in a fight. Case in point, the fight I always bring up is Matt Serra versus [Georges St-Pierre]. Nobody gave Matt a snowball’s chance in hell to win and then he goes in there, clobbers GSP and takes the title. I’ve stared death in the face. You’re not going to scare me any more than that.”

After joining the U.S. Marine Corps at just 17 years old, Kruchten was forced to grow up under extreme conditions while serving overseas. It was that world of sand and blood that created personal demons that Kruchten faced head-on after being injured by an IED in Iraq. The San Diego Union-Tribune featured Kruchten in a masterful profile that shows the light and dark side of his background.

With his personal demons conquered and a renewed sense of dedication to the fight game, Kruchten now enters the biggest fight of his MMA career. Even though Kruchten has encountered far worse than Pico in his life, he will still face seemingly insurmountable odds at Bellator 192.

Although Pico sports just a 1-1 record in MMA, the uber-prospect will certainly be a heavy favorite. Not only is the hype reaching new heights, but Pico is coming off a highlight-reel finish in his last bout. Meanwhile, Kruchten has been away from the cage for over a year. The former WSOF athlete spoke with the newly created Professional Fighters League management regarding his future inside the Decagon.

“I had a meeting with [PFL President] Ray Sefo while I was in Vegas, and, you know, we talked about the upcoming season,” Kruchten said. “They were telling me that the roster is pretty stacked and they weren’t going to have room, so they were cool with me looking to fight elsewhere. They’ve been very good to me while I’ve been with them. Ray and Carlos [Silva, PFL CEO] kept me informed and have been very supportive, even now with me moving forward.”

ATTENTION, ALL HANDS ON DECK🇺🇸 Here is the news you all have been waiting for!!!!!!! Contract is signed, I’m Fighting on the Main Card at The Forum at my new home in @bellatormma! January 20th you will see the War Rhino doing what he does, and supporting all his fellow service members at the same time! Let’s do the damn thing!!!!!!! I’ve been at this grind for years, it all pays off in just over 4 weeks!!!!! 🇺🇸🇺🇸🇺🇸 #bellator192 #alwaysgivingback #10thplanetsandiego #tigersmallsboxing #teamhurricaneawesome #allianceeastlake #teamclinchgear #yesyesyes #usmc #grunt #mma #jiujitsu #prizefighter #hurtgame #terminallance #alwaysupgrade #believeandachieve #kruchteaminaction #warrhinoiscoming

With a three-fight Bellator MMA contract in hand, Kruchten only took a matter of a few hours to put pen to paper in style. Kruchten hasn’t stepped inside a cage since his fight against Jeremy Mahon at WSOF 34 at the tail end of 2016, but that doesn’t mean he was at home eating cake and pizza.

“Not being able to fight for a year sucks, but I was still active,” Kruchten said. “I competed in jiu-jitsu and was in the gym, waiting for the chance to get another fight. We got two champions coming out of this gym last year — Tony Ferguson and Ilima-Lei Macfarlane. I was part of a camp of a world champion. I was also part of numerous other camps, like Liz Carmouche and other fighters in lower-level promotions. So I was getting my licks in every day and getting beat up five days a week like normal.”

It was business as usual for the former Marine, but with a few twisters. While Kruchten took part in a number of fight camps, the absence of a fight camp of his own allowed “The War Rhino” to improve his overall game. Besides taking home a few aches and pains each day, Kruchten also came away with a renewed sense of dedication.

“Seeing someone like Ilima-Lei become world champion and being a part of these big-name camps was an honor, but it’s also something that drives me to get better,” Kruchten said. “A lot of guys who’ve been competing for as long as I have can sometimes get complacent. I can’t afford to get complacent working with these high-level guys and girls.”

So @boogeyman_tfs and I have been nominated for the 2017 Nibiru Warrior of the Year. I could list all of the reasons why I think one of us should win it, but at the end of the day it's kind of just a popularity contest and you need to have an account with 10thplanetjj.com in order to cast your vote. But I'm still gonna post pictures of all my accomplishments for 2017 cause I still wanna win that shit 😂. #10thPlanetSanDiego #10thPlanetFreaks #NibiruWarrioroftheYear #ilimanator

Kruchten is anxious to showcase the improvements he’s made while out of the MMA game. He’s maintained an active lifestyle away from the cage by training regularly and competing in jiu-jitsu matches. Kruchten’s time on the mat will likely come into play against his talented opponent.

Pico earned silver and bronze medals at the respective 2014 and 2015 Junior World Championships. He also took home a gold medal at the Cadet World Championships in 2013. As if that wasn’t enough, Pico qualified for the Olympic trials at just 19 years old. Combined with a successful background in pankration and boxing, Pico has all the makings of a star in MMA. It makes for a daunting task for any fighter to take on.

“Look at the list of names that are lining up to fight Aaron Pico. Don’t worry, I’ll wait,” said Kruchten. “There’s none. Nobody is like, ‘Yeah, give me that fight!’ Same thing with Andre [Harrison]. There’s not a list of guys waiting to fight him. There’s me. I’ve always been that guy. I love fighting guys that people are scared to fight.”

Props should also go to Pico. Instead of facing guys with questionable records, Pico’s two opponents in MMA have a combined record of 16-7. Kruchten sports an impressive 12-3 record and believes the experience edge won’t be the only advantage he has against Pico.

“He’s got a really strong wrestling game,” Kruchten said. “I don’t think the wrestling has had the time to evolve to the grinding style — you know, the Randy Couture style — and that’s something I thrive in, getting guys against the cage and making it into a dirty fight. He hasn’t really been tested with elbows and knees thrown at him in a high-pace scenario. Yeah, he’s won Golden Gloves, but a bare elbow and a bare knee feel a lot different than a padded glove.”

“You're not going to enjoy every minute of the journey, but the success you'll find at the end will make it all worth it.” Never stop pushing towards any goal in you life, everything you want is on the other side of fear! #bellator192 #letsdothis #prizefighter #mma #jiujitsu #teamhurricaneawesome #10thplanetsandiego #tigersmallsboxing #alwaysupgrade #allianceeastlake #makejiujitsuviolentagain #teamclinchgear #warrhinoiscoming

When facing an adversary the caliber of Pico, a fighter has to be aware that the takedown could come at any moment and that it’s very likely they’ll be put on their back. Fighters can often times become so focused on stopping the takedown against an elite wrestler that they’ll lose all mental focus when they’re put on the canvas. Don’t expect to see the 1,000-yard stare from Kruchten, who comes from the vaunted 10th Planet Jiu Jitsu headquarters.

“I’m OK on my back,” Kruchten boasted. “My coaches laugh when fans and analysts say he’s going to take me down. I don’t care. Take me down and let’s have some fun. Aaron and his camp know very well that I’m out of 10th Planet. If he takes me down, I’m not scared. If I grab an ankle, I promise you I’ll be bringing a leg home. But I’m definitely looking for that D’arce all day.”

The 10th Planet system figurehead Eddie Bravo made a career off overcoming the impossible. From overcoming the vaunted Royler Gracie and establishing his band of renegades in the tradition-rich world of Brazilian Jiu-Jitsu, Bravo’s bravado for not caring about outside perception has rubbed off on his students, including Kruchten.

Faced with a heavy favorite who sports a litany of credentials and skyrocketing amounts of hype, Kruchten enters the contest with nothing to lose and everything to win. After all, he’s stared death in the face. How can Pico compare?