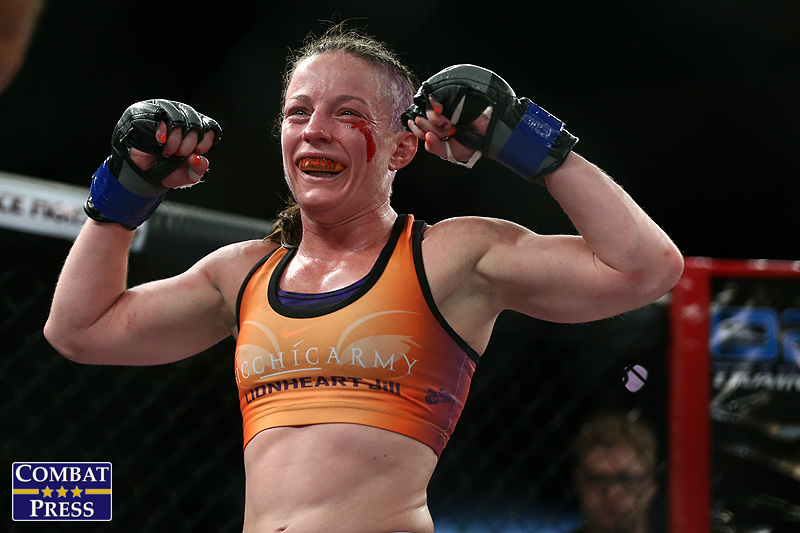 Instead of my normal preview for the weekend, I wanted to do something different this week. It is really important to me to help young fighters, especially female fighters. Young female fighters are the ones most likely to be taken advantage of in our sport. They can sometimes be lured in with bad advice, given false hope, and be tricked into making bad career decisions.

So, what I thought I would do is go over some advice on certain topics and point out certain things to avoid. Anything that is not covered here, always feel free to hit me up about on Twitter: @lionheartjill.

Do you need a manager?

As a fighter who has had a manager since midway through her amateur career, I still say the answer to this question is that you do not need one. However, there can also be benefits to having one.

Let me use Invicta FC as an example, because we, as females, usually set Invicta as the promotion we look to get into. If you are good enough and belong in a promotion like Invicta, then most likely they are going to find you. Word of mouth travels. If your name is out there, then they are going to see it and research you. That being said, a manager can help speed up the process.

A manager can get in contact with a promotion. They can send the promotion your highlight reel and resume. This is especially the case if they already have a track record with that promotion. I won’t name my manager here because this is not an advertisement for him and he wouldn’t want that either. Again, I started with him midway through my amateur career. Before I was ready to turn pro, he had already started communicating about me. It sped up the process so that they had a contract waiting for me when I was ready to turn pro.

What do you look for in a manager?

Don’t take their word for it, though. Anyone can say they’ve done something. Make them prove it. If they say that they got a certain person into a certain organization, then find out if they really did that or if they were just along for the ride. There is a difference. Someone who helps get the contracts signed is not the same as someone who is in the background and finds out about the contract after it’s been accepted.

Also find out if fighters have gotten rid of them. Have they been fired? Why? Talk to the fighters who terminated their relationship and see why that happened. Was it an amicable parting of ways? Were they let go for not doing an effective job? Talk to the manager’s current fighters as well and find out why those fighters are sticking with him or her. Maybe the fighter that fired the manager had unrealistic expectations, so their version of the story is skewed. This is your career, so make sure to get all the input that’s available.

Remember, too, that the manager works for you. My manager has a saying: “This is the one instance where manager doesn’t mean boss.” That’s a fact. You are the boss. They work for you. Read that contract before you sign it. Make sure you have an out clause, where you can leave, and that you are not tied to that manager in terms of your likeness or financially should you decide you want to leave.

If you make your pro debut too early and are not ready, then you are going to suffer losses. When those losses start to pile up, no one is going to continue to pay you to do this. If you have an upside-down amateur record (more losses than wins), then you probably are not ready.

I had offers to turn pro very early in my amateur career, but I knew I wasn’t ready. Luckily, I had people around me who also were not afraid to be honest with me and tell me I wasn’t ready. I was 8-1 as an amateur before I turned pro.

If your record is upside down, that is OK. You can improve. You can keep building your game. As an amateur, you are able to try to implement those improvements and see how they work in the cage. If you turn pro and haven’t built those skills, then you are now fighting better opponents who likely have built those skills and are at a more advanced stage in their development.

Suddenly, you are a pro, and your record really counts. Your record suffers, losses pile up, and you are lucky if you are fighting for $300/$300 ($300 to fight and $300 to win). If you lose that one, then you just got $300 to get punched in the face over and over. Is it really worth it? Hell no!! Oh, and from that paycheck, remember to subtract travel costs, time off from work, and potential coach and gym fees. Now, what’s left?

There truly is nothing wrong with an upside-down record. A lot of great fighters started out that way. Just be real with yourself and take the time to set yourself up for long-term success.

Offers that are too good to be true.

This is really an extension of the previous point. If you are that fighter with the upside-down amateur record and some promotion is trying to lure you in with a multi-fight pro contract, ask yourself why.

There are great promotions — Invicta FC, Cage Fury Fighting Championships, and the Legacy Fighting Alliance, to name a few — that are looking to gradually build a fighter’s resume and move them to the next level. Each fight they give that fighter is a tougher fight than the last one. This is the right way to build up a fighter.

They will tell you they see great potential in you. They will tell you everything you want to hear. But then, how do you sell a car? You sell the car by making it sound as good as you can. Meanwhile, the promotion is most likely saying to themselves, “This girl has a good following. We can sign her and use her to get a win for (insert name here), then move on.” Remember, those multi-fight contracts are not necessarily multi-fight contracts. Usually they have a clause that says you can be cut at some point. Don’t be the padding in someone’s padded record.

Know the difference between fans and followers.

I do not judge anyone for how they portray themselves on social media. We all have our own preferences and what works best for us. What works for me might not work for you, and vice versa.

Followers are the ones who will like your pictures on Instagram and retweet your photos on Twitter. This is great. These people help your exposure and are good for you.

Fans, though, are the ones who buy streams of your fights, purchase your walkout shirts, and support your sponsors. Make sure to give them attention, because they are the ones who are really supporting you. They are putting money in your pocket, and that deserves appreciation. Whether they have five Twitter followers or 5,000, show them some love. They support you, win or lose, fame or no fame.

Respect those who came before you.

You will often see me show my respect and appreciation to people like Julie Kedzie, Kaitlin Young and Miesha Tate, among others. In addition to just loving to watch them fight, this is because they made it easier for me. People came before them and made it easier for them, too. People today are making it easier for you.

Julie, Kaitlin and Miesha weren’t the first, but they were the ones doing their thing when I got started, so they are the ones I first got exposure to. I got to see them in promotions like Elite XC and Strikeforce. I got to see women fighting on my television. They put up with and dealt with crap that, because they did, I don’t have to. Had they not put up with it and dealt with it, then I might not have the stage to compete that I have now. This deserves and demands respect.

Yes, there were great athletes who came before them, and the ladies I mentioned certainly aren’t the only ones. However, I named them because they are amongst the ones I latched on to. Right now, there are women in this sport still dealing with stuff and kicking down doors that are going to make it easier for you. Make sure to show appreciation for that.

Never compromise yourself or your morals. If you are comfortable posting sexy photos, awesome. Do what makes you who you are. However, if you are not comfortable doing that and don’t want to be seen that way, then don’t let anyone tell you to do so.

Talent rises. Don’t sacrifice what you believe in for short-term success. Be who you want to be and worry about long-term success. Anyone who tells you that you need to portray yourself a certain way does not have your best interest at heart. It might get you some “cool” opportunity now, but you’re going to look back in a decade and wonder why you did it.