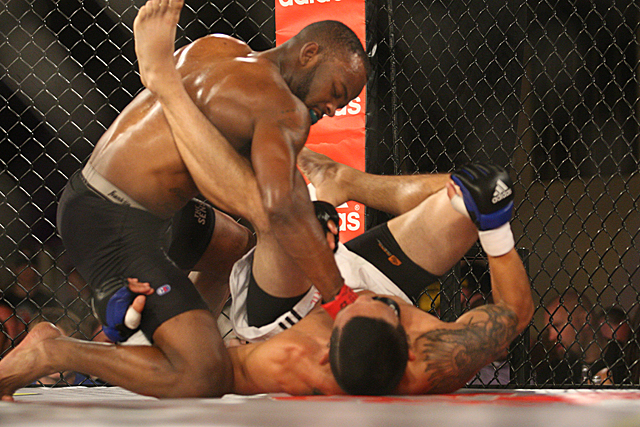 Like many athletes, Legacy Fighting Alliance flyweight Ken Porter has been on both sides of the boxing-vs.-MMA dynamic. So, also like many athletes, “The Sensation” has his own perspective on the big fight this month between Floyd Mayweather Jr. and Conor McGregor.

“It’s different for a guy who’s never fought as a boxer before,” Porter told Combat Press. “But I won’t say [McGregor] can’t compete with Floyd. But it’s also a different ballgame when you’re going 12 rounds — it’s tough. The most I ever did was six rounds, so I think it’ll be tough for him. Floyd’s gone 12 rounds for his entire career.”

Porter’s point of view comes from his experience as a pro boxer, where he sports a record of 4-0, and his pro MMA career, where he holds a 10-3 mark. Porter still enjoys both endeavors, but his current combat sport of choice is MMA.

“It has a mixture of everything,” Porter said. “It helps me turn everything over and adapt. I’ve fought guys who go for the takedown but have no stand-up game. It helps me become more well rounded. The boxing stance is different too — in MMA, you have to block kicks but keep the same stance.”

Porter’s desire to evolve, adapt and become more well rounded has led him on a journey both domestically and internationally. Porter spent time in Thailand last year at Tiger Muay Thai, one of the most well-known Muay Thai gyms in the world.

“I like to travel to get different looks and keep building my confidence,” Porter said. “Thailand has a lot of highly talented guys, and Tiger Muay Thai has a good track record with MMA. All the fighters there have different styles to help me adapt in my stand-up. It was a different climate there too, which helped with my cardio.”

A career spent on the regional MMA circuit, where Porter has competed in organizations such as the former Resurrection Fighting Alliance, Titan Fighting Championships and Shamrock FC, is aiding his growth as a fighter. Porter has also seen the sport itself experience growth through the regional circuit.

“It’s grown a lot, especially the 125-pound division,” Porter said. “We’re being noticed a lot more and people can see that we’re very entertaining. We can do more in 15 or 25 minutes than a lot of fighters.”

Although Porter competes in MMA, boxing and Muay Thai, his main goal is to join Mighty Mouse in the UFC. First, he has to get past Sid Bice, who holds a 7-1 record, at LFA 19 on Friday, Aug. 18. Porter described Bice as a “talented fighter,” but added, “I’m ahead of him in all aspects. I’m faster than him, and I’m ready to take the fight wherever it goes.”