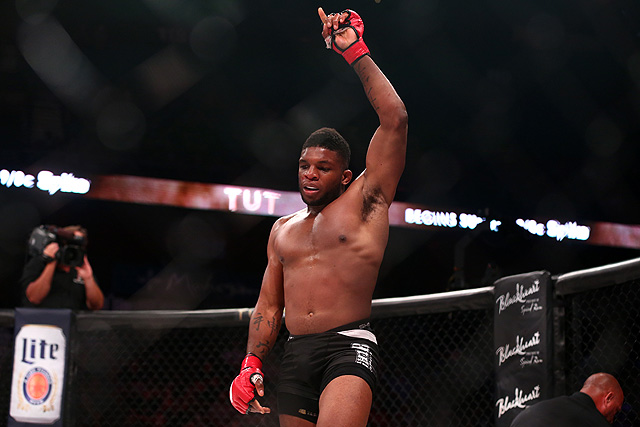 Bellator MMA will travel across the pond to England for Bellator 179, which takes place at the SSE Arena in London.

The co-main event houses two of the top British fighters on Bellator’s roster. Linton Vassell takes on former Bellator light heavyweight champion Liam McGeary. Vassell is currently riding a big two-fight winning streak with victories over former champion Emanuel Newton and UFC veteran Francis Carmont. McGeary took on promotional newcomer Brett McDermott in his last fight and was able to get back in the win column with a second-round TKO due to injury.

Also for the main card, heavyweight Augusto Sakai takes on Cheick Kongo, Dan Edwards will fight Alex Lohore in a welterweight battle, and the crowd will get treated to the return of “Baby Slice” when Kevin Ferguson, Jr,. takes on D.J. Griffin at a catchweight of 165 pounds.

The preliminary-card portion of Bellator 179 will air on Spike.com beginning at 7 p.m. ET. The main card airs on Spike TV at 9 p.m. ET.

Will Rory MacDonald burst onto the Bellator scene and dominate, or is he in for an embarassing night when he meets Paul Daley?

Out of all of the fighters Bellator has signed from the UFC, MacDonald is the most anticipated fighter. This is a great first outing for him against an established name. Daley is going to try to drag this fight as far as he can into the striking department.

A loss to Daley wouldn’t necessarily be “embarrassing,” as long as MacDonald comes to fight. If MacDonald were to come out extremely flat and get dominated from bell to bell, it would be a different story. The chances of a one-sided drubbing seem very slim, though. MacDonald always comes with his A-game regardless of opponent.

MacDonald has the edge in both grappling and striking over Daley. Daley’s got the power to put MacDonald on his back with a strong knockout punch. Outside of that, Daley doesn’t have much of an alley to get the victory. Daley needs to turn this into a brawl, and even then, it isn’t like MacDonald hasn’t been in his share of brawls. He even faced Robbie Lawler in what is an all-time great slugfest.

Linton Vassell already holds a big victory over UFC veteran Francis Carmont. Can he keep up the momentum and get past former Bellator titleholder Liam McGeary?

Yes, he can. Now, whether he will is a different story entirely.

McGeary has been one of the best light heavyweights Bellator has ever had. Sure, he lost his belt to Phil Davis, but that was an extremely predictable result against one of the UFC’s elite. McGeary didn’t have the takedown defense or ability to beat Davis in the wreslter’s slow-paced fight style. McGeary is a very dynamic fighter and likes to press the pace. When he doesn’t get a chance to work his striking, it makes it hard for McGeary to get it going. A slow fight doesn’t fit McGeary at all.

Vassell will also probably look to exploit McGeary on the ground, but his grappling isn’t nearly as good as the grappling of Davis. McGeary is pretty offensive in the grappling department. The former champ does have some rough edges in finishing submissions and overall defensive aspects of the ground game, but he can set up a sweep or a submission if he needs to.

McGeary should be able to keep this on the feet and pick away at Vassell. Vassell hasn’t been knocked out in seven years, so it’s doubtful we see a finish. Instead, look for a hard-fought decision victory in favor of McGeary.

We’ll travel to the prelims for this one: Jamie Powell and Amir Albazi.

This is a fight between two young guys with good records. All nine of Albazi’s victories have come by way of knockout or submission. His undefeated record bodes well for his future if he can get past Powell. Powell, on the other hand, is coming off a loss. This is another fight for Powell on home soil, so it should help propel him to a good performance.